In many parts of the world it's common for people to walk a lot. Sometimes they'll walk long distances - hours, days - to get where they need to go. It used to be pretty universal. 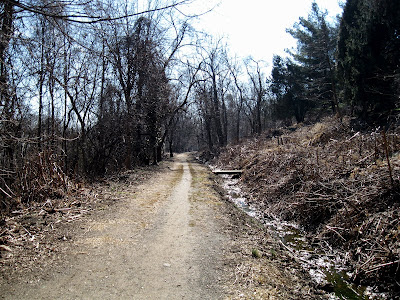 When I was younger I thought this just happened, that you could get up and start walking and just spend the night wherever you wound up. I was disappointed to discover, in Christopher Wren's Walking to Vermont for example, but also firsthand, that there are large sections of the country that are really very inhospitable to people on foot. To a large extent, it's because major roads have been built for cars with almost no thought to pedestrians. Outside of towns and cities, sidewalks are scarce, shoulders are narrow, and speeds are high. In some places, pedestrians are harassed, particularly outsiders.

My first reaction was to praise long-distance trail projects, like the Appalachian Trail or the Pacific Coast Trail. Certainly, people do take long walks on these trails, and they're great for spending time in nature, getting exercise and seeing pretty mountains. But if you've ever hiked on them, you'll know that they're not very practical for actually getting anywhere. They usually don't go through population centers: Harper's Ferry, West Virginia is one of the few towns that are actually on the Appalachian Trail.

The first reason for that is that land in towns is expensive, and walking trails didn't provide a good return on investment for either private companies or governments to spend the money to develop them. The second is that they piggyback on existing trails, many of which were made for visiting mountaintops. While it's great for hikers to climb Bear Mountain on their way through the Hudson Valley, it's not really the most convenient route to get from, say, Peekskill to Middletown.

I then got interested in rail-trails like the Old Erie Path pictured above, and other linear parks like the Old Croton Aqueduct.  I love walking on these trails, but the rail-trails make me sad because they use infrastructure that could be used for trains.  Because of this, I get a bit disturbed by the intensity with which people cheer rail projects like the Walkway over the Hudson, the "Queensway" and the "Low Line."  It's clear that there's a real hunger for comfortable places to take long walks with nice views, and I don't want that hunger to eat up all the railbeds we have left.

I developed an interest in stories about people walking long distances, and looked for older ones that went back before all those roads were built and filled with cars.  Three that I can particularly recommend are Russell Shorto's The Island at the Center of the World, Graham Robb's The Discovery of France, and Jerry Ellis's Walking to Canterbury. It turns out that in a lot of circumstances it wasn't much easier to get around on foot. There were weather problems, brigands, lack of food and difficulty finding or affording places to stay. There were also difficulties such as not having a good path to travel or losing the path.

One thing that's very striking about the more recent narratives is how many times the walkers get into cars, buses and trains. Especially cars. Five hundred years ago, if someone walked from Paris to Brussels they'd have had to walk from inn to inn, and once they left home they wouldn't see their families until they came back. Today, Appalachian trail hikers regularly hitch rides to grocery stores, or get visits from family members in cars. Just about every trail journal has an entry about getting a ride to a campsite further down the trail and then hitching another ride back to complete the skipped section.

What I learned from these stories is that walking too requires infrastructure. The paths and maps need to be created and maintained. There need to be bridges or boats to cross rivers and other obstacles. There need to be places to obtain food and places to stay, and they need to be affordable to walkers. This is a lot of work, and down through the ages it's something that people have spent years setting up. This infrastructure doesn't just happen.

It's actually quite a tragedy that country roads used to be places where people could walk, but with the number and speed of cars these days I wouldn't want to spend a month walking along them. When I was a kid I once visited coastal villages in Italy and Greece, and one thing that impressed me so much - impresses me to this day - is how they had well-maintained footpaths to other villages. I'm talking paths paved with stone, but too steep and narrow for cars. They were much more direct than the roads, because they didn't require all the hairpin turns. They weren't hiking trails or rail-trails or carriage roads. They were footpaths, built for people to get around.

In a recent Strong Towns podcast, Chuck Marohn talks a bit about country roads. He points out that most country roads used to be much narrower, and unpaved, which made it hard to travel at speeds above twenty miles per hour. And in fact, when I visited Africa several years ago, the road that a friend took me on would have been difficult for a four-wheel drive SUV, and much more so for an ordinary sedan. We never worried about a speeding car coming around the corner, because it was impossible for anyone to speed on that road.

Local governments across the country are facing budget problems, and Chuck argues that a big drain on the budget is the cost of maintaining all these wide, paved roads that serve a small number of travelers.  States across the country are already converting some low-traffic asphalt roads back to gravel to save money.   Beyond the cost savings, it'll be safer and more comfortable to walk on those gravel roads.  Hopefully that'll also satisfy our hunger for country walks, so that we can use the old rail lines for their original purpose.

Thank you for your article. I think I grew up with the same belief that you could simply walk places. There is a certain nostalgia that goes along with this belief, which you write about beautifully.

You might want to watch the The Way (2010, with Martin Sheen), a movie about the pilgrimage to St James. If there is one sort of walking trail culture that endures today, it is those of pilgrimages.

The culture around these trails encourage them to pass through towns and villages, and there is a whole economy surrounding the hikers.

Capitalism is about speed, and walking is slow. I bought a book for my kid that gets at Thoreau's thinking about this:
http://www.henryhikes.com/hikes/hikes.html

Switzerland has a fairly well developed network of walking paths, partly through public rights of way through fields, partly on public roads. There's signposts all over the country telling which way to walk to various nearby (and not so nearby) destinations along with a distance and walking time. I've seen signs with a walking time of 7 hours, which implies that someone does those sorts of walks.

Part of it may be that so much land is in private hands, and they don't like "trespassers". In Europe, you just walk, and you may actually walk on some path through some farm; or through some forest without noticing it. At some point in the states I stated my desire to just walk into the woods, and I was told I might get shot walking across somebody's property.
Foot paths don't need to be maintained _that_ much, the form fairly naturally. As far as infrastructure along the way - if there are small coherent towns along the way (not an American thing), then one doesn't have to invest a whole lot.

Thanks! I agree completely. After spending summers in England, with its wonderful walking infrastructure (stiles!), and in Greece, with its different but also fantastic infrastructure, it's always hard to come back to the US, where you can't even walk freely, as in Norway (allemanesretten, or something...), over private land. In Greece, I think a lot of those stone paths were built not only for people to walk on, but also for animals. The one just under the house we've often lived in was traveled daily by old men and their donkeys, walking back and forth to their fields. ANyway, thanks!

Unfortunately, one aspect of "improved" roads is that they're widened and straightened. Gravel or not, that will remain, and so will the speed that it brings.

"one thing that impressed me so much - impresses me to this day - is how they had well-maintained footpaths to other villages. I'm talking paths paved with stone, but too steep and narrow for cars."

In European countries, it's common for groups of rural houses to be directly accessible *only* through walking paths. Cars for all the houses are parked "at the road" at the end of really quite long paths.

This is a solution to the country road problem. It does involve some hauling of goods with handcarts, but so what?