Food trucks have been in the news recently. National Public Radio, in particular, has been interested, and particularly in New York. In April, Planet Money's Robert Smith tagged along with the Rickshaw Dumpling truck. In May, Leonard Lopate interviewed three food truck owners. In June, Ilya Marritz exposed the dysfunction in our city's permitting system. 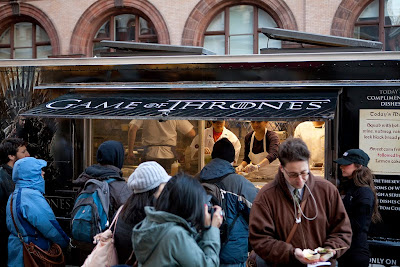 When you play the game of parking, you win or you die. Photo: CampfireNYC2011 / Flickr.
Tonight on Twitter, Alon Levy and Stephen Smith pointed out that even the Arab Spring is related to food carts: in December 2010, Mohamed Bouazizi set himself on fire after he was forcibly prevented by government officials from selling produce on the street and then denied any appeal, shouting "How do you expect me to make a living?" before lighting the match.

Like Stephen, I have mixed feelings about food trucks. I've enjoyed their food and I appreciate how they foster dynamism and experimentation with food. I would prefer to see them run their refrigerators, and other electrical appliances from the grid rather than by gasoline-powered generators or compressors. In my hierarchy of street space allocations, I put the high-energy-use trucks above general parking, but below taxi stands and delivery loading zones, and way below low-energy-use retail like hot dog, ice cream or tamale carts. If the city, the business improvement district or property owners were to provide them with grid electricity, I would be happier. I also wouldn't mind seeing small, cheap storefronts with takeout windows instead.

Any way you slice it, given any parking space in the city, I'd rather see a food truck there than some bureaucrat's government car, or a curb cut for a car wash. But that's the problem that Smith, Lopate and Marritz's interviewees all highlight: food trucks never had priority for curbside space, and now in most of the city they are in fact prohibited from using it.

That in turn connects this issue with the issue of curbside bus stops that I discussed a couple of weeks ago. Where there's a fight over curb space, chances are you'll find it's underpriced.

Right now, an army of NYPD officers are employed to keep curbside space clear for private cars and curb cuts. It would be simpler, and probably require a lot less policing, if the city set up two marketplaces. One would be for short term rental: fifteen minutes to 24 hours, run like the SFPark pilot. Another would be for long term use.

You could have separate leases for morning, afternoon, evening and night parking, and even by day of the week. We could bring back separation of church and state on Sundays, and if the Temperance Tabernacle of Our Lady of Chastity wants parking for their parishioners, those parishioners need to outbid Dave's House of Drinkin' and Whorin'.

It's not a perfect system, and it may turn out that all on-street parking is dominated by big churches, curb cuts and dentists. It may need to be tweaked to provide adequate opportunities for buses, food trucks, fresh produce and pop-up parks, but I can't imagine it would be worse than what we've got today. At the very least, the people who use that space for personal vehicles would have to pay for it.
Posted by Cap'n Transit at 8:47 PM

This is a very interesting idea. It would be rife with unfairness because basically the rich would get curb space and screw everybody else. A way to maybe get around that is allocate multiple spaces on any given block and have each business type compete. For example one space could go to food trucks or produce trucks or even a generic seller's marketplace. They bid among each other for the space. One space could be allocated to brick and mortar restaurants/business so the cafe and the pizza place can bid it out for bike parking or cafe seating (or half and half if they are allowed to work together). Another could be for more professional or service industry. so Joe's plumbing and the dentist office would compete. Granted this is not as even and I do not think the final curb rental price would be the same for each use type but that is the idea. We can not simply auction it off the highest bidder. I think that is where some of the push back is coming from since if you set the price high enough the only people who park are the rich. (granted with great transit, walkability and bike access NYC folks have lots of options...). So to mitigate that you almost have to have a quota based system (not for normal on-street parking, I don’t think it would ever get high enough to really cause a problem except in certain spots in mid-town) for the different types of uses. Very thought provoking, thanks!

@John, the problem with your system is its sheer complexity, which gives the bureaucrats way too much leeway to just say no, especially when new uses come up that nobody had thought of before. For example, 15 years ago, there were no Chinatown buses, and I don't recall much enthusiasm about mini-parks either. And, under your system, unless someone could lobby the city to create some additional Mini Park Zones, there wouldn't be. And of course this lobbying would be difficult, becuase you'd be taking some space away from other zones, whose owners suspect that they're paying below market price and would thus try very hard to defend their entitlement. And besides, I don't think things will be as problematic as you think, because while rich people do have a lot of money, cafes and food trucks and bus companies and so on are actually making money from their use of the space, and so can afford to pay a significant part of that profit for it.

@Capn, you've basically come up with the standard libertarian solution to these sort of things: a public resource is overused, there's a tragedy of the commons, so the way to allocate it is to create property rights and a market in them. One thing that I'd worry about is the interaction of the long-term and short-term markets, because if the supply of these long term spaces is arbitrarily set, you might end up with "long term parking medallions" with all the problems that the current taxi medallion system has.

In this case, "medallions" actually make perfect sense, because there is--literally--a strict limit on the number which can be issued. Unlike taxi medallions, which are arbitrarily limited to serve the interest of one group, "curb space medallions" would be limited by the amount of available curb space, which is far from arbitrary.

John: I agree with arcady's comment, and I'd add this: it's true that the rich would get that advantage, but it's true in the same way that it's true for any other resource, say, bread. Our existing first-come-first-serve system of allocating parking is equivalent to the bread-line system of allocating bread-- and I think most of us would agree that the pay-for-it system is better. I support efforts to reduce inequality, but this is a poor way to go about it. A better way: let the city collect money from the people using the spaces, and spend money on things that help everyone, from transit to public and social services.

alai, I'm referring to the fact that even under this system, there'll be some amount of space allocated to regular parking. And the allocation of street parking is a subject of great interest to the local residents and business community. Especially when they're fighting bitterly against anyone trying to take away "their" free parking. What I'm afraid of is those people sharply restricting buses and food trucks, pretty much like they're already doing.

Of course the elephant in the room is the political question. The only way I can see of getting enough support for the proposal would be to initially issue most of the medallions to the people who believe that it's "their" parking.

As for regular parking, I imagine that currently metered spaces would stay metered. If the cost of parking medallions rose above the cost of metered parking (also market-based, of course) the parking agency could issue a new medallion and decommission the meter, and if the metered parking was more expensive, the agency could buy back medallions at the going rate, and install new meters.

Of course the downside of the plan is that it means that the city forgoes a huge potential revenue source, and the initial allocation would probably end up being unfair in some way (one per household? what about people who have two cars? none?) but it's probably the best that can be hoped for, and in the long run I think it's worth it.

alai, I still don't think that "medallion" plan can work, for the simple reason that there are almost certainly more people who think the parking spaces are "theirs" than there are parking spaces, because obviously not everybody leaves their car parked in the same place all the time. And once people get those medallions, they'll have their very own personal parking space, which they will never, ever give up, like a rent controlled apartment (or a taxi medallion). And of course, the medallion owners will have a huge vested interest in making sure that the parking agency never issues another medallion, so that the price stays nice and high. And this'll make it very expensive to ever do any projects that eliminate any street parking, since it'll have to be bought out. Another problem is that metered spaces are often also the same as overnight residential parking, because the meter hours are generally only until 7 pm, and not on Sundays. Generally, I just don't see the point of introducing a system designed to artificially restrict a market to a context where the market is already restricted, by the physical availability of parking spaces.

The medallions shouldn't guarantee a parking spot, but instead be a share of the revenue from the parking, which should be entirely metered and "market"-priced (to the extent practicable). If the resident parks their car at night, they would pay for that and come out roughly even.

So the medallions do little except "buy off" the existing users. Of course it would be better if you didn't have to, but the system works the same either way-- there's just less revenue available for the city.