They paved some crap, and put up a parking lot

There's too much parking in New Jersey Transit's plans to restore passenger service on the Northern Branch of the Erie Railroad. There are many reasons why it's too much, but in this post I want to focus on one reason that doesn't apply: they aren't going to pave paradise to put up these parking lots.

I had been all ready to lead, months ago, with stories of beautiful old buildings and verdant glens bulldozed for parking lots. And if I had less scruples, like some NYU faculty and Greenwich Village NIMBYs, I might just have gone ahead with that. But I believe in supporting my opinions with facts, so I actually went to see the places where the new stations will be built. 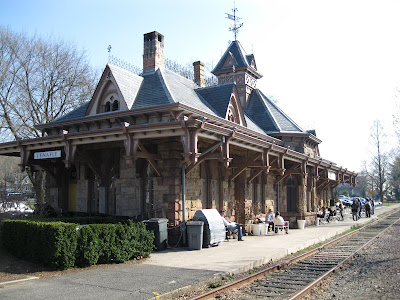 Some parts of Bergen County are actually pretty paradisaical. I found some beautiful old buildings and verdant glens, but they're not anywhere near the planned parking lots. Many of the lots will just take over existing parking lots that are currently used for something else. There are a few buildings that the New Jersey planners want to tear down, but I can't get excited about any of them. 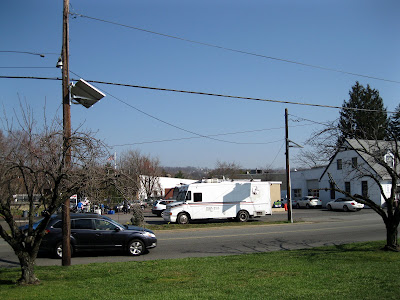 New Jersey Transit plans a 570 space surface lot on 8.6 acres of land that currently holds an auto body shop, a couple of crappy strip malls and a bunch of small parking lots. 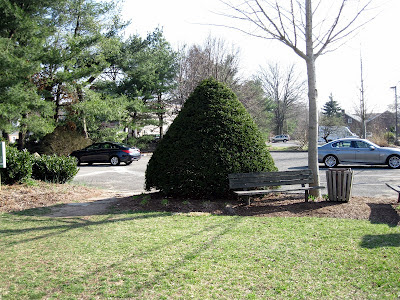 There would be a 40 space lot for kiss-and-ride and "handicap" parking on the site of a 15-space municipal lot. How they're going to shoehorn the 25 spaces in there I don't know, but this is already an ugly parking lot. 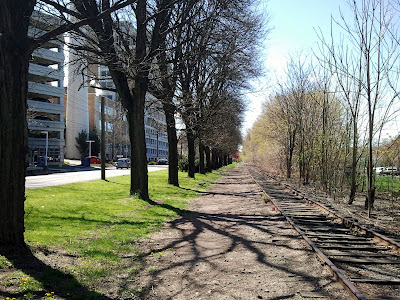 No additional parking. I think they figure that anyone who wants to drive will drive to the Route 4 or Tenafly North station. 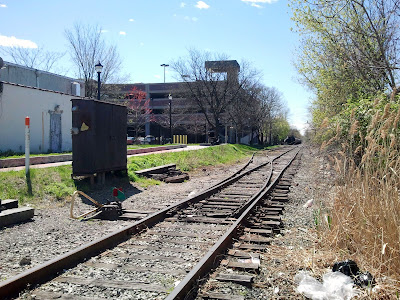 The station will be next to an existing 500-space municipal garage. The planners basically say that downtown Englewood is overparked. "Within one-third of a mile from the station there are approximately 1,003 on-street parking spaces and 708 off-street parking. Two municipal lots that currently provide 138 permit spaces, 27 metered spaces, and 43 free public spaces are located near the station site. An approximate 500-space parking deck completed construction after the survey was conducted. The spaces were added to the capacity totals. Observations indicate that time-limit on-street parking restrictions are prevalent near the proposed station. Of the 1,711 spaces that exist in the area, 888 were occupied, leaving approximately 823 available spaces." 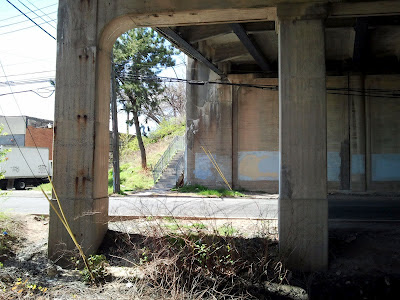 This is where the most parking is planned, because the planners want drivers to just pull off Route 4 and park. If the Preferred Alternative to Tenafly is built it will be a garage with 430 spaces. If passenger service terminates at Route 4, they will build 870 spaces. The site is currently occupied by a warehouse. I couldn't see much of it through the trees, but it didn't look all that exciting. 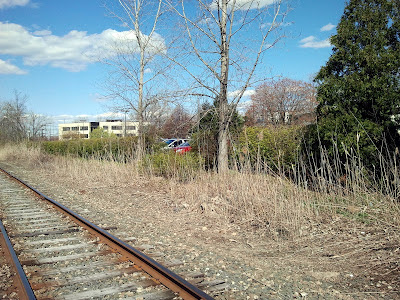 There is a very Nineties office-park style office building next to the station, with 172 parking spaces. New Jersey Transit plans to build a deck on top of that lot holding 550 more spaces. 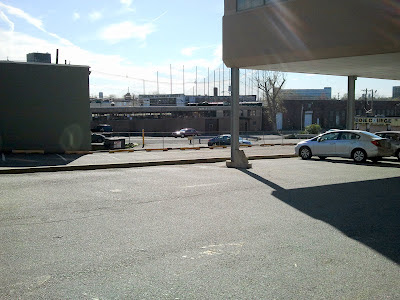 The plan is to knock down these warehouses and strip mally retail and build a 320-space parking lot. I was really ready to fight for these buildings until I actually saw them. 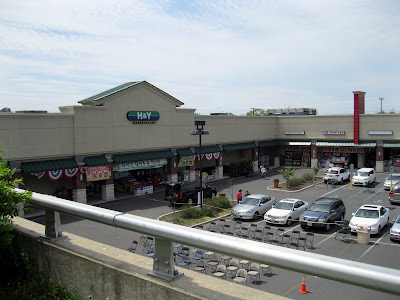 This new strip mall is pretty uninspired. It would be torn down and replaced with a 350-space parking lot. I don't think anyone would miss it, as long as they could get their kimchi someplace else. The plan would put a 40-space handicap/kiss-and-ride lot on part of the back lot for this hideous strip mall. Parking for parking.

So New Jersey Transit isn't planning to pave paradise to put up these parking lots. But fear not, fellow park-and-ride haters! There are good reasons not to build so much parking. I'll get into them in another post. If I can't do Joni Mitchell I can at least do Donald Shoup.
Posted by Cap'n Transit at 12:51 AM

The right-of-way passes through a bunch of parking lots in Englewood and Tenafly town centers. It should be interesting to see how they deal with the crossings, actually.

The other problem is that they plan to do traffic "mitigation" in the vicinity of the parking lots. For example, Fort Lee Road at Grand Ave in Leonia is going to get widened, along with the construction of the 500 car garage. It's already a crummy place to walk, this will make it worse.

how are you supposed to get to the train station without parking? what are you going to do with your car while you take the train to work?

I leave my car with a sitter when I'm at work. In a few years it should be grown up enough to stay home alone.

It's unfortunately myopic for all the pro-mass transitors to think everyone wants to live in an urban and not suburban area, forced to utilize a mass transit system, whether they want to or not. This mentality is fostered by the left who insist everyone else be subjugated to their desires but are unwilling to follow their own mandates. Mass transit is a money-losing proposition, just like all municipal parks are, and are having financial difficulties because they have grown into behemoth organizations. When does it end?

WPeyesNEars, your ability to enjoy a backyard and have decent transit service are mostly independent from each other. Don't believe me? Read the free parts from Paul Mees book, Transport for Suburbia ( http://books.google.com/books?id=D3K0FMVhcjsC&printsec=frontcover#v=onepage&q&f=false ) There is a very weak correlation between density and transit ridership.

Consider Ames, Iowa, the magical transit friendly place where Democrats are always elected, cars are banned, and everyone lives in a tenement has a transit-boardings-per-capita on par with the Washington Metro Area. So much for the myth that you have to be old, large, or dense to have decent transit service. Compare the schedules for Ames ( http://www.cyride.com ) to the schedules in most other American communities of the same size and demographics. For one, Ames has fairly decent Sunday bus service despite only having 60,000 people.

Eyes and Ears, I would be happy to let you have your suburban fantasy, but it affects me too. Car sprawl is a money-losing proposition, and it's my tax dollars at work. You're also endangering me and my family with your driving and pollution. When does it end?

a lot of people live 15 or 20 minute drive from the commuter railroad station. that's why the stations have parking.

Or you could take the bus