Chuck and Ian had a whole podcast about Amazon Prime and the revolution they believe it will bring about in retail. I agree that this is part of a new phase in the retail revolution that started in 1994, but it's by no means the most exciting one from an urbanist standpoint. Amazon Locker Delivery actually have much more potential to change the way people live. 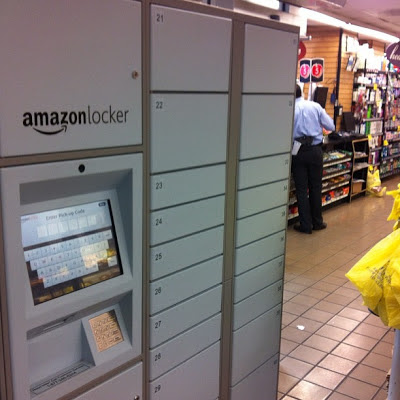 Photo: Andrew-Hyde / Flickr
First, services like Amazon Prime and FreshDirect only work in certain areas. In wealthier urban areas, like the Upper West Side where my dad used to live, there are doormen to receive packages. In rural or semi-rural areas like where Chuck lives and Ian vacations, if nobody's home the delivery person can just leave valuable items on the porch. For potential thieves, it's not worth the time and money to drive around to every house in Brainerd just in case there's a brand new Wii sitting on the porch. There is also a strong probability of being discovered sooner or later, if a thief keeps canvassing the same area.

But let's acknowledge that not everyone in the country can get secure home package delivery when they're not there to receive the packages.

When I lived in the South Bronx there were no doormen. There was no intercom. If you didn't have a key you had to wait outside until someone who lived there let you in. There were a couple of older men who hung out in the lobby or on the front steps during the day, partly to socialize, partly as volunteer security. I didn't live there long enough to get to know them well, but if I had they might have been willing to sign for a package. As it was, I never knew for sure if they would be there on a given day. There wasn't much theft in the neighborhood because nobody had much that was worth taking, but I still wouldn't have felt comfortable asking a delivery person to leave a valuable package outside my door.

In my current building in Queens there are no doormen and the delivery people often leave things in the hall, but there are enough people passing through the building that I wouldn't want a computer left there. Just last week I heard about a neighbor who may have had a package stolen from her doormat.

This is why Amazon Locker Delivery is such a big deal. Earlier this week I ordered an item from Amazon, and requested delivery to a locker near me. A few days later I got an email telling me my package had arrived, with a six-letter code. This morning on the way to the train I went a few blocks out of my way to a 7-11 store. There's a bank of lockers along one wall of the store with a touch screen. I put in the code I'd gotten in the email and one of the locker doors popped open. Inside was my package. I could have taken it and walked right out, but I bought a donut while I was there.

I didn't have to make sure I was home when the UPS guy came. I didn't need to give any special instructions. I didn't have to pay for a post office box that I would only use a few times a month (and that can't receive UPS deliveries). The 7-11 is open 24/7, so I could have picked up my package at 4AM on a Sunday if I wanted.

The downside is that you can only get deliveries of things you buy from Amazon. UPS has a similar service where you can get deliveries from anywhere, but only when the store is open. It also costs five dollars extra, or a Premium membership.

Of course the best thing is if there's a business that anticipates things that you might want to order. They might get a big delivery and keep it in stock, and you can just walk over and get one. There's one near me, and I use it more than either UPS or Amazon. It's called a store.
Posted by Cap'n Transit at 9:30 PM

For a similar problem, try picking up a trans-border (Can-US) shipment! If it even clears customs without a broker, the shipping cost is significantly greater. There's a company in Sumas, WA and Abbotsford, BC, Letterlock, that specializes in receiving and shipping packages for this market. I believe they charge $3.50 for receiving your shipment.

This isnt new at all though. When I lived in Boston, several retailers within .5 miles of my apartment offered a service where you had the package delivered to them, and theyd hold it for $3.

No expensive lockers needed, no amazon-only.