Last month I told you how much the Pulaski Skyway degrades our urban environment just by carrying 30,000 cars into Manhattan, and observed that Chris Christie is planning to rebuild it using $1.8 billion that had been dedicated to building the ARC train tunnel. Now the New Jersey Department of Transportation has announced that for the first two-year stage of the rebuilding they will close the Manhattan-bound half of the highway beginning "after the Super Bowl" in February 2014. 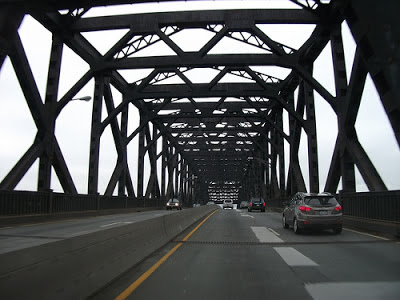 Photo: Dougtone / Flickr.
I'm going to let this comment by Jeff Tittel, longtime director of the New Jersey Sierra Club, pass without comment for now: "There are ways to fix the Pulaski Skyway without creating a traffic nightmare. They should just build a new parallel span to replace the Skyway."

In my opinion it's great that they're shutting down the Skyway; if they would only leave it closed we would be making progress. But what about New Jersey residents who need to get into the city (or into Jersey City)? Janna Chernetz of the Tri-State Transportation Campaign hits it on the head: "To mitigate this transportation nightmare, Port Authority, New Jersey DOT, the Turnpike Authority and NJ Transit will need to work together to minimize the impacts to motorists and transit users," she told the Star-Ledger. "This can be done in the short term by increasing NJ Transit rail and PATH service and expanding bus service — with priority bus lanes — on area roadways."

I expect that we won't see too many people shifting to trains, because the trains are already full during rush hours, but there will probably be a decent increase in ridership on Manhattan-bound express buses. After the highway is reopened we'll probably see most of those people shift right back, depending of course on how long Christie manages to prop up the other components of car dependence like low gas prices and cheap parking.

So where to put those priority bus lanes? Well, we could always use another Lincoln Tunnel Exclusive Bus Lane. Or the shoulder lane that the New Jersey DOT is planning to open on the Newark Bay Bridge could be buses-only. But the best place to put the buses is on the Skyway itself.

If you think about it, there's no real good reason to have the Skyway functioning in only one direction. Instead of using the two north lanes for outbound cars, the New Jersey DOT could make them a two-way exclusive busway. It's true that both buses and trucks are currently banned from the Skyway, but that's not a weight issue, it's because they had too many crashes with cars. If there are only professional bus drivers using the road, the chance of a collision goes way down.

The question remains how best to accommodate all those buses in Manhattan. There's been a lot of criticism of the New Jersey Transit managers who left trains in the flood zone, with good reason, but another spectacular failure of management was the state government's bungling of the emergency bus/ferry system that replaced the disabled commuter rail and PATH lines. It illustrates the importance of terminal management.

The buses could just drop people off at the Liberty State Park ferry docks, like they did during the hurricane. They could go into Manhattan and park, further angering the crazy NIMBYs that have the ear of Daniel Squadron.

The best place to store these buses is in Brooklyn: to have them go right down West Street or Broadway and through the Brooklyn Battery Tunnel to Red Hook and Spring Creek. They could even make a few stops along the way, adding transit service for people in those areas.
Posted by Cap'n Transit at 1:53 AM

Looking at PATH timetables, during peak periods, there are 15 trains per hour on the NWK-WTC and JSQ-33rd lines, and only 10 trains per hour on HOB-WTC and HOB-33rd, so it seems like Hoboken has some spare capacity, if we can assume that 30 trains per hour is the practical limit of capacity. If there's a perfect uptown/downtown split, and you can pack 1.5 buses worth of passengers into a PATH car, that's about 100 buses per hour worth of potential spare capacity. And while it's not a one-seat ride, a fast bus to PATH might be a pretty appealing alternative to a slow bus to an NJ Transit train.