City Council Speaker Christine Quinn is running for mayor of New York. In theory I like the idea of the city's first lesbian mayor, and she seems like a nice person. She did get the council to pass congestion pricing in 2008. But overall her record on transportation has been negative, and there is no indication that she has any interest in taking a more progressive stand on the issue. 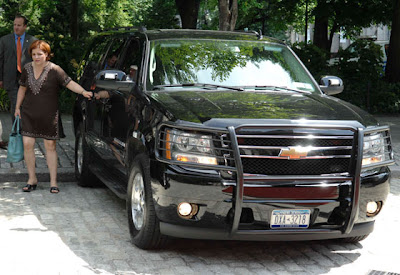 Photo: Steven Hirsch / Streetsblog
In addition to the contempt she has shown in writing, here are several actions Quinn has taken that show how low issues like pedestrian safety, fair access to jobs, clean air and water, resource conservation and protection, and prevention of global warming rank among her priorities. Thanks to Streetsblog for keeping an eye on her.

Remember these things when people ask you to support Quinn. I think we can do better.
Posted by Cap'n Transit at 12:57 AM

How about we just don't support any politicians who are literally married to their lobbyists, as a rule? That seems fair enough, though it does exclude a disturbing number of those in power.

Sorry, Nathan, I was really having trouble making that clear with all the pronouns. Giske is the lobbyist; she's married to somebody named Annie Washburn. Catullo, a product liability lawyer, is married to Quinn.

Quinn and Giske are not married, but they are close friends.

Who are we supposed to support in the primary? None of the above?

"Who are we supposed to support in the primary? None of the above?"

If none of the above are supporting us, that's reasonable.

But there are four strong Democratic candidates. I'm hoping that one will figure out that taking a different position from the car-loving transit-haters is a good way to break out of the pack.

At this stage, if Mayor Quinn doesn't force universities to shut down events for livable streets and transit investment, I'll be happy.