Cyclists have been shocked by the death last Wednesday of Mary Thompson and Peter Root in Phanom Sarakham, Thailand. The couple from Guernsey were cycling around the world and blogging their adventures when they were rear-ended by a pickup truck. 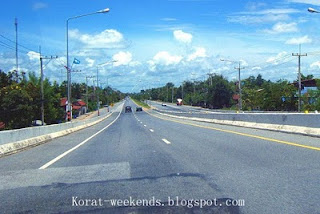 Highway 304 in Phanom Sarakham, where Root and Thompson were killed.

News reports quoted the driver as saying he "was reaching down to pick up a cap on the floor" and took his eyes off the road. The Thai tourist agency has apologized to their families, and a transportation professor said that foreign tourists should be warned about the dangerous behavior of Thai drivers.

The problem goes deeper than this, and of course it doesn't just affect European tourists. The Daily Mail mentioned that "Thailand is well known for its perilous roads, with more than 13,000 killed and almost 1million injured each year in accidents." The vast majority of these dead and injured are presumably local Thai citizens. Any response to Root and Thompson's death should make Thailand's roads safer for everyone.

Unfortunately, any safety measures would go against a strong push in the opposite direction. The road where Thompson and Root were killed, Highway 304, is listed as part of Asian Highway 19, the Central Subcorridor of the Southern Economic Corridor (PDF) of the Greater Mekong Subregion. In other words, it's one of the main routes from Bangkok to Phnom Penh in Cambodia.

Since the Greater Mekong Subregion was established in 1992, the Asian Development Bank and various governments have pumped billions of dollars into the highway network. From 2004 to 2007, it helped fund the widening of a large section of Highway 304 from a two lane country road to a divided four-lane stroad.

Mary Thompson and Peter Root may have been killed by a distracted driver in Thailand, but the seeds of their death were planted in Europe and North America.
Posted by Cap'n Transit at 12:06 AM

This isn't a stroad. It's simply an intercity road. It became much safer when it was widened, because most road deaths on undivided intercity roads are due to head-on collisions, which are now much less frequent due to the barrier in between.

Thailand road deaths are actually pretty typical for countries at its level of economic development (http://en.wikipedia.org/wiki/List_of_countries_by_traffic-related_death_rate). Further economic growth, which the widened road will help bring, will lead to more improvement in infrastructure and driving culture. In safety terms, that should be the highest priority. Certainly Thailand should focus its urban development on pedestrians/bikes rather than cars. But in rural areas, motorized vehicles are the only realistic option, and Western-style highways are the safest way of implementing that. If there is demand for intercity biking, it should take place on dedicated tracks or trains, not on the highway.

I'd believe highways were so safe if the US had a noticeable drop in traffic accidents per unit of driving when the Interstates were built. No such drop happened, and because the amount of driving skyrocketed, so did traffic fatalities.

Thailand is not in fact building its cities around pedestrians/bikes/transit. Already in the 1990s Paul Barter classified Bangkok as a car-oriented city, with higher car ownership than richer East Asian cities like Seoul and Singapore. There were already double-deck freeways then, leading to air pollution levels that dwarf those of any first-world city; the air has gotten a bit better since, but is still dirtier than first-world standards. There's some investment in transit, but not a lot of it for a city of Bangkok's size, and bus ridership has done down by a factor of 4 in the last 20 years due to growing car and motorcycle ownership, from 4 million a day to 1 million. Rapid transit hasn't picked up the slack: ridership is less than 600,000 a day in a metro area of 14 million people, and construction of new lines is proceeding slowly. Compare this with the >6 million daily subway riders in Shanghai, a city not much larger than Bangkok (23 million metro vs. 14).

1. I agree with you about the cities. Bangkok's subway network is pitiful for a city of its size.

3. If you actually look at the US stats (http://en.wikipedia.org/wiki/List_of_motor_vehicle_deaths_in_U.S._by_year), it is not at all clear that traffic accidents "skyrocketed" when Interstates were built. There was a significant rise in deaths in the early 1960s. But from 1947-61 and 1966-present, there has been continuous stagnation or decline. And even the 1966 peak was below numbers reached in the 1930s. And even if deaths did increase somewhat, much of those deaths were due to urban highways, which as I said earlier, I oppose. Upgrading rural roads, in contrast, is remarkably good for public safety.

By the way, some shocking numbers from one of my previous links:

In Togo, the number is one out of seven.

Sure, an undivided two-lane country road carrying heavy traffic is unsafe, but a two-lane road can be made safe without becoming four lanes.

I feel that it's a considerable mistake to imagine that intercity roads and urban roads are unrelated entities.

So when foreign investors, state and private, toe the western party line of more roads being the primary necessity of economic development, neglecting the option of more and faster trains instead, it's everyone whose everyday life is compromised by increasing car dominance, not just the odd cross-country cyclist.

There's been a more or less constant trend of decline in per-VMT road fatalities in the US going back to the 1920s. The Interstates didn't break that trend. To the extent that we're not just overinterpreting small changes, the sharp declines in per-VMT deaths occurred in times of sharp declines in driving in general, e.g. 1973 and the beginning of WW2, while the years when the Interstates were built were years of flat per-VMT deaths.

Thailand is one of the oldest industrialized countries in the world. Bangkok is Detroit, a modern city with lots of poor people. For cities and countries in this situation, more roads do not bring economic growth. Especially when several neighboring countries are focusing on improving their trains, especially freight.

2. Freight trains are nice, but not useful for small-scale deliveries, like that the pickup truck driver was likely doing when he took his eyes off the road. Nor are they useful for public or semi-public passenger transportation, like the jitneys that provide a high proportion of the journeys in many developing countries.

78, please watch you're language. I'm the only one on this blog who can tell people they're making up nonsense.

Wait a minute ~ first the road widening is not to be criticized in the same terms as a stroad, because this is intercity traffic, not local traffic ... and now the death is due to a pickup truck driver making a local freight delivery?