Apartment buildings near the Rockaway Branch

In 2011, Alon Levy wrote this about the possibility of restoring service on the Rockaway Beach Branch Railroad in Central Queens:

Observe the land use maps of Queens Community Boards 6 (PDF) and 9 (PDF), which host most of the Cutoff: along the Cutoff’s right of way, the primary uses are single-family residential, with only a little commercial. Moreover, the commercial development is often very auto-oriented, for example at Metropolitan Avenue. Indeed, the only proposed station with significant dense development is Rego Park, which is on the LIRR Main Line and could be restored without restoring an entire line. Rezoning near the other stations is possible, but why not rezone near existing subway stations first?

Sure, on the map there are lots of single-family residential areas, but if you go there you see things like the Forest Park Co-ops: 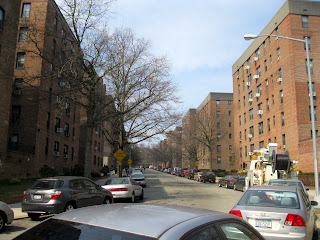 When I took this picture I had my back to the fence enclosing the right-of-way. These are dense developments, with hundreds of residents. There's another condo across Park Lane South that used to be a factory. A little further north you see Forest View Crescent: 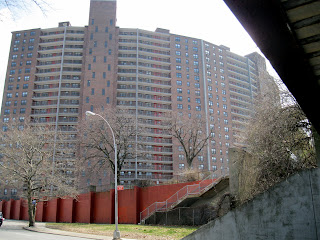 This massive twenty-story co-op sits right next to the right-of-way; in fact, one of the initial obstacles when the MTA tried to restart service in the 1960s was the fact that the co-op is using the right-of-way for their parking lot. A few blocks north is the commercial development along Metropolitan Avenue that Alon mentions: 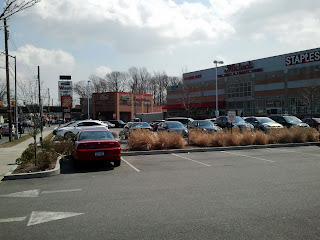 This is indeed auto-oriented, especially the Home Depot and the Metropolitan Avenue Educational Campus, but it is not irredeemable. The Trader Joe's draws people from all over Central Queens, and not just by car. Look at the number of people waiting for the bus across the street, at noon on a Monday: 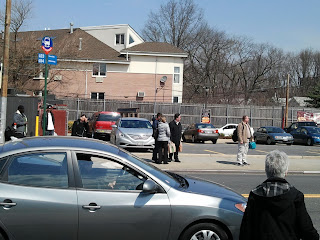 There were similar numbers waiting on my side of the street for the eastbound bus, and on Woodhaven Boulevard for the buses going north and south. Just a block east of the Rockaway Branch is the beginning of a relatively dense, walkable two-story commercial district along Metropolitan. Finally, north of there is another area of apartments around Fleet Street: 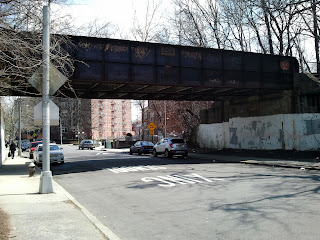 Because of this, I think the Rockaway Branch would get more riders if it had stops at Fleet Street and Myrtle Avenue, in addition to the old stations at Parkside (Metropolitan Avenue) and Brooklyn Manor (Jamaica Avenue). Between residents going to work and shopping, and people coming in to the schools and shops, there are hundreds of people who currently drive or take the bus or slow train. Rezoning the area near the Parkside station to allow more dense development would bring even more riders. 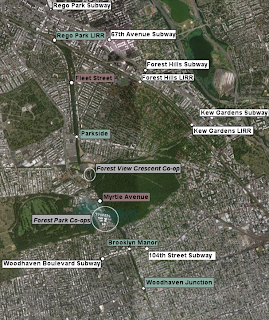 I have some reservations. The first is that usually I hear about this line in terms of demand between this area and the Rockaways, which I dont see happening. This would work for the area mentioned if it connected to the Queens Boulevard line. The problem is, i dont see where that would happen.

As an LIRR line, this is a non-starter. As Alon has covered a great deal on his blog, there is very little urban ridership on New York's commuter rail, with LIRR being even worse in this regard than MNR. Obviously this could be fixed, the LIRR could modernize, run like rapid transit within the city, and get Metrocard payment (and get relatively cheaper). Unfortunately it will likely be years before we see anything like that happening.

Also, most of the commercial development in this area is along Woodhaven Boulevard, which this subway kind of misses. Theres a reason subways are usually built under streets. When I ride the bus on Woodhaven Boulevard (to go to the auto-oriented Trader Joes incidentally, though Forest Park is also worth visiting) I usually think id like a better bus, rather than a train a block to the east (for what its worth, this bus seems to have pretty good ridership, and a lot of people DO ride it to the Rockaways in the summer). For the densest parts of Woodhaven its several blocks to the east and inaccessible through the private properties of the Rego crescent. Theres huge areas of disconnected streets and private property frontage all along this ROW (not as bad as a loops-and-lollipops suburban location, but getting there).

Those are my worries about this line in particular. In general, I also think that there isnt the means for more than one cross-town line in anything like the mid-term future. Id rather bet the farm on the Triboro RX right of way.

I dont see this as a park either, though the area of Forest Park this line passes through seems to be quite popular. Id rather leave the line for the adventurous to explore independently (I was thinking of doing so myself soon... are there any concerns with getting in trouble doing this?), though im aware that adverse possession of parts of this ROW are starting to become an issue.

This is such an interesting area of Queens. Really full of hints about how New York went wrong in the mid to late 20th century.

I don't see this having the LIRR ridership needed to reactivate the line. Any trains running from Queens to Penn Station would come at the cost of trains from Long Island, and we know what LI politicians would do to stop that from happening.

It might be able to work as a Subway.

The apartment uses the City ROW as a parking lot, by renting from the city. The city should start investigating the ROW and start charging rent for anyone else encroaching on it. The apartment isn't an issue to get the right of way, if the city works out a deal. The area of Forest Park by the apartment and Union Turnpike is mostly closed off and only used as a residence for the homeless and stray cats. Swapping a small portion of that for the train ROW wouldn't be a bad deal.

Would a Rego Park LIRR station be very useful for Rego Park residents? As an analog look at Forest Hills on the LIRR versus Forest Hills - a block away from the LIRR - on the subway. Yes it's faster to get to Penn Station. How much faster is it to get to Rockefeller Center? The World Trade Center? Any place in Queens where the local stops but not the LIRR. LIRR service would be good for people who want to get to Penn Station. The subway is "better" for any other destination.

Yeah, Adirondacker, I should have mentioned that I think rebuilding the Rego Park LIRR station wouldn't attract that many riders and would be hard to schedule.

Unfortunately there isn't an easily accessible A train Schedule on the MTA's site at the moment. You live in Ozone Park and you want to get to your job on Wall Street. Would it be faster to take the LIRR to Penn Station or just get on the A train? You live in Woodhaven. Is it faster to take the LIRR to Penn Station or is it faster to the J/Z even though the A/J/Z and take longer to get to their first stop in Manhattan? Ya wanna get to Union Square, which is faster? Especially if the subway station is a block away and the LIRR station is ten blocks away.
The LIRR isn't a good solution for people who are within the reach of the subway. Queens Blvd locals running on the ROW make better sense. ... for the Rockaways have all of the Queens Blvd locals go to Howard Beach with half of them going to one terminus and all of the A trains go to Howard Beach with half of them going to the other terminus. Time it so that people from the Rockaways have a similar experience as they do when the shuttles were running. The LIRR doesn't do you much good if you want to go to Jackson Heights. A Queens Blvd local would make it easy. And easy to get to Flushing.
.. but then a streetcar in a dedicated lane on Woodhaven Blvd with easy transfers at the subway stations might be a "better" solution.

as far as going to the rockaways on a potential LIRR, you couldn't pay me to go there. i'll drive to Fire Island or Jones Beach.

Adirondacker, i doubt the subway is faster in many of these cases (especially not once East Side Access is open), but its cheaper and its more frequent. These are issues that could be worked out to balance load between the subway and LIRR, but they havent yet and probably wont be soon.

The main problem with current LIRR services is that service patterns are extremely irregular, with no logic behind them - during the peak between Jamaica and Penn, some trains may make no stops, others may only stop at only Woodside, still others may stop at only Forest Hills, and some only stop at Kew Gardens. A Rego Park LIRR station would probably suffer from the same extremely irregular service, and service utilization would be low.

The thing is, the old Rockaway ROW is so far from Woodhaven, and so poorly connected to the bus and subway networks, that reactivation may not be worth it. There's also the fact that there's no logical place to end the line - Rockaway Blvd and Howard Beach aren't particularly strong anchors, especially as any Queens Blvd local to Howard Beach is going to be slower than a LIRR or an E train to Jamaica for passengers who are going to Jamaica. The Rockaways definitely doesn't have the ridership to support two full-size train services, so that's also out of the question.

Either a less compromised version of BRT than SBS, or an LRT line on Woodhaven would probably be more beneficial to residents, especially since the ROW's catchment west of Woodhaven is quite limited.

woodside has very little passengers so it doesn't make sense to stop every train there.

but more trains at FH would be nice. some of them are so full that on some days you can't even get inside the train.

i doubt the subway is faster in many of these cases