Suppose that you live in a detached single-family home a block from the old Brooklyn Manor train station in Woodhaven. Your neighbors are selling a house a lot like yours, containing about 2000 square feet of floor area on a 5,000 square foot lot abutting the Rockaway Beach Branch railroad embankment, for $439,000.

That's one of the few houses that can even be sold; Zillow says that 20-30% of mortgages in this area are underwater. You want to see your property values go up. Maybe your mortgage is underwater; maybe you just want to get a good price when you're ready to sell. What can you do? Reactivate the railroad. 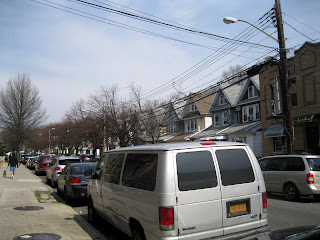 Your house is currently an hour door-to-door from downtown Manhattan on the rickety, unreliable J or Z tracks. If you're trying to get to Midtown, where there are more jobs, you would have to change for the F or M trains, adding another fifteen minutes. But what if you could cut that travel time to forty-five minutes, say by running the R train on the Rockaway Branch tracks? We don't have to imagine; we can just look at a very similar train line. 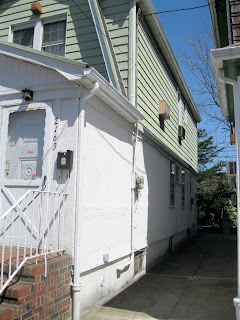 This 15000 square foot house, 2163 East 15th Street in Brooklyn, is currently for sale at $489,000. That's $50,000 more than your neighbor is asking, for a house that's a little smaller. Okay, your neighbor's house has termite damage, but it also has a huge back yard with no trains running on the tracks.

If you compare properties along the Q train in Sheepshead Bay and Homecrest you find that they're typically $100-200,000 more than you would get for "comparable" properties along the Rockaway Branch, like this 1600 square foot semi-attached house asking $729,000. And according to Zillow, only 5-10% of mortgages are underwater. That 15-30 minute difference in commute time makes a big difference in home prices. Crime is lower, too.

This may be a surprise to you. You may remember the sixties and seventies, when properties near active train lines went down in price and properties near highways went up. Things have changed. People can't afford to drive, and they're realizing that the train and the city aren't so bad.

What about the opposite problem, gentrification? Well, I took a walk through Sheepshead Bay yesterday, and let's just say I didn't see any creative facial hair or skinny jeans. Don't take my word for it; go look for yourself.

Reopening the Brooklyn Manor train station would be a huge boon to people who live nearby. But you can only do it if you get out of the 1970s mental traffic jam and ride the train into the twenty-first century. Please, sign the two petitions to reopen the Rockway Beach Branch, on change.org and on Assemblymember Goldfeder's site.
Posted by Cap'n Transit at 9:39 AM

It is not actually a positive thing that property values are going up, if it means that rents are going up. In a right-to-build situation, the higher desirability of land near the Q train would lead to higher density, as developers, buyers, and renters accepted slightly higher per-unit construction costs in order to satisfy demand for living near the subway. This is exactly what happened in the first third of the 20th century, when zoning was either nonexistent or lax. As a preexisting owner, you'd get some more money because of the extra profits that could be made from replacing your single-story house with a six-story apartment building, but not a lot.

The problem is that the price appreciation that preexisting owners get from banning new development is much higher. And this means that the incentive for owners in areas that already have subways is to make it as hard as possible for people to build more there. Instead, the demand for housing has to be satisfied in areas where nobody lives, which means new exurbs, and the occasional brownfield industrial site (SoHo 30-40 years ago, the Brooklyn East River waterfront today), which aren't anywhere near good rail infrastructure.

that's true, but building denser housing in a sea of single family homes also has negative effects for the owners who don't sell out to developers.

i have taken the train to work from sheepshead bay. i have driven through richmond hill. i bet the schools have more to do with the price difference in housing.

there is no way i would buy a house in richmond hill close to the subway after driving through there.

Alen: yes - this negative effect is that the owners can't expect large price appreciation anymore with which to fund retirement.