Stuck on the subway

Today the Times published a good article by Kimberly Matus telling the story of how she was groped on a crowded subway train. In that particular case there were undercover police officers who noticed her facial expression and arrested her attacker, but the experience was upsetting nonetheless. 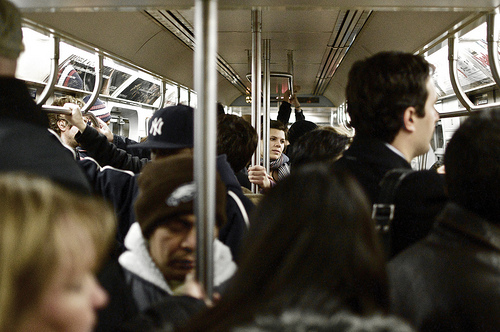 Photo: Tasayu Tasnaphun / Flickr.
What I found striking is how limited Matus's choices were in the whole situation. As she wrote, "I tried to evade him but couldn’t move an inch in any direction." What a horrible feeling. Even when I was a young man I never had an experience like that, but what little hassle I've had is bad enough. I've been yelled at, pushed, and even sent flying into another passenger by some prejudiced jerk. And that's not counting the normal crush conditions, sermons and bad music.

After this incident, Matus recognized that her only choice was simply not to participate. She says she told her husband that "I wasn't planning on taking the subway anymore, at least during peak hours." I've done the same thing. I choose hours that give me a more comfortable commute. I also live a bit further out and take jobs even further in Queens. Of course I'm fortunate that we have these options. There are many New Yorkers, especially in this economy, who consider themselves lucky to have a job at all, and if that job means they squeeze onto a number 2 train at 8:15, that's what they do. And whatever happens, they put up with it.

Matus also has a couple of alternatives. She could ride a bike, which means dealing with a lot of the same jerks, but instead of squeezing on the train in sweat pants they're in control of deadly machines (barely in control). She could take the M57 bus to the Q60, but that would take a long time, and many of those buses get packed too. Since she works for her family's taxi business, maybe they just send a taxi to pick her up. (But I do appreciate the irony of even a taxi family seeing the value in traveling by subway.) That would cost her family money, just as it costs me money to take lower paying positions to avoid the Manhattan rush hour.

What I would like, and I bet Matus would like it too, is another option. An option where we get a seat, but we don't have to pay for a whole taxi for ourselves. I'm willing to pay more for a slower ride, if I knew I would be a little more comfortable.

What I'm talking about is the Death Valley of Commute Options. You're sick of squeezing into the subway, and you might be willing to pay more for a more comfortable ride. But you can't afford to buy and keep a car (assuming you even want to put people's lives at risk and heat up the planet). So you're stuck on the IRT with the sexual predators.

I'll talk about some solutions in a future post.
Posted by Cap'n Transit at 10:40 PM

It sounds so bad to use this as an excuse for a mass exodus from the subway. Guaranteeing a seat means moving passengers to another mode, and any mode other than the subway will have much less capacity than the subway. Why not just crack down on subway groping? Tokyo's been doing that and the people I've talked to about this say there's been a marked reduction in groping. In a world of camera phones, Facebook, and Hollaback, photographing perps and sharing the photos publicly does a lot more than deciding the subway is the problem.

(In Tokyo there's also a long-term plan to reduce subway crowding, but all lines in New York are already less crowded than the target Tokyo wants to achieve.)

How do you get from that to "a mass exodus," Alon? I'm just talking about adding enough capacity to bring the load levels down to about 85% - the same target that Shoup aims for.

If we're talking about the lack of options, particularly where people don't have the means for taxis or cars, it seems that a premium commute isn't necessarily the best thing to push for.

Given that only rail can handle peak Manhattan loads effectively, the majority commuters of all genders will remain on the subway. I don't like the idea that a) women must pay in order not to be assaulted, and b) only women with a bit of money to spare can be liberated from that risk.

What I want is for that majority not to have to endure trains quite that crowded, which means more rail capacity. And the employment of whatever tactics are most effective to communicate "hey, groping people on the subway isn't ok".

I can see fewer politicians wanting to lay down concrete and steel so women can feel safer in their commutes than ought to be. A vision for concrete and steel providing all New Yorkers with comfort and providing for several decades of growth sounds more generally appealing, though it still seems utopian given New York City's very limited ability to get subways built.

So more decent commuter buses might well be the best we can achieve in the near future, but it falls short of a solution.

In Tokyo they have woman-only subway cars during rush hour...

On commuter trains in Helsinki, there's one carriage on which tickets can be bought on board. The conductor sells tickets, and at stations can dispatch the train from any door. It means installing ticket machines at stations isn't a necessary expense, but also means anyone with reason to feel vulnerable can occupy a carriage with staff in attendance.

The same model is infeasible for the subway given the frequency of station dispatch and the fact it's a gated system. But let's imagine that drivers dispatch trains like on just about every other subway, but conductors are retained with the sole duty of providing a visible presence in designated cars. Those cars could serve the same safety function as Helsinki's ticket sale car.

Speaking of vulnerability, station platforms are another site where it can be an issue. Dispatch being undertaken by a member of staff communicating with the driver, who also hung around every platform at all times, could vastly improve that situation.

These are, of course, changes in working practices that the unions would almost certainly resist fiercely. I'd be happy to see staff paid more for these duties; my values involve placing a significant monetary value upon the safety of vulnerable users. But that would require the money come from somewhere.

Cap'n, in Tokyo the target for crowding is 150%; the busiest lines are north of 200%. The load limit is defined slightly more tightly in Tokyo than in New York, but 150% of that corresponds to about 135% of New York capacity, more crowded than even the Lex.

It's an important question what load limit is tolerable, because investment in a 135% city is going to be different from in an 85% city.

One relatively cheap way to make transit feel safer is walk-through trains; SNCF is procuring such trains for regional service for safety reasons. This also boosts capacity since people can stand in the gangways. But the safety benefits are in the off-peak, when trains can feel dangerously lonely, rather than in the crowded peak, which is when groping seems to happen.

she can always take the local train. there is almost always a seat on those during rush hour

And let's add here that the NYCTA has a long history of cutting down on rush hour through put, for any number of less than compelling reasons, the least compelling of all being to improve its On Time Performance stats. I know this for a fact because, as senior manager of the IRT Schedules Section, I was ordered to whittle away at service year after year for many years running. Add to that, due to various & sundry "slow speed orders" even more peak service is often eliminated. So in the last 10 years, for example, on the Lex express we've gone from 30 TPH peak to about 24-25 TPH peak on any average weekday. It seems to me NYCTA should be trying to figure out how to run more, NOT fewer trains. Unfortunately the bureaucratic mind set is obsessed with these useless OTP stats, amongst much other rubbish.

I agree with you on articulation Alon. But NYCTA has a long standing, institutionalized aversion to articulated equipment which dates all the way back to city takeover of the IRT & BMT. That's the main reason they scrapped the newer, more reliable BMT "D" types and Multis back in the late '50s/early '60s and kept running the older, less reliable AB cars for almost another 10 years, until '69.

It you can sell the NYCTA on articulation more power to ya Alon!

@captain subway That's interesting that they're reducing the level of scheduled service. Didn't the Lexington Express have even more than 30 tph back in the "good old days"? I kind of wonder what changed from then to now, and even from 10 years ago to now, and where the reliability problems are coming from. Because, and of course this is the example I always use, Moscow can run 39 tph without any fancy ATO or moving block systems. My guess is that it's really dwell times that get you, and that what actually matters is the speed of the doors. In Moscow, the doors are fast, and it's reasonable to just wait to close the doors until there's nobody close enough to grab them, so the doors close on the first try pretty much every single time. But with the slow doors on the R-142s, there's a much higher probability of someone successfully making a run for it and holding the door, which leads to a much longer time until they're actually closed successfully. The fact that Moscow Metro doors open before the train even fully stops probably helps a bit too. A few seconds here and there multiplied by 30 tph start to add up pretty quickly.

My experience with transit in the Bronx (pm rush hours only) is that the buses are crush-loaded and the subways are not.

Didn't Philly put cameras on every bus to determine actual injuries in crashes? I'd be fine with cameras in every subway car.

I know of someone who was physically sexually assaulted on a crowded train car. The NYPD were not that helpful, and there was very little video footage to id the perpetrator.