We can't depend on the Northeast Corridor

The big news this weekend is the major derailment and crash on the New Haven line between Fairfield and Bridgeport yesterday. The National Transportation Safety Board is shutting down that entire stretch of track for several days while they do a thorough investigation, and only after that can the repairs begin. 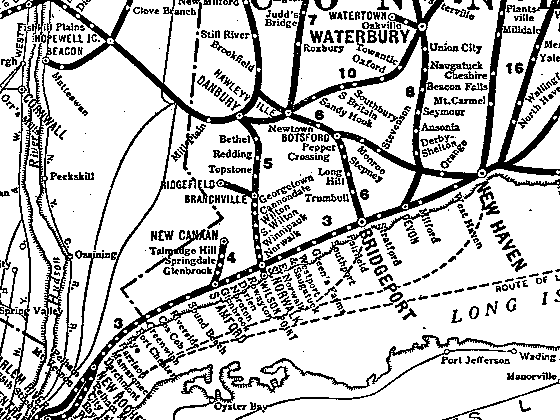 Map: New York, New Haven and Hartford Railroad in 1929.
Metro-North and Amtrak trains are suspended indefinitely in both directions, and the lack of alternative service is just pathetic. "If all the trains use the same tracks, it doesn't really seem like there are many alternatives for getting into the city," New Haven resident Robert Li told the Stamford Advocate. "Especially if you don't have a car." There were bus bridges to get people home last night, but there are no buses, let alone trains, all weekend. This evening Eric Gershon of Yale News tweeted, "830 pm Peter Pan bus NYC to New Haven packed due to Fri MetroN #train #derailment. Long lines, short tempers at Port Authority."

Jim Cameron of the appointed Connecticut Parking Garage Rail Commuter Council has been tweeting up a storm. Unfortunately, he's been talking almost entirely about where you can drive to catch a train on Monday morning, I guess because he thinks people who don't drive - or don't want to be behind the wheel in a mess like that - aren't part of his constituency. Most of his tweets about buses are along the lines of, "No way you could handle that many people with buses," but he seems to think that the highway and parking infrastructure is more than up for the task. Yeah.

Anyway, there's a major rail outage, and that means it's time to play the "what if these people actually gave a shit about the riders?" game! Back in 2007, the bridge over the Thames River between Groton and New London was being replaced, and in 2009 it was the Niantic Bridge being replaced. In both cases Amtrak completely suspended service for an entire weekend, and in both cases I pointed out parallel train lines that could be used to bring people between New York and Boston, in particular the Inland Route (currently a slow, non-electrified line with low platforms) and the Air Line (currently railbanked as a trail). 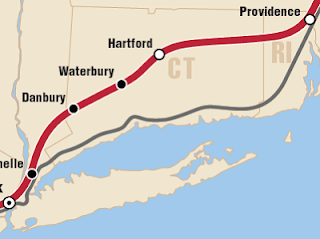 Amtrak's Vision for this part of the Northeast Corridor.
Amtrak and the states of Massachusetts and Connecticut are now working to upgrade the Inland Route, in part due to a large influx of stimulus money, and Amtrak's Vision (PDF) for the Northeast Corridor includes a parallel route through the middle of Connecticut. Unfortunately, that part of the Vision is expected to cost $58 billion (with a "b") and not go live until 2040. 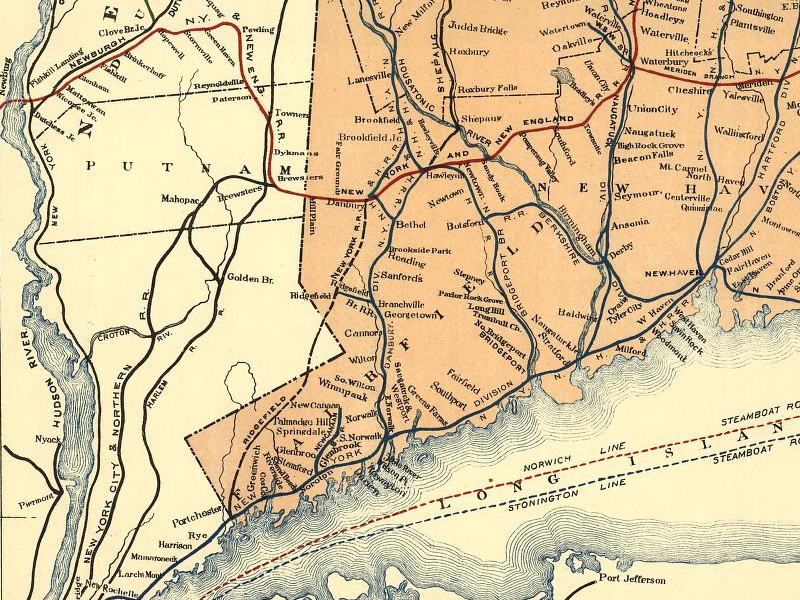 The railroads of Connecticut in 1893.
In the meantime we can work on the existing track. It would cost a lot less than $58 billion to rebuild the New Haven and Derby Railroad, abandoned in 1932, and to upgrade the track on the Berkshire Railroad and the New York and New England, electrify them and install high level platforms at stations. This would ensure that Northeast Corridor and Metro-North trains can go from New Haven to Stamford and get back on the main line, or to Brewster and get on the Harlem Line without having to pass through Bridgeport. (For that last you would also have to convert the Harlem Line to catenary power.)

For a lot less money, you could simply have diesel locomotives pull Amtrak cars through the Inland Route and along the unelectrified track from Meriden through Waterbury and Danbury to Stamford and maybe White Plains, with temporary platforms at a few stations. You could run extra shuttle service from Bridgeport and New Haven to meet the train in Meriden and Waterbury, and in Stamford and White Plains people could transfer to electric trains to Manhattan. It would be slower and less frequent than normal service, but it would be a lot better than nothing.

With the way that Amtrak and Metro-North are currently handling this, it looks like there are a lot of Connecticut commuters who will have a long, slow commute on Monday. I hope you'll all take the time to write to Governor Molloy and to Jim Cameron urging them to put an alternate route in place.
Posted by Cap'n Transit at 2:13 AM

The question I keep bringing up is, why? Those lines aren't useful except as relief lines for through-traffic. No offense to Waterbury, but it's not that important of an intermediate city, even by Stamford/New Haven/Providence standards. So for a given amount of money, do you reactivate parallel lines, or keep the tracks adequately maintained?

Bear in mind, you can't even always use parallel lines. Amtrak recently derailed in the East River Tunnels, I believe two years ago. Building redundancy there is definitely more expensive than improving maintenance practices to the level that's ensured no such derailments happen on the Shinkansen.

Alon's pretty much nailed the problem with this approach; it doesn't scale. You can't buy enough redundancy to completely eliminate the possibility of a service-destroying bottleneck. Gold-plate the Inland Route, and you're vulnerable at Bridgeport. Bypass to the Danbury Branch, and Greenwich can still fuck up your week. Make it to the Harlem Line, and one train picking the wrong switch at Woodlawn Junction or Mott Haven is still going to create the rush hour from hell. At that order of magnitude spending, why not just build the New York and Boston legs of the Empire Cross*? That at least gets you away from the NEC between Manhattan and Back Bay, while actually connecting to desirable destinations elsewhere.

What I would say is that, until we reach the fanatical levels of safety culture and investment found on Alon's beloved Shinkansen, we should accept that things are occasionally going to break, and have the capacity available to bus bridge when they do. Of course, the state of Connecticut does not believe in having adequate bus service to begin with (which is why the New Britain Busway is such a punchline), so they can't even think about bridging the SoNorwalk-Bridgeport gap. Amtrak can't bring enough of its bus-based competitors to the table to bridge NHV-NYP; it would have to offer them something in return, and it has neither the money nor the capacity for cross-honoring displaced bus passengers to do so.

This particular accident is also something of a Black Swan event; it had the misfortune to occur at a location where two of the four available tracks are o/o/s for an extensive maintenance project. If even one of those tracks were available, that would provide quite a lot of flexibility for a bare bones schedule. It would still suck, but it would suck much less than what we have. Events that can take out all four tracks of a railroad are *extremely* rare; they do happen, but not nearly as often as events that take out just two. And the parts of the NEC that only have two tracks are, generally speaking, less heavily trafficked and more easily bypassed than the fully four-tracked segments.


*200+ mph, mostly-greenfield HSR with an Albany hub and spokes to NYC, Boston, Montreal, and Buffalo. Not bad as fantasies go.

If the state put a figurative gun to the Housatonic Railroad's head (or came up with the money to do it themselves) they could fix up the Maybrook between Danbury and Derby and route something that way - it would be long, and I don't know how Amtrak could finagle it qualifications-wise, but it would help. I know CT has a diesel shortage, but I would think sparing an SLE set or 3 (I keep hearing that they have a surplus of equipment for when NHHS opens) and running NHV-BPT (bus people to/from intermediates to SoNo) with thru service via Maybrook to Danbury, then down the branch to SoNo would be a nice option to have.

Too bad the split of the Maybrook from the Waterbury branch looks like a train would derail if you looked at it cross eyed. I really hope CT either forces HRRC to do something or obtains ownership of the trackage to facilitate restoration to at least minimal passenger service condition.

I dont think new ail lines are the solution. But they should mobilize every bus available. School buses last used in 1984? Put them on the road.

New jersey pulled this same crap with Sandy. No car? Enjoy your week off, hope you dont get fired.

The Airline was going to solve the problem of getting across Connecticut that everyone said was unsolvable. Taking the LIRR to a ferry terminal on the North Fork would have to do. It's twisty, curvy, hilly and was never more than single tracked. Mostly because the what we now think of as the NEC was opened and it was faster because it was straighter - with all it's curves - and flatter. The map in the post is schematic. Look at the hiking/biking trail it's become. It's good for a hike. Not for running trains on when even a slow bus would be faster.

Cap'n Transit is right about this: one of the inland routes should exist for redundancy. For that matter, the bridge at Newburgh needs to come back into service, for redundancy....

Remember, this problem took place on a rail line which already has four tracks. Two were out of service for catenary and bridge replacement. They just happened to get a derailment on one of the other two *and* get another train crashing into that.

The only way to deal with that IS to have a backup route.

But there should be a backup route anyway. The entire coastal area is flood-prone. The next route north which is functional right now is the Boston & Albany route -- that is *too far north*. There needs to be a New England - West of Hudson route which is south of there, but above flood level. It's a national-level problem.

Metro North wasn't running during the never to be repeated Northeast Blackout of 1966. Or the ones that repeated. They haven't gone out and put diesel locomotive in storage for the next one.

Can't depend on the Connecticut Turnpike either.

It's not the only time I-95 has been closed in the Tristate area. ( though technically it's quad state, two counties in Pennsylvania are now officially part of the metro region, Pike and Monroe. )

Propane tanker decided to spring a leak on the George Washington Bridge mid afternoon. They closed the bridge. People decided to use the redundant crossing. Which gridlocked. Some of them decided to go to Brooklyn and use the Verrazano Narrows to get to Staten Island to get to the Goethal's and the Outerbridge. Which gridlocked like the Verrazano. Some of them decided to skip the TZ too and went to the Bear Mountain Bridge. I don't remember what happened at the Bear Mountain Bridge.

And there was the way the highways closed down on Sept. 11th 2001. New Jersey Turnpike all the way down to New Brunswick.....