Staten Island and our goals

This summer I went to Staten Island for the first time in several years. There are some things I like about it, but I don't go there very often because it's hard to get there and I don't feel welcome when I do. I feel similarly about North Carolina, but it's harder to ignore Staten Island. With mayoral candidate Joe Lhota floating the idea of moving the Transportation Department headquarters there, the need to say something about the place is even more urgent. Ben Kabak said his piece this morning, and it got me thinking. 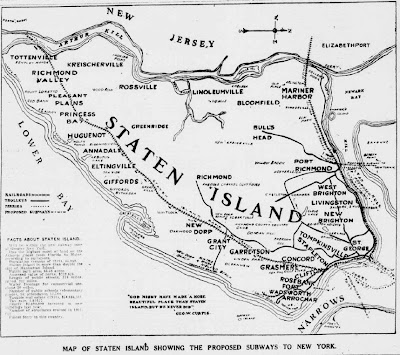 …and the trolleys. Map: New York Tribune, July 1912, via Bowery Boys.
I know there are lots of nice people who live on Staten Island, including some regular readers of this blog. There are many who want it to be a place where you can walk, bike and take transit, and some who are even working to make that happen. I'm glad you're out there and I salute you for your work. But your borough is a problem.

Even more than other suburbs, Staten Island affects those of us who live in the rest of the city. Its residents spend a lot of time driving through Brooklyn, Manhattan and even Queens. They constantly feel slighted by Manhattan politicians and demand that the city and state spend money there. They also demand lots of subsidized services, like low tolls on the Verrazano Bridge.

Most dangerously, as a large bloc of middle-class white voters, the South and West Shores of the island wield disproportionate influence, and use that to get some of their demands. They are an indispensable part of any center or right-wing political campaign, proving particularly valuable to Rudy Giuliani and Christine Quinn. Politicians frequently pander to the agenda of the island's car owners, and the island's representatives on the City Council and state legislature frequently work with representatives from the eastern Bronx, Brooklyn and Queens to oppose progressive transportation efforts.

For some perspective, let's imagine that in the twenties, instead of building the Bayonne and Goethals bridges and the Outerbridge Crossing, the Port Authority had put in double-track high-level railroad connections, upgrading the Arthur Kill lift bridge and building a northbound connection to Bayonne and connecting to the Lehigh Valley line at Perth Amboy. Imagine if in the sixties, instead of the Triborough Bridge and Tunnel Authority building the Verrazano Bridge, the Board of Transportation had dug tunnels? Not a parochial local tunnel to Bay Ridge, but a connection between the Long Island Railroad and the national network, plus a high-speed tunnel under the harbor directly to Lower Manhattan? Imagine if they had extended the trolley network (see the map above) to cover the whole island?

You'd have a place that was easy to get to by train, but difficult by car. Instead we got the opposite: the most car-dominated of the five boroughs.

That time is past. The question is, what would help us fulfill our goals (see the top of the page)? What should we do about Staten Island?
Posted by Cap'n Transit at 12:49 AM

You can't make it walkable overnight, but developing a pocket of high-density walkability would dilute its autocentric voting power. Or you could trade it to NJ for Bergen Neck.

Not that I spend much more time on Staten Island than in North Carolina either, but given the date on that map, there is probably enough traditionally laid out development on the north end of the island, between Port Richmond and the Verrazano, to be worth intensifying into a high-population, high-density counterweight to the sprawl on the South Shore. You obviously can't build a direct rail link to Manhattan yet, but an HBLRT link provides a good trunk for the North Shore as well as a link to nightlife in Hoboken. That, plus some bus upgrades and CitiBike expansion (you know some whiny SI politician will demand it soon, if they haven't already), and the area should be no worse off in terms of your goals (OK, our goals) than dense rail suburbs like New Rochelle or East Orange.

There is an abandoned tunnel segment from the first attempt reach Staten Island by rail which was built during the 1920's which has not been inspected since the 1950's.

Perhaps a good first step would be to get a condition report on that tunnel.

Right now, the SI Ferry gets about 65,000 riders per day, with its crappy headways. That's roughly the same amount as the Clark Street Tunnel in Brooklyn: http://www.nyctransitforums.com/forums/topic/36566-why-are-their-no-mta-buses-or-trains-that-travel-across-the-brooklyn-bridge/page-4#entry572924

Factor in the better headways and quicker service attracting tons more riders, and add new development on top of it, and it's a no-brainer.

Part of Staten Island's problem is its reactionary residents but another part, which no one talks about, is geography. Staten Island is a victim of political boundaries that are unhelpful all around: it's surrounded on three sides by New Jersey and its only land connection with New York is far away, such that the Verrazzano is one of the longest suspension bridges in the world. Most of its buses, as well as its train, are oriented toward the ferry to Manhattan and a disproportionate amount of money is spent on express buses to Manhattan as well. The local buses to Brooklyn are on circuitous, slow routes but are nonetheless actually very popular.

To me, the simplest, cheapest solution is Brooklyn-New Jersey limited stop buses. For example, Newark-Brownsville or whatever with a few limited stops in Staten Island. Or Perth Amboy-Atlantic Avenue. The S89 bus, limited though it is, at least established the principle that MTA buses could travel to New Jersey stops, and while I'm not going to pretend it's a smashing success, it's hardly unused either.

Something like that; integrate Staten Island into the region instead of making it a transit cul-de-sac and berating its (admittedly often very stupid and whiny) residents for driving everywhere. I mean, if you're trying to get to Jamaica, say, the bus-ferry-Lexington-F train is actually relatively fast; but getting anywhere besides Bay Ridge in Brooklyn is ridiculously slow and aggravating sans car.