Earlier this month I talked about how car dependence is overdetermined, with at least seven more or less independent factors influencing it: identification, leadership, NIMBYism, corruption, the "Two New Yorks" lie, the power of drivers and rural bias. I wrote that any good campaign to reduce driving has to tackle at least two of them, and the more the better. Or we can work together to make sure that all the bases are covered. Here are some people working on these factors: 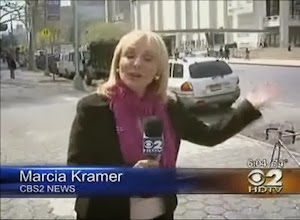 As you can see, Streetsblog, Transportation Alternatives, Reinvent Albany and StreetsPAC are probably the strongest organizations in these areas, and they definitely deserve your support. But their efforts are a bit light in many of these factors, especially leadership, "two New Yorks" and rural bias.

Can we afford to ignore these three factors? Is there an organization or blog that I'm missing? Do you know of a city or region that has successfully overcome challenges like these?

Regardless of what everyone else is doing, I hope that you will take the time to think about all seven of these issues, and then blog, tweet, Instagram or otherwise generate content about each of them.
Posted by Cap'n Transit at 11:47 PM

First one reminds me of my family. All drivers, whenever they're in the city they rush across the crosswalks "so drivers don't have to wait long for me to cross."

I just walk at my normal everyday pace. They can wait, I'm not rushing myself.

People who don't drive someday want to drive, so they sympathize with the drivers, who they someday see themselves being associated with. Or, they don't believe their own position as a pedestrian/transit rider is "marginalized," and the car is and always has been king.

Thanks for asking, Charles! I've written more about the poisonous "two New Yorks" narrative in the past. In brief, the "poor" New York always winds up being run by drivers. The only way to avoid that is by slicing the city into "two New Yorks" of drivers and non-drivers,

It seems like the idea of two New Yorks ought to highlight transit. It's the elite New York that is heavily car-oriented, even in some cases limousine-oriented. But the mass of New Yorkers across the city is critically dependent on the subway and bus system. The neglected New York takes transit.