Leading pedestrian intervals and the left hook of death

On the morning of December 20, Mauricio Osorio-Palominos drove his truck south on 61st Street here in Queens and turned left onto Northern Boulevard. Eight-year-old Noshat Nahian was crossing the boulevard with his older sister and a number of other children bound for P.S. 152. The law says that as the driver of a turning vehicle, Osorio-Palominos did not have the right of way, and should have waited until all the pedestrians were clear of the crosswalk before attempting to turn. Instead, he turned in front of them, and crushed Nahian under his rear wheels.

Last week I talked about the "safety culture," or lack thereof, on Northern Boulevard, which is one of the factors in the death of this boy. The culture that puts adults before children, work before school, drivers before pedestrians and trucks before all is what gave Osorio-Palominos the license to get behind the wheel even though the state of New York had forbidden him to drive a truck, and the state of New Jersey had punished him numerous times for dangerous conduct. It is what pushed him to drive his truck in front of the children, even though the law obligated him to wait for them. But that is only one factor. 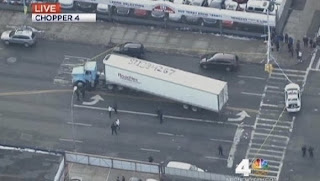 Image: WNBC News.
Another factor is the left hook of death. When I heard about the death of this boy, only slightly younger than my own son, it brought to mind another death. In 1997, Jill Solomon was killed under the rear wheels of a truck turning left from Second Avenue in Manhattan onto the Queensboro Bridge. As activists gathered to mourn her death, they saw a car crushed in the exact same way at the exact same spot, fortunately with no deaths that time.

I remembered hearing about Solomon's death from Transportation Alternatives shortly after it happened, and recently when I went to research it, I found other stories. Another, unidentified cyclist was killed a week before her on Broadway at 86th Street. T.A. has been calling attention to these crashes at least since the deaths of 80-year-old Eugenia Renom and her daughter, 55-year-old Angelica Chorberg, in 1995, at Seventh Avenue and Central Park South. More recently, Streetsblog reported on the death of 58-year-old Jessica Dworkin at the corner of Sixth and Houston in August 2012.

Noshat Nahian is not the first young person to be killed this way. In 2003, eleven-year-old Victor Flores and ten-year-old Juan Estrada were killed at the corner of Ninth Street and Third Avenue in Brooklyn. And just this past July 31, sixteen-year-old Renee Thompson was killed at Third Avenue and Sixtieth Street in Manhattan.

In their reports and press releases, Transportation Alternatives and Streetsblog recommend a number of worthy measures, like sidewalk extensions and enforcement of laws restricting the movement of long trucks and requiring the installation of crossover mirrors. I want to focus on one change advocated by T.A. and Streetsblog that could have made a difference at the corner of 61st and Northern, and that could prevent future deaths and injuries: leading pedestrian intervals.

A leading pedestrian interval is a way of configuring a traffic light to give the "white man" to pedestrians for a few seconds before giving the green light to drivers. This allows pedestrians to occupy the crosswalk before a driver has a chance to turn. The DOT has installed several on Queens Boulevard, and the intersections feel much safer with them. If there had been a leading pedestrian interval at 61st and Northern, Osorio-Palominos might have waited before turning in front of the children going to school.

The DOT is rolling out leading pedestrian intervals at dangerous intersections across the city. Unfortunately, the pace is slow, and none of the intersections I've mentioned in this post currently have them. This may be because LPIs require more sophisticated control devices, and those cost money. When Ben Fried reported in 2008, the DOT required time-consuming studies to determine whether an LPI is "warranted" at an intersection; it's not clear if that's changed since then.

We have ample proof that leading pedestrian intervals save lives. We need to streamline the process to install them. Our new Transportation Commissioner, Polly Trottenberg, talked with street safety advocates at the inauguration ceremony for her boss, Mayor De Blasio. One of the best ways she can build on the work of her predecessor, Janette Sadik-Khan, is to speed up the rollout of leading pedestrian intervals citywide. If it is a question of money, we need to find that money. I think our children's lives are worth it.
Posted by Cap'n Transit at 1:00 AM

This post made me think of the subconscious way I cross a street. I tend to treat the time interval between the opposite direction turning red and my direction turning green as a leading interval--that is, I begin to cross when cross traffic stops, not when I get the white man.

While this is anathema to our cultural belief that we can regulate our way to safety, I suggest that we could teach that pedestrian crossing time begins not when we get the white guy but rather when cross traffic is held. This as a mass realization would create the effect of a leading time interval* in the interval (heh) we have to wait for to see actual LTI stoplight actuators installed.
__________
* In the U.S.

The leading pedestrian interval itself is a good thing, and we are seeing a lot of them in Pittsburgh, PA.

Unfortunately, in a lot of cases, the new signals that enable this are accompanied by other changes which are horrible for pedestrians. The amount of time where crossing the street is permitted has been severely curtailed in many cases. At one intersection I use daily, the green light in one direction can stay on for up to 105 seconds, with solid "don't walk" illuminated in the same direction for 80 seconds! Also, pedestrian crossing buttons are often installed, but usually (maybe always) the only effect they have is to skip the "walk" cycle entirely if not pressed. So, arrive at the intersection 1 second too late and you have to wait maybe 2 minutes before you can legally cross. It's a joke - no wonder most people choose to jaywalk instead.

If that is what counts as "pedestrian improvements" (as they're often described), I say "no thanks"!