As I wrote last month, there were multiple factors that all contributed to the death of eight-year old Noshat Nahian under the wheels of Mauricio Osorio-Palominos's truck on December 20. Commercial driving culture in general, and in Queens in particular, makes the lives of children a lower priority than the profits of the companies and the convenience of the drivers. The priority of pedestrians in crosswalks is routinely ignored. The excessive amount of street space allocated to driving encourages drivers to speed and take turns too fast. 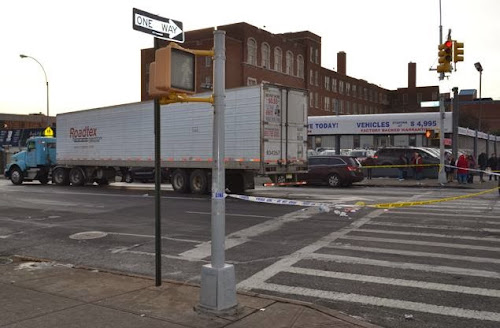 Photo: Jon Kablack / BMR Breaking News
Another factor is the very size of the trucks. The left and right hook deaths I cited before all involved large trucks. I had a hard time avoiding cars in a 35-foot rented moving van, and the number of deaths show that even professionals have difficulty avoiding pedestrians, especially in larger trucks.

The City recognizes this, with laws restricting trucks to designated routes, unless they have local business, and forbidding some trucks from entering the city at all. But the size of trucks making local deliveries has increased over the years. The supermarket in my neighborhood has a loading dock that is gated and locked, because it's never used. The trucks that deliver to that market today would not fit even if they blocked the entire street. Instead they line up on the avenue, and the store employees break the pallets on the sidewalk and handtruck everything in through the front door.

If you go out west things are worse, with gigantic double trailers barreling down the highway, and the trucking companies are lobbying for even bigger trucks to be allowed. We already restrict the size of trucks on our city streets, which means that there are warehouses to take things off of big trucks outside the city limits.

We should go further. We can't keep our kids safe with even 55-foot machines on the road. We need to envision a city without big trucks. I wouldn't be surprised if it drives up the cost of things we buy, and the cost of doing business in the city, but I know my son's life is worth it, and I hope you agree.
Posted by Cap'n Transit at 10:49 PM

Its amazing how many of these stores have loading docks. Im guessing those are a zoning requirement, or else are constructed by chain stores (including local chains like C-Town and Food Bazaar) as a matter of course not thinking about how these things really work.

I support loading zones for trucks to offload on the street, with the reservation that these must go hand in hand with traffic calming in many places, as the double-parked delivery trucks are serving as traffic calming today, albeit sometimes also dangerously blocking views of intersections/crosswalks.

I actually dont think the costs would be that significant for using smaller trucks for the last miles in NYC, as long as larger trucks (or even better, trains) are being used for the longer haul. Same thing with the unloading, which isnt that different. The people doing all this are paid very little compared to the amount of stuff theyre moving, one way or another.

The big grocery stores here use huge trucks and the Asian markets use small ones, but guess which stores have the cheaper groceries? I think the wholesale price and the whole supply chain have a much larger effect.

There is a name for multiple cargo carrying vehicles connected to one source of motive power. Trains.

There's a Domino's Pizza near my apartment on 5th Ave in Park Slope that happens to be directly in front of a B63 bus stop. At least once a week a full sized Domino's semi pulls into that bus stop, completely blocking it, for about 2 hours with its flashers on so the driver can unload. It enrages me every time. The fact that Domino's is sending a full-length semi into urban neighborhoods and then illegally using public space for private business is infuriating. Of course, I've never once seen the cops ticket the truck. Par for the course in this town.