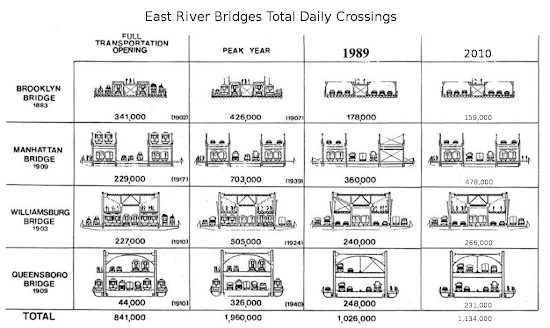 Passenger capacity estimates on the East River Bridges. US DOT, updated by threestationsquare.
Of the subways that cross the East River and the PATH trains that cross the Hudson, almost all the bridges and tunnels are packed with trains at rush hour, and those trains packed with passengers. The one exception is the Williamsburg Bridge, which is constrained by technical challenges, by the depopulation of South Side Williamsburg, Bushwick and East New York, by zoning restrictions on building, and by the fact that the J and Z trains only go to lower Manhattan. Since the MTA rerouted the M train to Midtown, ridership has gone up, and so have rents in Ridgewood, but that is the only line that is not at full capacity.

The only new subway crossing that has been given serious consideration recently, the Subway to Secaucus, has been stuck on a shelf somewhere.

MTA Capital Construction has installed an improved signalling system (CBTC) on the L line, which has allowed them to run more trains through the Fourteenth Street Tunnel. This capacity has been rapidly filled by an increase in ridership. They are rolling out CBTC to other lines, as the Port Authority is doing with the PATH trains, but funding limitations have stretched the rollout over years. As with the L train, the increased capacity is not expected to be enough to handle an additional branch on any line, only to allow neighborhoods near the existing branches to add population and to give some breathing room to passengers.

With commuter rail, the constraints are the platforms at Penn Station and the Park Avenue Tunnel. Alon Levy pointed out years ago that the constraints at Penn Station are not technical, but due to the three government-run commuter rail agencies' insistence on terminating all trains there, and our politicians' inability to force them to implement through-running arrangements.

For years the MTA has been pouring billions of dollars into East Side Access, but that will not be finished until 2023 at the earliest. The ARC Tunnel from New Jersey and its successor, the Gateway Tunnel, are being blocked by Governor Christie, who has used ARC funding to pay for road expansions.

Bus capacity into Manhattan is similarly constrained. Buses crossing from New Jersey through the Lincoln Tunnel can terminate at the Port Authority Bus Terminal, but that is also full. Proposals to build garages with public funds have faltered, and no private company seems interested in building a garage or terminal. The Port Authority is renovating the George Washington Bridge terminal, but that is too far north, and connects to a downtown A train that is also very crowded.

Any buses that can't fit into the Port Authority use city streets to pick up and drop off, as do buses from the other crossings. A backlash from NIMBYs, mostly drivers and business owners but aided by misguided pedestrian advocates, has put a lid on any expansion of curbside bus access.

As with commuter trains, there is a potential for through-running with buses along 34th or 42nd streets or Church Street that could relieve some of these constraints, but the bus operators have shown little interest, and political leaders have been too busy pandering to the backlash.

One reason bus operators may be uninterested in through-running or building terminals or garages is that there are also capacity constraints for buses on the bridges and tunnels. Anyone who's tried to take the Q32 into Manhattan in the morning knows what happens to bus travel times when a bridge is free for any vehicle. Passengers on the inbound QM5 express bus know that things run a little smoother when there is a toll and a bus lane, and people who have ridden the Red and Tan number 20 know that congestion pricing makes it even better. But even those passengers say that the bus lanes are too short, and those crossings with lanes and tolls are at capacity as well.

So that's the dismal state of getting commuters to Manhattan. What should we do about it? I'll talk about that in future posts.
Posted by Cap'n Transit at 11:10 PM

Would through-running really alleviate the platform and stair congestion at Penn Station? I'm picturing a morning train from Jamaica to Trenton. You'd have many people boarding and disembarking. Could the stairs handle everyone at once, or would you have to let everyone off before letting anyone on, Amtrak-style?

Not sure how it would work with the current configuration, but they could reduce the number of tracks and widen the platforms to solve that in the medium to long term.

They could also perhaps reconfigure the tracks and platforms to have a track share two platforms, with passengers exiting onto one and boarding from the other.

Not to be a foamite sticker, but the cross section of the Queensborough Bridge at opening is incorrect. The upper level had the two elevated tracks in the middle with pedestrian walkways, of generous width, similar to the Williamsburg Bridge, on either side.

Certainly through routing would do much to alleviate train/track congestion at Penn Sta. But as C.P. Morris points out above, the turn over of passengers going up and down the stairs from the platforms could present a very real problem. Widening the platforms and eliminating tracks, as BBnet3000 suggests, would certainly not be the solution.

Cap'n, did you look at the image you included? The infrastructure on the Manhattan Bridge is the same as in its peak year, 1939, and is more useful today because of the Chrystie Street Connection (whereas in 1939 two of the four tracks were used only for peak-hour services to Nassau St/downtown). Yet, in 1939 the bridge carried 703,000 people a day, while in 2010 it carried only 478,000. This table shows that as of 2007 the B, D, N and Q trains all ran less often than their infrastructure permitted with the trains themselves also well below maximum load. Clearly there is plenty of spare capacity on that bridge if demand required it.

It's certainly true that some of the crossings are at or near maximum capacity such that new projects designed specifically to relieve them are worth considering. But I'm sick of the supposed total lack of capacity on any crossing being used as an excuse for why we can't have congestion pricing and expect drivers to switch to trains. And on the other hand I'm sick of it being used to justify bad projects that would not serve where the demand is (e.g. 7 train to the swamp) or would add negligibly to capacity (e.g. street-running "BRT" that still has to stop for every crosswalk and jaywalker) or both (most ferry proposals).

Your discussion of Penn Station through-running is on the right track, one of several cases where the main barriers to increased capacity are organisational. The lowing of speed limits on most lines since the 90s is another example. The total number of people entering Manhattan-below-60th by subway/PATH was 2389k in 1948 (with almost all the els gone) and 2166k in 2012, in spite of improvements like the 1950s platform lengthenings, Chrystie St, 63rd St and CBTC. The fact that much of our existing infrastructure carried significantly more people in the past is pretty clear evidence that it shouldn't cost billions to do better today.

@capt subway: Hmm. That part of the diagram is from the original USDOT pdf, and these photos look more like what's shown in the diagram. On the other hand this photo from 1910 has the two large walkways but no elevated tracks at all, presumably a temporary arrangement. I think the problem is rather that the "full transportation opening" wasn't until the elevated tracks opened in 1917. So really that should be the year listed in the diagram, and the ridership number probably correspondingly higher, but without data from 1917 I can't really correct it. The peak numbers are the more interesting ones anyway.

Incidentally, the 2012 Hub Bound Travel study is now available (and the source of most of the numbers above). The 2012 numbers for the bridges are:
Queensboro Bridge: 238k
Williamsburg Bridge: 274k
Manhattan Bridge: 509k
Brooklyn Bridge: 129k
I may update the diagram soon.

Thanks for the link to the Hub-bound Travel Study, Threestationsquare! Lots of good stuff in there, including Table 20 in Appendix II...

The issue with penn is that the entire train disembarks at once. A suburban rail trunk line is needed from esa to Atlantic avenue, with stops along the way to disperse the boardings and disembarkations.

Admittedly PATH is currently limited to 8-car trains vs the 10-car trains on Joralemon St, but this indicates significant spare capacity even accounting for that.

The 2 runs every 20 minutes in the dead of night. PATH runs every 35-40 and only to Newark. When they haven't suspended overnight service to the WTC.

I've updated the image with 2012 figures, as well as a more correct 1910 depiction of the Queensboro bridge (as suggested by capt subway) to match the 1910 number.

With the potential logjam of LIRR trying to use GCT and Metro-North trying to use Penn Station, did it ever behoove any of the geniuses at the Port Authority to examine the costs of those two projects vs the cost of building new tunnels between Hoboken and Atlantic Terminal with commuter trains serving Fulton Street Station?