Light rail, streetcars and our goals

There's a lot to be said about light rail and streetcars; in this post I want to focus on how these two kinds of trolleys fit in with our goals (as articulated above), and particularly how they can get people out of their cars. If you're trying to decide which kind of train to push for, there are three major questions: (a) Can the train mix with cars and trucks? (b) Can the train mix with freight trains? (c) How long can the train be?

In contemporary usage, streetcars run for most of their length in mixed traffic. We don't have a good example here, but if you go to Girard Avenue in Philadelphia you can ride one. Light rail trains run for most of their length in their own right-of-way, but may cross many (or all) streets at grade. Good examples include the Hudson-Bergen Light Rail and Newark City Subway in New Jersey. 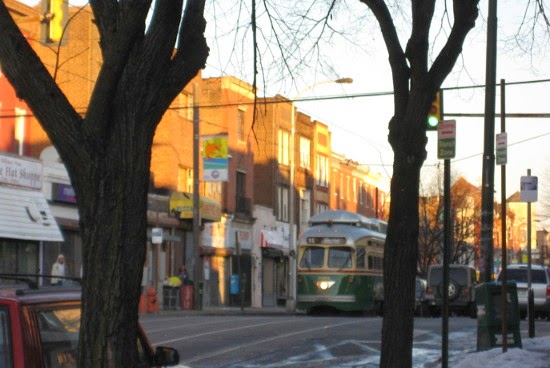 The Girard Avenue Trolley in mixed traffic. Photo: rperlin83 / Flickr.
There are important differences between light rail, streetcars and other forms of rail. Elevated rail is raised above the street like the #7 train for most of its length, and subways go below the streets like the R train. Commuter rail can run elevated or in a cut like the LIRR Port Washington Line in Queens, but sometimes crosses streets and roads at grade like the LIRR Hempstead Branch in Garden City.

Commuter trains in the New York area typically share tracks with freight trains, which means that the Federal Railroad Administration requires them to be unnecessarily big and heavy. PATH trains run in subway tunnels in Manhattan, Jersey City and Hoboken, but they have a waiver from the FRA to run on shared track between Journal Square and Newark. Light rail and streetcar trains are typically not allowed on shared tracks, but the River Line between Trenton and Camden splits the time with the Chesapeake freight railroad: they run passenger service during days and evenings, and CSX runs freight overnight.

Because they mix with cars so much, streetcar trains are typically only one or two cars. Light rail trains sometimes have up to five or six cars. Subways and commuter trains can have ten or twelve cars. 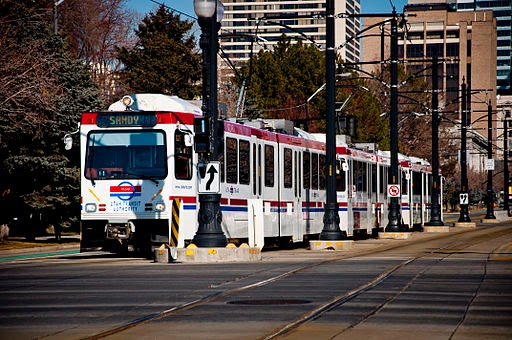 Some light rail lines, like Salt Lake City's TRAX, run pretty long trains. Photo: vxla / Wikipedia.
Streetcars are often considered to be cheaper than light rail, and light rail to be cheaper than subways or commuter rail, but this is not magic. The cost comes primarily from grade separation and longer, heavier trains. This has important implications for transit, particularly in the New York area.

The second is that building the wrong system can limit your speed. All other things being equal, a streetcar in mixed traffic is going to be slower than a light-rail or commuter train in a dedicated right-of-way with grade crossings, and a train with at-grade crossings is slower than one without them.

Both of these speed and capacity limitations have the effect of limiting how many passengers the line can carry, which can in turn limit revenue. They also decrease the value to passengers, which can drive them away. You may be able to pack those cars, but you'll have to keep the fare low to do it.

In a future post I'll discuss these factors in terms of specific projects here in the New York area.
Posted by Cap'n Transit at 11:25 PM

There's also streetcars that are not mixed in traffic, which is to say that they have their own dedicated lane. Often more important than the speed advantage is the better transit time reliability, since streetcars typically gain capacity by increasing frequency, but this is most effective in reducing effective waiting time if the streetcars are relatively evenly spaced rather than bunched.

Streetcars with their own lanes are uncommon with new systems because car-centric level of service models will punish those streetcars more heavily for slowing down cars on the road than they will mixed streetcars.

Yes, Bruce, but what I'm saying is that if you've got that much dedicated ROW, you might as well run light rail trains so you can take advantage of higher capacity if you need it.

Streetcars are better adapted to running in corridors along well designed street grids than longer LRT vehicles (light rail transit), but they are rather complementary to LRT than rivals. It makes sense to develop a dedicated corridor LRT between two main job centers, but that LRT corridor will be more effective if it is crossed by a network of streetcar lines as it passed through each of those job centers.

After all, while we in the US tend to build a flagship streetcar system or two, our original streetcar systems were more normally a mesh of routes, like the contrast between the Sydney "light rail" streetcar line and the Melbourne tram network. Crowds after an event at a location served by a network of streetcars melt away in a way people from car-addicted areas find surprising.

One lurking opportunity with a mixed-traffic streetcar system is the ability to designate streetcar lanes as exclusive streetcar or exclusive transit lanes at some later date, if the political clout of the road building empire were to take some hits at some future point.

I was on Girard Avenue, which seemed to have its own lane in portions. But then it had to share the roadway with left turning lanes, which also seemed to have longer waits between green lights.

In other words, it would be relatively easy to speed the Girard Streetcar. Give it priority on the lights. And get rid of the stacking turn lanes in its way.

One would think the grade separation of New York's subways would allow high speeds as you suggest, but in fact the average scheduled speed of subway trains is just 17.4 mph, with some lines like the G train averaging as little as 13.5 mph. While faster than the competing bus routes in New York, this is slower than bus and other surface transit in many other parts of the country.

I'm told the subway used to be faster in at least some places; the decrease in speeds seems to be a consequence of some combination of deferred maintenance and a myopic focus on "safety" (while ignoring the carnage on the roads). Increasing speeds would both improve the lives of riders and lower operating costs for the MTA (as fewer drivers and trains would be needed to provide the same service). Yet this seems to be completely off everyone's radar, and indeed the current CBTC upgrades will if anything lower average speeds.

Sorry this is a bit offtopic but would like to hear your thoughts.

The distinction between streetcar, LRT and subways (more precisely, heavy rail transit*) can sometimes be hard to tell indeed.

From what I've seen, I'd say that light rail and heavy rail are two different types of vehicles. Light rail vehicles are made to be able to accelerate and brake faster and to take tighter bends, allowing them to maneuver intersections built for cars in a way the heavy rail vehicles can't, and to be able to mingle with cars if need be. This ability to maneuver intersections can allow LRT lines to be built cheaper than heavy rail which necessitates curbs with greater radii, hard to build in urban areas.

What complicates matters further is that some LRT vehicles can travel on heavy rail lines (the tram trains), but heavy rail typically can't navigate LRT tracks.

A streetcar is essentially an LRT without a reserved right-of-way, running mostly in mixed traffic. In fact, in French both are called "tramways", and the recent tramways built in France frequently run more like LRT in certain places, and more like streetcars in other places (mostly around pedestrians though).

The real curveball is LRT lines like the Calgary C-Train, which might be better called a "light metro" system.

*subways tend to imply undergound, but not all HRT runs underground. I prefer the French name "metro", as in "metropolitan train". Which is more accurate.

@simval84 ~ yes, the original definition of heavy rail and light rail from when light rail was first proposed in the 70's/80s was about designed passenger capacity, but under the US regulatory system, split between the FRA for trains that can run on the regular freight rail network and the FTA for trains that are freestanding, the distinction has been become more about vehicles with lighter axle loadings and tracks designed to only work with those lighter vehicles for light rail, so shifting from "light capacity" to "lighter weight".

They both are forms of light rail, but LRT is focused on vehicles running exclusively on dedicated guideways normally with higher capacity per vehicle, and streetcars are vehicles that can be operated on street lanes with installed street track, whether those lanes are exclusive or shared with cars, and in that setting have an effective limit on their length, so add capacity by adding frequency, whereas if the platforms will support it, LRT can add capacity by extending the length of the train.

Heavy Rail includes subways, ELs, intercity trains, and what is normally called "commuter trains" in the US, typically with more capacity than light rail, though some of the longer light rail trains and some of the shorter commuter rail trains overlap in capacity. The most common reason why the smaller capacity "commuter rail" is used instead of light rail is to make use of an existing freight corridor.