It turns out that there's another hitch in estimating how crowded the subways are: in my last post I used the NYMTC's estimates of space per passenger from Table 20, but in the comments threestationsquare pointed out that they assume that every subway car has 602 square feet of space, which is definitely not true. Andrew suggested using the MTA's rush hour loading guidelines, which can be found on pages 26-31 of this PDF, and threestationsquare went with that. He also used the crowding in the 8AM hour, which makes sense since that's the peak hour for every line. 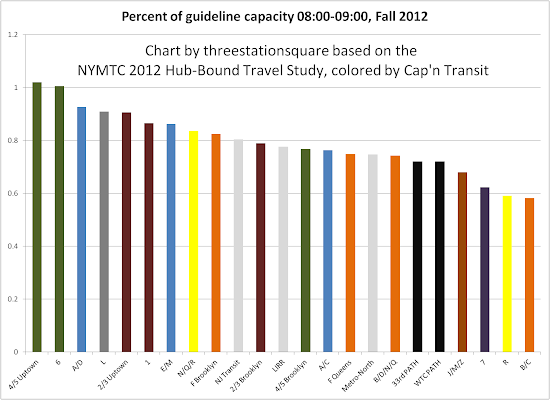 I'm on record as to the problems with loading guidelines. Capt Subway, who was a scheduler at the MTA for many years, added to my critique with his experiences, which are definitely worth a read. But the problems that the Capt noted are with the way the MTA measures compliance with the guidelines, and these are independent measures by the NYMTC. As Andrew noted, the rush hour guidelines are nowhere near as political as the off-peak guidelines, so I'm comfortable with that.

In every measure, however, the #7 train and the R have always been at the low end. This means that the capacity added in Long Island City has been a good thing, although as others have mentioned, a lot of people have moved into new apartments there since the fall of 2012, and more will come with Hunters Point South. There may not be any room left on the train by the time everything currently in the pipeline is built.

The J/M/Z and the 2/3 seem to have switched places, notably, so the zoning reforms should go in southern Bushwick rather than in Brooklyn Heights. But because there's still room on the R, we should allow some more residential development near Metrotech.

The Central Park West locals are an interesting challenge. As Jarrett Walker noted, when the "area served" by your station is half parkland or water, you need double the density to serve the same number of people - at least during the morning rush, when very few commuters are coming directly from Central Park. In consequence of the 2007 downzoning hysteria, that's not likely to happen soon. One thing that could help would be better crosstown bus service, so that more people can transfer from the bus.

It looks like, from the point of view of subway crowding, there isn't enough room to extend any of these subways. There may be the potential to reduce headways (which deserves its own post), but if not, I don't think it's worth a major capital investment if the rush hour loading is over 75% of the guidelines.
Posted by Cap'n Transit at 12:42 AM

I too found the 602 sq ft number and was amazed by the level of over simplification. The cars/train numbers appear correct though...

This effort should make relating this data to design loads a little easier, if I ever get around to doing it.

I disagree with the claim that there's no room to extend these lines. While the trains are all pretty full during rush hour at current service levels (by deliberate MTA policy), several of the tunnels have a fair bit of room for more trains as you noted previously. Furthermore, the most obvious outward extensions are Utica and Nostrand, which might largely attract riders who currently transfer from buses rather than increasing overall ridership/crowding. TriboroRX (even if implemented as extensions of the L and M) would probably not add much to hub-bound crowding. There's also a large increase in LIRR's hub-bound capacity currently under construction, which could free up space for improved commuter rail frequency to inner neighbourhoods and more use by in-city commuters, if organisational obstacles (e.g. fare integration) can be overcome; this is likely a better option for Eastern Queens than extensions of the E/F/7.

That last paragraph may not have been clear. What I'm saying is that any capacity for extensions will have to come from adding more trains, not fitting more people into the existing runs.

The service you run through to Bklyn on the IRT, at least during the peak periods, is determined by what you can get through Nostrand Jct. Given the current service pattern, with both & 7 Ave & Lex services to both legs (i.e. Flat & UA / NL), with all the crossover moves at the Jct which that involves, you cannot fit another single train out there, at least not in the peak. Let me tell you: I've personally written the weekday timetables for those lines and it would not be doable. The only way to get more service out there is a combination of reconfiguring the Jct and making Flat a strictly 7 Ave line & UA / NL a Lex line. Thus Flat would be served exclusively by the 2 & 3 and UA / NL by the 4 & 5. And that option would simply not fly politically speaking, rest assured.

@capt subway: Is that really so politically infeasible, especially in the context of being necessary for Nostrand/Utica extensions? Don't most people take the first train that comes and change at Franklin Ave anyway?

What's the limiting factor on 6 train service? The report says there are only 22 trains per hour on the 6 during the 08:00-09:00 peak, and even less in the shoulder-peak. Many two-track lines around the world are more frequent than that even off-peak, and the chart makes pretty obvious that more service is called for.

I don't know if these are limits. It runs local and express in the Bronx, local in Manhattan. Lexington Ave is screwy. The City Hall Loop is very very tight.

Actually the #6 runs 25 trains per hour in the AM peak and 22 TPH in the PM peak. (The PM peak is always less of an intense or sharp peak - people tend to go to work /school at about the same time but go home across a much wider time range.) The train count of a maximum of 25 TPH is determined by what the operating dept claims they can turn around the BB Loop.