Commenter threestationsquare pointed out that I made an error in the chart I posted about overcrowded subways. He also noted that it's Table 20 of the NYMTC Hub-bound Travel Study that gives floor space per passenger during morning rush in 2012. Here's a bar graph based on it: 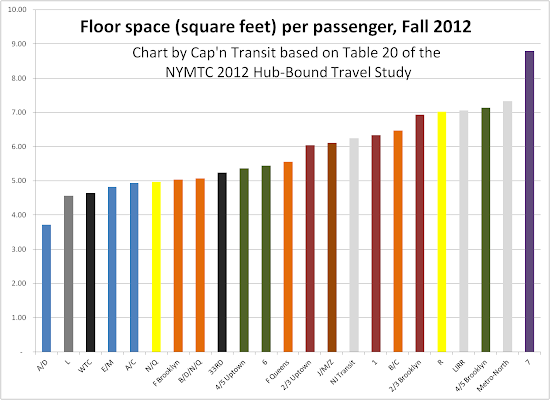 At the uncrowded end of this chart are the Metro-North and Long Island Rail Road commuter trains, and this makes a lot of sense. First of all, they have more seats. They run long distances, and people should be able to sit all the way from Speonk or Purdy's. But they're also premium service. There's a very good argument to be made that they're oversubsidized, but if we want to cut the subsidies the place to do it first is in station parking.

The other big group of uncrowded trains are the #7 and the trains that run through downtown Brooklyn and Brooklyn Heights (the 2, 3, 4, 5, and R), and a major factor in this is that there are alternatives that get people where they're going faster. A lot of people transfer from the #7 to the N or Q at Queensboro Plaza, and from the R to the N at Pacific Street or the B at Dekalb Avenue. Many people who can walk to these trains will walk a block or two further to get a quicker ride to Midtown on the B, D, E, M, N or Q.

This is not necessarily a bad thing, because it makes room for infill development, bringing new riders who fill up the train afterwards. It has already been happening for years on the #7 train, for example, where people get off in Jackson Heights to transfer to the Queens Boulevard trains. The space they leave is filled up by people who live in Woodside and Sunnyside. When those people get off at Queensboro Plaza, their space is taken up by people coming from the new developments in Long Island City. Something similar happens with the R in Downtown Brooklyn, but to a lesser degree.

The new buildings in Long Island City use that space on the #7 train to help get people out of their cars, by increasing the amount of carfree housing available in the area so that moving to the suburbs and buying a car seems less attractive. Unfortunately, it doesn't do that completely. Even though LIC's zoning does not require developers to build parking, it encourages parking construction by allowing them to build taller if they build parking. The result is the blight of garages lining Fifth Street.

In Downtown Brooklyn, particularly near the R station at Metrotech, the 2/3/4/5 stations at Hoyt and Nevins, and the big transfer station at Borough Hall the city has pursued a single-use vision of office construction and bent over backward to discourage residential development. Senator Schumer, who lives up the hill in Park Slope, recently reiterated that party line. In addition to use and height limitations, this is also accomplished with minimum parking requirements. The residents of Brooklyn Heights have fought reforms in these areas as well. The result is that residential development has been pushed to Dumbo, Fort Greene and Boerum Hill, which are a long walk from most of the stations on the 2/3/4/5 and R.

In a future post I'll talk about potential extensions for other lines. But these areas have transit capacity to meet the demand for walkable, transit-accessible living space a short distance from Manhattan. They just need to be zoned to allow it, without requiring parking that will compete with the trains and add more cars to an area that already has way too many.
Posted by Cap'n Transit at 10:34 PM

That result for the 7 is kind of staggering. When I was living in New York (ten years ago, now), the 7 was consistently one of the most overcrowded lines in the morning, along with the 4, 6, and E, all approaching East Midtown from the north or Queens. There was actually a lot of hairpulling on message boards about why people weren't changing at Queensboro Plaza to the N/W (at the time), which was far less crowded, with accompanying nailbiting about how it would only get worse when Long Island City started filling in in earnest.

I'm not saying the number has to be wrong, although the extent to which it's an outlier makes it slightly suspect. It's been ten years; plenty of time for things to have changed. Maybe a lot more people are changing at QBP. There's the new transfer passage at Court Square that might be pulling 7 riders to the E/M for destinations closer to 53rd St than 42nd or 60th. There's a lot more offices in West Midtown that make changing more attractive. But the implication that New Yorkers are changing from a less crowded 7 train to a more crowded any-other-train... call me cynical, but that just isn't the New York I know. Something is deeply weird here.

Capn, CComMack is right. This time the error is the NYMTC's, not yours. Looking at the figures in table 20, they are assuming a constant area of 602 square feet for all subway cars. This understates the relative crowding of the IRT lines with their small cars, and overstates the relative crowding of the A/B/D with their 75ft cars. Using your previous approach of comparing loads to stated car capacities (with an estimated capacity of 300 for the 75ft cars) yields this chart. The 7 is still undercrowded but no longer such an outlier, and the other lines likewise agree more with conventional wisdom. Incidentally the stated capacity figures imply a bit under 2.5 square feet per passenger.

@CComMack: If you're wondering whether something has changed from ten years ago, note that the Hub-Bound Study data includes numbers for previous years, and if you want further details the reports from previous years are even still there. Total Steinway tunnel ridership was reported as 190k in 2002 and 209k in 2012; 60th St, 248k in 2002 and 278k in 2012. As above, keep in mind that the division A trains are quite a bit smaller than the division B trains.

Thanks, threestationsquare, this makes a lot more sense. But your capacity assumptions for subway cars are very high (perhaps they're some sort of idealized crush load that never happens in reality).

The guideline capacity, which is a more useful basis for comparison, is 110 for 51 ft cars, 145 for 60 ft cars, and 175 for 75 ft cars. (To be thoroughly accurate, the NYCT guideline shifts down where service isn't very frequent, but you may not want to include that much complexity.)

I don't know what the analogous numbers are for commuter rail cars, but my gut feeling is that what you give is more in line with a guideline capacity than a theoretical crush capacity.

Also, it's important to point out that these numbers show loadings at the CBD cordon, which in some cases (like the 7) is not the peak load point. In other words, some of the lines do get more crowded than this, just not where the train enters the CBD. The other obvious example is the 1, which peaks at 103rd, and there are probably a few others in the Downtown Brooklyn area.

Thanks, all! I guess I need another post about this data. On Second Avenue Sagas, Andrew linked to this PDF which has loading guidelines on Pages 27-31.

The loading guidelines are interesting to refer to, but I would prefer not to use them in these calculations, because of how political they are.

... and through the magic of Google Docs I see threestationsquare is already adding the loading guidelines in! Interested to hear his take.

As Capn noted I've updated my chart based on the loading guidelines posted by Andrew. It's true that the malleability of these numbers makes them a somewhat problematic, but they seemed better than the overly-optimistic crush load capacity numbers I was using previously (especially since my number for the 75ft cars was just a crude guess). These load guidelines correspond to about four square feet per passenger, which seems intuitively reasonable to me.

Thanks! This makes a lot more sense to me.

Also the commuter rail capacities are just the number of seats so should maybe be a bit higher. (I'll assume that the use of higher-capacity bilevel coaches in the LIRR and NJT tunnels is roughly cancelled out by the use of lower-capacity Amtrak coaches.)

The whole problem with the Loading Guidelines, as anyone who actually works / worked "on the ground" with the NYCTA (and not "upstairs" in some executive suite) knows, is that they are, written in sand as they are, a total fiction, pure BS. The only purpose they really serve, from what I could ever discern, was so that those making the day-to-day operating decisions could gauge just how far off the mark they actually were, just how outrageously they were actually lying to the public.

As a good example: the "regular" or "pick" or "posted" timetables must adhere to the guidelines in effect at that particular moment, albeit insofar as that is possible given any number of other constraints (track, signal, interlocking, terminal capacity, car availability, etc). Unfortunately the "regular" timetable is rarely ever actually run. 90% of the time "supplement" timetables are being run. And the vast majority of these supplements REDUCE service, including right through the peaks. The reasons for these are many. A major cause is "skeletonized" track with a resulting slow speed order in effect, an especially serious impediment to peak service delivery. In the off peak periods it is almost always track / capital work of one type or another. I worked for years supervising the production of "pick" & "supplement" timetables for the IRT lines. The degree to which the "supplements" often totally trashed and eviscerated the "regular" timetables was truly appalling.

This bad situation was made far worse by new "adjacent track" flagging rules that went into effect around 2009.

And one more word on the guidelines. They are based upon field traffic checks. These traffic checks are done by, mostly, low paid, often part time traffic checkers who literally count the bodies in each car of passing trains at a given point. This raw data is than "analyzed" by "experts" back in the office (I worked, from time to time, as one of those "experts"). We were regularly told by our bosses to "correct" obviously wrong data. For example, a number of years ago a Director of our Dept didn't like "lumpy" loading checks. He liked to "smooth out" the load over a longer period of time, thus showing less of an actual peak. In this way he could recommend against adding a train, or trains (along with the trains' two person crews). That made him look good. Hey, he just saved the TA the cost of a train and crew.

BTW the data regarding the #7 is in large measure correct. And this has held true over the last 50 years I'd venture to say. That is: there are two maximum load points on the southbound (i.e. TSQ bound) local: (1) leaving 82 St & (2) leaving 40th-Lowery. The maximum load on the s/b Exp is leaving 61-Woodside. And, yes, both local & express tend to loose a lot of passengers at QBPlz, thus putting them both somewhat below "guideline". This is a good thing since the out of control development in LIC over the last decade has had some #7 train capacity to play with.

North bound in the PM peak the max point on the express is leaving QB Plz, on the local there are two points, (1) leaving 33-Rawson and (2) leaving 74-Bway.

Lets hope the new terminal at 34 St is designed in such a way as to permit an increase of peak through put by another train or two.

How come more people get off than on at 33rd Street in the morning? I'd have expected the maxima to be leaving 82nd and 33rd, i.e. just before the two transfer points to the E/F and the N/Q.

33rd/Rawson Street is the stop for LaGuardia Community College and several high schools.