It's time to extend the N train to LaGuardia

Twenty years ago, Astoria leaders blocked a plan to extend the elevated train line that serves their neighborhood. The proposal would have run the trains a few blocks north past their current terminus at Ditmars Boulevard, then east to LaGuardia Airport. In addition to the value of getting airport travelers out of cars and taxis, the line would have served new stops in areas of northern Astoria and Woodside that currently have no subway service. It would also have made better use of the Astoria Line, where trains were often fairly empty just a few stops outside of Midtown. 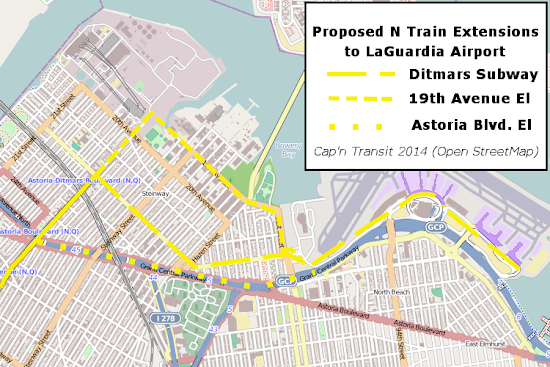 In a move that baffled me at the time, "the community," meaning the people with political power in the neighborhood, came out strongly against the plan. Ben Kabak has a good summary with links, but the gist seems to be that they didn't like the idea of an el, and they didn't like the disruption caused by constructing a subway.

This came up in Ben's blog and podcast again recently because the MTA is set to inaugurate the M60 Select Bus Service, and a business group called the Global Gateway Alliance released an open letter calling for "true Bus Rapid Transit" between the airport and the Ditmars Boulevard terminus of the Astoria Line. Ben was baffled by several assertions in the letter (a regular feature of this story is the bafflement of transit advocates at the bizarre reactions of city elites to what seems like a very straightforward case for a subway extension), most of all the blithe dismissal of rail by noting it was "shelved due to community opposition."

The train was indeed shelved due to community opposition, as everyone reminds us, but what they fail to note is that the "community leaders" are all gone. Read through the list of politicians who came out against the plan. Denis Butler and Walter McCaffrey are dead. Peter Vallone, Senior is retired, and so is George Onorato, and Vallone Junior has been term-limited out. John Sabini was hustled off to the Racing Authority after a DUI conviction in 2007.

Not only are these windshield-perspective politicians gone, but their replacements are much less wedded to the idea that cars are the future. Senator Michael Gianaris and his protégée Assemblymember Aravella Simotas are disappointing in some ways, but they've kept their car activism pretty low-key, as has Senator José Peralta. City Council members Jimmy Van Bramer and Costa Constantinides are both progressive on transit issues. Van Bramer, who represents me, has supported congestion pricing and the Midtown Tunnel Bus. Constantinides lost a bit of cred by coming out way too early in support of another term for Jimmy Vacca as head of the Transportation Committee, but has been a strong supporter of livable streets issues overall.

I believe that Van Bramer is a member of Transportation Alternatives, and I know Constantinides has been not just a member but an active supporter, marching with them at public events. They may keep their One Less Car T-shirts in the bottom of their drawers, but they definitely do not see cars as the only way to prosperity for their constituents. Community Board 1 may still be led by trolls who think parking is Astoria's number one issue, but they'll be gone soon as well. More importantly, the voters and donors in that area care more about trains than parking today.

Another baffling element of the 1990s opposition to the extension was that it seemed like the objections could all have been overcome with some thought, but the "community leaders" weren't interested. The line could have been run entirely over the Grand Central "Parkway," or put underground as far south as Astoria Boulevard. A solid proposal that addresses those objections, especially if it has the backing of business leaders like the Global Gateway Alliance, should be able to win over Gianaris, Simotas and Constantinides, and eventually the rest of Astoria. It's not 1999, people, and we shouldn't be acting like it is.

It's hard to do it underground - the line needs a place to transition from elevated to underground. It may also be too expensive for the expected ridership.

The other issue is that LGA probably generates less ridership than Astoria Boulevard. The N could go on Ditmars but then transition to Astoria instead of swerve to the airport, and just make local stops. Astoria's wide enough that a two-track el would be more like the Sunnyside 7 el than like the Woodside 7 el.

I kind of like the idea of a W to the airport going over the GCP (assuming thats brought back after the Q goes to 96th/2nd Ave). The airport ridership certainly wont call for both the N and the W to go there.

Thanks, guys. I think the NIMBYs were right that having the train go underground at Ditmars is a Bad Idea. To me, it seems like the best place to go underground would be just north of the Astoria Boulevard station. Hell, they could have asked for the train to be put underground at 39th Avenue, but they just wanted it to go away.

I would not want this to go express from 31st Street to the airport. It may be a short distance, but there's a pretty large population in the area, with several clusters of apartment buildings. Along Ditmars you could have stops at 31st, Steinway, 48th and 78th Streets. 19th Avenue and Astoria Boulevard are both much further from the population clusters.

"Community Board 1 may still be led by trolls who think parking is Astoria's number one issue, but they'll be gone soon as well." CB members are lifetime appointees, like the US Supreme Court justices. ;-)

The problem with running on the GCP is that it splits frequencies, cutting service to Ditmars.

At some point, the el needs to go underground, or at least at-grade. A runway ends right before the GCP, and a very long path is kept clear past this runway (the GCP has very short floodlights here). Any sort of train connection would have to be at-grade or below-ground crossing this landing path.

I think that LGA would be best served by an 82nd St station with an AirTrain. The Astoria el should be run up to Flushing via Astoria Blvd, going underground before heading into Flushing and terminating at a lower-level Main St perpendicular to the existing train line.