Two years ago I wrote that for truly affordable housing we not only do we need an adequate supply of living space, as Matt Yglesias explains so nicely, but also a decent range of quality. I mentioned that this pricing distribution could be achieved in several ways, some of them very unfair: 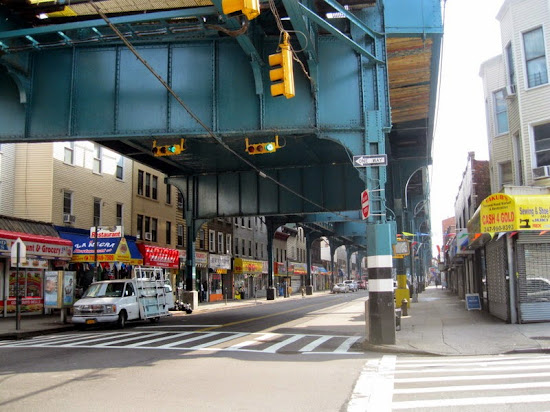 To prevent segregating the poor into inconveniently located bad housing with crime and pollution, we need to make some safe, solid housing available closer in, integrated with the rich people's housing. that is still affordable. In order to do that, we need to allow housing that's cheap in the non-dangerous, non-segregated ways. That means housing that's small or ugly, with crappy views and no doormen. Maybe housing that allows loud music if it doesn't bother anyone else. Regardless, it should still be well-built and well-maintained, and safe from pollution and crime.

Stephen Smith is fond of saying that "filtering" will keep prices low on a large enough portion of the available housing. Filtering is the idea that the price of older housing will be lower, reflecting the aging of materials and changes in consumer tastes. Jane Jacobs memorably said it about commercial space: "New ideas require old buildings."

This filtering hypothesis would make sense, all else being equal, but all else is not equal. There has been a serious decline in the quality of building since World War II, with the result that many buyers and renters will choose a prewar apartment with its amenities (hardwood floors, high ceilings, attention to detail, solid construction) over a postwar one with "modern" amenities (Stephen recently mentioned central air conditioning and laundry on premises).

A lot of postwar construction is also anti-urban, even in the hearts of cities, whether through tower-in-a-park architecture like Stuyvesant Town or excessive auto-oriented design like big driveways. Some, like the Big Six towers in my neighborhood, combined the two for that classy tower-in-a-parking lot ambiance. Some, like Wesley Grove in Asbury Park, have their de facto primary entrances and exits facing away from the street and towards the parking lot.

Because of this, it helps to have other ways of generating a range of quality options in the housing market, and one of those is elevated trains. I may have picked this idea up from something Stephen wrote; he certainly likes els.

Now, the el in my neighborhood, the Flushing Line, is really not that nice. In addition to blocking out all the light on Roosevelt Avenue, it makes so much noise that you can't talk when it's clanking over you. And if you look at estimated rents on Zillow, you'll find that two-bedroom apartments facing the train tend to rent for several hundred dollars cheaper than those around the corner.

Els that are built nowadays are much quieter. They're not unpleasant to live near, but they aren't as nice as a subway. The result is a less extreme range of rents, but still enough to provide affordable housing, especially when combined with other factors.

Elevated trains are not only cheaper to build than subways, but when combined with zoning that allows for substantial amounts of housing to be built for relatively low cost (i.e. highrises without parking) they can provide genuine affordable housing, and thus be a real tool in fighting gentrification.
Posted by Cap'n Transit at 12:51 AM

A lot hinges on whether you consider noise pollution to be a form of pollution.

Not sure how much of an issue that is. Really, if it only means "you cant keep the windows open", this is probably true for a lot of people who are sensitive to noise in NYC (most of the noise currently coming from cars).

In a unit with modern windows designed to be facing an El, with a modern El, and using air conditioning, vibration would be a bigger issue than noise if anything. With a modern viaduct and well-maintained welded rail, I think it would be fine even on a block like mine with old buildings and crappy windows.

The Puck Building shakes noticeably every time a train goes by AND is on Houston Street, and is being converted into luxury condos. Id actually worry that in a desirable enough area the El wouldnt even give the affordability effect the Cap'n is looking for, not the other way around.

Buildings along Amsterdam Avenue, a truck route on Manhattan's Upper West Side, deal with deafening noise from motor vehicles and trucks. It is why some people want the protected bike lane, but that's another conversation.

Potential andidates for extended el's are the #1, #4, and #2/5 lines in the Bronx. These trains meet bus routes heading from Yonkers and points north. (The transfer points are crappy where bus riders have to wait exposed to the elements.)

Extend the #4 to McLean Ave, and the #1 to Getty Square. MetroNorth ridership from these points is quite low, with most people taking a bus to the subway.

The #1 line in particular would be great for TOD along Broadway in Yonkers. And McLean Ave has a suburban shopping center where the train would come up Jerome Ave.

One problem is that NIMBY resistance would be fierce. Riverdale residents are freaking out over paving the Putnam Trail in Van Cortlandt Park. How would they react if you put an el between their neighborhood and the Park? You're talking about some pretty wealthy institutions, including Manhattan College, Fieldston and Horace Mann Prep schools.

Eh. The reason Metro-North ridership a spit's distance from the 2 is low is that Metro-North service is not useful for urban trips. Fix the organizational problems with Metro-North first, and only build viaducts later.

Building elevated lines helps with the third point by reducing the cost of transit construction and thus making more land available. The effect of noise and light blocking are negatives that have to be balance against the positive of more construction.

@Alon: Can you point me towards a good resource on the "organizational problems with MetroNorth"? I occasionally mention the Paris RER, but would like a more direct analysis of MetroNorth if one exists as a guide.

Is anyone else familiar with the Schwebebahn in Wuppertal, Germany? It's an electrically-powered monorail, built in 1901, and still operating today with 3rd or 4th generation cars. The structure is much less intrusive than a NY or Chicago 'el, and the trains are so quiet you can barely hear them go by when you're standing right under the 'el. I rode on it a few years ago, and I'll never forget it. I think it would be a low-cost, low-impact way to provide more rail transit for American cities,

Almost every resource I know about organizational problems with US commuter rail either was written by me or is referenced on my blog. (Some others, about crew schedules, are on The LIRR Today.)

But I'd start with this post about the problems that make people not ride commuter rail where there is a parallel subway line, such as in Wakefield.

I don't say so in the post, but Yonkers is another example of this: if you compare Metro-North ridership with city-to-city commuting patterns, you'll see that in most Westchester towns, even Mount Vernon, Metro-North ridership is comparable to the volume of commuters from the town to Manhattan, with the exception of Yonkers. In Yonkers, Metro-North only has a fraction of the Manhattan commuter market. There, people have a bus-to-subway alternative, while the high Metro-North fares are especially problematic given Yonkers' working-class character.

Of course, Yonkers also has the problem that half of Metro-North's station radius is wasted on fish. The 1 extension is a plausible idea, although there are ~100 km of subway that should be built ahead of it. It's the 2/5 extension, directly parallel to Metro-North, and the 4 extension, through nowhere, that will never be useful.

Nobody else has written about it because they don't see a problem.

No one uses the close in commuter stations that are near the subway because they aren't going to Grand Central or Penn Station. By the time they loiter around for the commuter train, even if it's 4 times an hour off peak, get to Penn Station or Grand Central and then change to the subway they might as well take the subway all the way.

I live next to the elevated Metro-North tracks in a 110 year old walkup building and I really wanted to believe that new construction would be required to block out the noise pretty thoroughly. So I was eager to check out this new nursing facility just built on the other side of the tracks: http://www.dnainfo.com/new-york/20131217/east-harlem/former-goldwater-hospital-patients-arrive-at-285m-east-harlem-facility

I was really disappointed that the noise from the tracks was still pretty annoying in the auditorium of this brand new facility. I'm not sure what the requirements are for acceptable noise levels in new construction but they should be strengthened.