In a recent post I argued that the Astoria elites no longer have the same opposition to extending the N train that they did just seven years ago. This extension would not only connect to LaGuardia, but it would be able to serve parts of Astoria east of the current line. But Astoria is so big that even an extended N train and the existing R and M service on Broadway leave large stretches of it unserved. 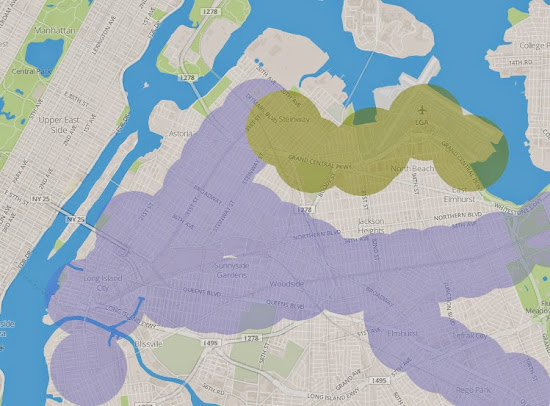 For this map I used the half mile circles that are so standard in transit planning that Jeff Wood named a blog after them. They're not always the best tool for estimating transit coverage, but my previous apartment was just inside one of these circles, and taking the train was frustrating but doable, so it's about right for this job. I even think that some people would walk into LaGuardia Airport to catch a subway.

The big gap between the current circles for the #7 train and the potential circles from stops in and near LaGuardia Airport corresponds rather neatly to a cluster of red dots on this map made by the Pratt Center in 2008: 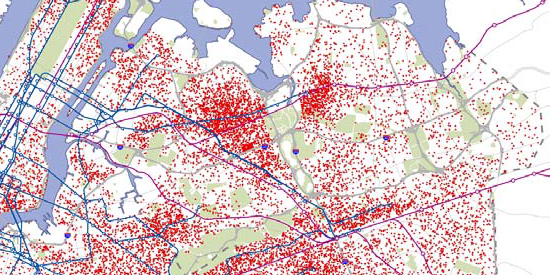 This is a map of the homes of people commuting more than an hour to jobs where they earn less than $35,000 per year. Many of them live in the Astoria Houses and western Astoria generally, but there is a large concentration in East Elmhurst and northern Jackson Heights, where a long walk or a slow bus ride to stations fairly far out on the #7 train makes for a tedious commute.

There is a potential solution, and it's not the battle for "BRT" on Junction Boulevard that the Pratt Institute recommends, but is not going to fight. As the Hub-bound Travel Survey showed, there is capacity in the 63rd Street Tunnel for more trains. The Sixth Avenue local tracks are shared with the M train, but they run about 22 trains in the 8AM hour, leaving space for 8-10 more trains.

What service could we feed into the tunnel? The city examined this question 75 years ago, and their answer still makes sense today. The line would run north on Twenty-First Street, then east on Ditmars and Astoria Boulevards. It would turn south on 108th Street and east along Horace Harding Boulevard, which is now the Long Island Expressway. 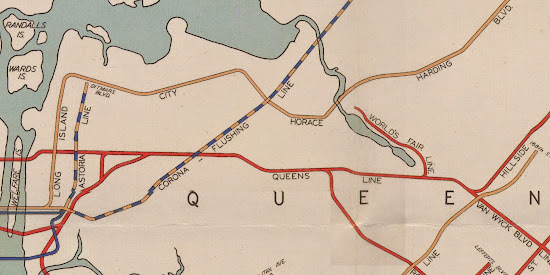 At this point the demand for new housing is so high that any improvement in access to Manhattan is likely to fuel concerns about gentrification. In other words, we would build a train for the poor people in East Elmhurst, and then the rents would go up and no poor people would be able to live in East Elmhurst anymore. To allay those concerns, I propose building it as an elevated train. It would probably also be easier to build it elevated along 21st Street, so that it will be well above the water table. If the people on Ditmars complain, we can put it underground there.

Since there is only room in the Sixth Avenue tunnel for one additional service, we can't run express trains. It's not clear that there would be demand in Glen Oaks or Fresh Meadows for an all-local train to Manhattan via East Elmhurst, but it should probably serve Queens College at the very least.

Should this be a priority? Maybe, maybe not. The projects mentioned in Alon's recent posts all have a lot of merit to them, and at this point I don't have a good way of judging. If you pooh-pooh this idea, though, I want to hear what your alternative is to make use of the spare capacity in the Sixth Avenue local tunnels.
Posted by Cap'n Transit at 12:53 AM

I think the line should just run to LaGuardia Airport. You risk pushing out the Astoria riders if you go too far east. An LIE subway is a good idea, but as a separate project and initially as a shuttle.

First, since all of this is a lower priority than Second Avenue Subway, assume that SAS is already in place, including the track connection from Phases 3 and 4 to the 63rd Street tunnel. Since Phases 3 and 4 will have more spare capacity than Sixth Avenue, whatever additional line is built should send trains to Second and not Sixth.

Now, because of the high population density north of Roosevelt, I'd say the best line to build is along Northern, to Flushing. It would also function as a relief line for the 7, which is very crowded east of Broadway.

Just because it takes them an hour to get work doesn't mean they work on Sixth Avenue. The Astoria Line connects to the 60th Street tunnel. You want to look how much capacity there is on the Broadway BMT.

Sure guys, Second Avenue, Broadway, whatever.

Alon, the problem with a subway on Northern is that it leaves the areas north of 30th Avenue underserved, while overlapping substantially with the #7 train's walkshed. This is not a horrible thing, but it's not the best coverage.

Astoria Boulevard could also benefit more from any traffic calming brought on by the subway/el, since it's 130 feet wide, compared to 100 for Northern.

Not connecting to the 63rd Street tunnels to get to Sixth Avenue works just as badly for connecting to Second Avenue. Unless you want to figure out how to wedge more trains through the Steinway tunnels your choices for the Astoria line are the Broadway BMT, the Broadway BMT or the Broadway BMT. Sorta like how the people already filling the trains between Newark and Jersey City on PATH will get really really annoyed if the train goes to Elizabeth instead you have to consider where you are gonna send the train. The people using the Broadway BMT aren't particularly concerned about whether or not the IND has excess capacity. That is an important detail.

For someone who has an hour long commute because they work out at JFK whether the train goes up and down any street in Manhattan isn't much help.

All other things being equal, the Astoria Boulevard Line should utilize a new tunnel and connect to 86 St in Manhattan instead, leaving a provision for a second tunnel into Jersey at the other end of 86. People seeking downtown Manhattan can transfer.

"If you pooh-pooh this idea, though, I want to hear what your alternative is to make use of the spare capacity in the Sixth Avenue local tunnels."

Unrelated to the other comment, is there actually spare capacity in the Sixth Avenue local? The M shares those tracks with the F which is presumably accounting for whatever difference exists between the total capacity of 6 Av and the capacity utilized by the M. There might be capacity in the 63 St Tunnel itself but the appropriate use for that is, as Alon mentioned, some service to counterbalance the capacity otherwise lost on 2 Av by the presence of the Q.