Along the Chemical Coast to Staten Island

People seem to be captivated by the unused stretch of the Staten Island Railroad along the North Shore of the island. It makes sense to do something with it, because it's the part of Staten Island with the poorest population and the lowest car ownership. But the whole discussion is pathetic, ranging from the sorta reasonable (restore the Staten Island Railroad passenger service to Arlington) to the mildly faddish (light rail!) to the moronic (bus rapid transit!). For some reason, people love the idea of extending the Hudson-Bergen Light Rail over the Bayonne Bridge and connecting it to either the North Shore line or the West Shore line. 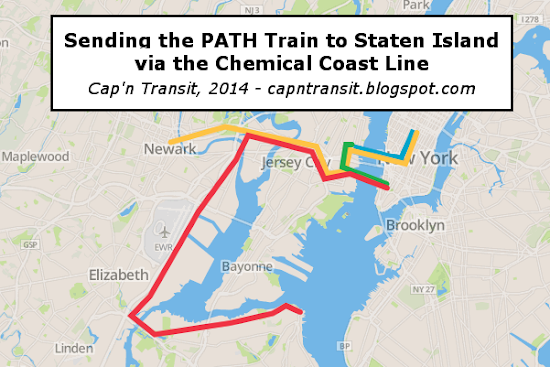 Hardly anyone looks west across the Arthur Kill to Elizabeth. That makes some sense, because I'm guessing that most of the people who are commuting outside the borough are going to jobs in Manhattan. But it's short-sighted, because it ignores the fact that there's a railroad bridge that was restored to full functionality in 2007.

The Chemical Coast Line is a freight railroad with a wonderfully evocative name, originally part of the Central Railroad of New Jersey. Like the Arthur Kill Lift Bridge, it is lightly used. We wouldn't want the PATH trains to share tracks with chemical tank cars, but there is plenty of room in the right-of-way and on adjacent properties for two tracks of dedicated passenger service.

The single-track Arthur Kill Lift Bridge sees three freight trains a day. The main concern is how often the bridge would need to be raised to allow ships to pass under it. The current PATH train to Newark runs every four minutes during rush hours and every fifteen minutes off-peak.

The key is that the trains would go express for the nine miles from Journal Square to the Jersey Gardens Mall in Elizabethport, just like they currently do for the five miles from Journal Square to Harrison. Given that it takes 25 minutes to get from the World Trade Center to Newark, it would probably take at most 35 to get to Elizabethport, and under an hour to Saint George. Compare that to the time it takes to ride a bus to the ferry and walk to the office, or to sit in an express bus on the Gowanus Expressway.

In terms of capital costs, we're talking about rebuilding the North Shore rail line and making it flood-resistant - part of it washed away during Hurricane Sandy. Then we would probably have to build a new connection with the Chemical Coast line and run new track up to Port Newark. From Newark we would probably have to build some new track, a new bridge over the Passaic River and a new junction with the existing PATH line. I don't know how much all that would cost, but could it be more than the billion and a half that the Port Authority wants to spend on the useless extension to Newark Airport?
Posted by Cap'n Transit at 1:51 AM

It's so much longer than a direct southward extension of the light rail from Bayonne. Also, it goes past the airport without stopping (although it doesn't pass close to the terminals). If rapid transit has potential on the north shore of Staten Island, I think the more direct route towards Manhattan must be preferable.

Meh. First, it's circuitous like fuck - the central parts of the North Shore would get a faster trip via the ferry than via the Chemical Coast line. And second, there's nothing along the Chemical Coast that justifies service, except maybe Elizabethport. Trains would be making one stop between Arlington and Journal Square, and they still wouldn't be time-competitive.

"But the train from 33rd Street west stops at Journal Square, presumably because there isn't enough ridership to run the trains all the way to Newark."

You pretty obviously don't ride the PATH. I'm not sure what the reason is but the giant trainload of people who transfer at JSQ to get to Newark probably disagree with this. I think the reason is they don't have the capacity to run a line to WTC and to 33rd, so they have to choose one.

I like the idea, but the PATH is running at just about complete capacity on the 33rd st line that goes through JC. During peak commuting periods you will often have to skip a train because it is 100% full.

Having a rail line run through elizabeth to union college makes more sense.

Wow, you guys are a tough crowd!

The whole point of running the trains on the Chemical Coast line is that the trains can go fast with only one stop between Staten Island and Journal Square. The light rail may be shorter, but it takes forever - i.e. fifteen minutes from Eighth Street to Exchange Place in the morning rush.

Thanks for the information about ridership, Moraller. I don't know why they wouldn't have the capacity to run a train to WTC and 33rd, but if there are that many people from 33rd going to Newark, they can send that train to Newark and the WTC train to Staten Island, as I drew it on the map.

I have to agree with James. The idea of PATH to the North Shore has been kicking around in my head for a while, but it really does seem to make more sense to build it as a continuation of an EWR extension from Newark. Follow the railroad to Elizabeth, and from there a few possibilities exist, and it would seem that not all of them require tunneling.

Yes this is more costly, but all things considered seems a better use of resources: less duplication, better connections in New Jersey, providing service to Newark proper at all. Frankly I don't see the Manhattan bound traffic as the primary thing that this will be attracting, and trying to shave whatever can be by using the Chemical Coast Line really doesn't seem likely to attract anything like enough to justify the disadvantages.

If you send the Newark-World Trade Center trains to Staten Island the people who use them aren't going to walk to Journal Square, They've spent hundreds of millions of dollars to extend platforms for ten car trains. And want to spend a billion or so to drag them out to the airport to have someplace to store them. The people crammed onto those trains will get really really annoyed if they are filled up with Staten Islanders.

I wouldn't use the phrase "less duplication" to refer to any PATH extension that parallels the NEC and makes the same stops.

Yes, Beaurocromancer, sending the train west of EWR only makes sense if (a) there are lots and lots of Staten Island residents who want to go to Newark and Elizabeth or (b) there are not enough people in Staten Island to fill the train, so you have to pick people up in Newark to make it worthwhile. There's no evidence that (b) is the case, and if (a) is the case, you could just extend the thing to Tottenville.

I have the impression that the freight use of the chemical coast is far from "light" in the same way as the north side of Staten Island.

Think big. Metro North to Tottenville and NJTransit to Jamaica. The North Shore is never going to have enough people to warrant 8 car PATH trains. Two car trolleys shuttling between Cranford and St. George might be just right. Gets all of the people heading to Wall Street off the subway or PATH and out of Grand Central or Penn Station. Gets people in Staten Island service to Brooklyn and much faster trips to Manhattan. It could connect with the Triboro in Sunset Park.

How is that "thinking big," Adirondacker? There are over 3000 people who commute to lower Manhattan every day. That's three eight-car trains full.

Cap'n, I'm using Destination Analysis on all of Staten Island, and there are way, way more than 3,000 people commuting to Lower Manhattan. The plurality census tract is in Downtown Brooklyn, but there are tens of thousands of SI-to-Manhattan commuters.

Three trains a day isn't very attractive. Or worth a few billion dollars.

Perhaps we should bite the bullet and construct a tunnel from Second Avenue to Staten Island. It seems that if the goal is to increase housing supplies, then extending the subway to Staten Island is our lowest hanging fruit.