One of the arguments given by proponents of decking the Sunnyside Yards is that Sunnyside is cut off from Astoria and Long Island City by the Yards to the north and west.  These rail yards break up the street grid, leaving about nine ways to walk across them. 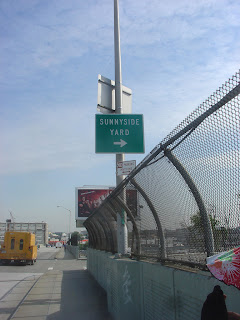 Photo: Nick Normal / Flickr
All but one of the current routes across the Yards involve walking through industrial areas, which can have low foot traffic, especially on nights and weekends.  This can discourage many people, especially vulnerable populations like women, children and elderly people, from walking.  During working hours people tend to park on the sidewalks, contributing to a different hazard.

Four of the routes involve crossing long bridges over the Sunnyside Yards.  The bridges are all pretty boring, especially the ones that have high barriers blocking the view.  They are all noisy because they have heavy car traffic and wide, flat concrete surfaces to reflect the noise back on travelers.  The Queens Boulevard Bridge is particularly noisy because the overhead #7 train viaduct produces its own noise as well as reflecting noise from the cars.

The one crossing without a bridge or much industrial activity, 48th Street, has heavy foot traffic, and that brings its own problems.  The sidewalks can get congested during peak times, and the foot traffic draws sidewalk vendors, who further add to the congestion.

North of the Yards, the routes east of Queens Boulevard all have to cross Northern Boulevard, a notoriously dangerous stroad, due in part to the historic preponderance of auto-oriented businesses but also to a longstanding culture of permissiveness promoted by policies at the Department of Transportation and the NYPD that put the movement of cars ahead of the safety of everyone.

The proposals for the Sunnyside Yards echo current and planned developments in Atlantic Yards and Hudson Yards that include platforms that would support buildings alongside the streets for a better pedestrian experience, cross streets between the buildings to calm the traffic, and new parallel streets crossing the yards for additional connections.

Assuming that the developments get built as advertised, the added buildings and cross streets would definitely improve the experience of walking over the yards.  But they would do nothing by themselves to make the rest of the walk safer or more comfortable.

A walk from Sunnyside to Court Square across the Thomson Avenue Bridge might be a better experience on the bridge itself, but it would still pass through the industrial areas along Queens Boulevard or Skillman Avenue, and across the path of reckless drivers on Van Dam Street and Thomson Avenue itself. A person walking across the 39th Street Bridge would similarly have to deal with dangerous behavior and humiliating treatment on Northern Boulevard and in the industrial areas before and after the bridge.

This is actually not unique to Sunnyside.  It's a widespread problem that affects bridges over rail yards throughout the metro area, and around the world.  We should find ways to deal with it, but a multi-million dollar real estate deal is neither necessary nor sufficient.
Posted by Cap'n Transit at 11:30 PM