One cornerstone of the arguments for the Queensway rail-trail is that the MTA isn’t interested in restoring passenger rail service. Queensway advocate Peter Beadle tweeted, "point is MTA is not building a train, and new study only confirms prior MTA assessment that train not worth it." Former Parks Commissioner Adrian Benepe, now in charge of studying the rail-trail proposal for the Trust For Public Land, wrote, "The MTA and the LIRR have studied rail reactivation several times and each time concluded it's not feasible." The New York Times Editorial Board wrote, "Then there is the question of when the M.T.A. would get to this capital project, which would be one of many on its overflowing, underfunded to-do list. The likeliest answer is never. The M.T.A.’s capital plan is only half-funded; the agency is strapped by debt and is hard-pressed to protect the infrastructure it has." 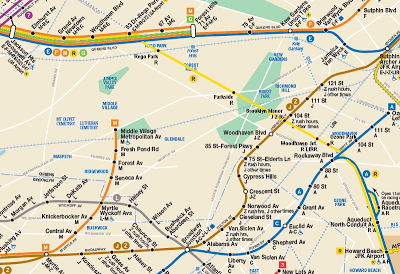 There are actually two claims here: the MTA as expert, and the MTA as leader. Both of these are pretty bizarre claims to anyone who has ever dealt with the MTA. They are clearly meant not as real arguments, but as quick ways to silence opposition.

First, the "MTA as expert" claim relies on a series of dubious assumptions: The MTA is an organization of highly skilled, knowledgeable professionals. They have conducted a thorough cost benefit analysis of all service restoration possibilities, and decided that none of the possibilities would produce benefits that justify the cost. Their ideas of costs and benefits are in perfect alignment with those of both the rail and bikeway proponents, and their judgment is valid for eternity.

In reality the MTA does indeed employ many talented, well-educated people, but they also employ some ignorant and unimaginative ones, and there’s no guarantee that the right ones were studying the question. There is also no guarantee that the MTA’s priorities at the time of the study have any relationship to my priorities now. This is why I want to see the reports of "prior MTA assessment." These reports are not on the MTA website. Presumably the rail-trail advocates have copies, but with one exception they have not provided any, although they have been asked directly.

On December 30, one rail-trail proponent, Doug McPherson, posted a link to a 2001 study hosted on the Capital New York website. If you read the study, you can see why the trail advocates don’t want to share them: it was specifically investigating the value of train service as a one-seat ride between Midtown and Kennedy Airport, and didn’t consider the potential value to people going anywhere else. It put the basic cost of restoring the tracks and third rail at $250 million (about $350 million in today’s dollars), which is substantially lower than all the scary numbers that the trail advocates like to throw around.

I suspect that the other "several" studies cited by Benepe are similarly either irrelevant or supportive of restoring train service. Maybe someday one of the advocates will post a link so we can decide for ourselves. Maybe not, though: one advocate, Anandi Premlall, was "delighted" by a 2001 Wave article saying a report had recommended against restoring train service.

The "MTA as leader" claim is similarly suspect: the MTA must take the lead on all subway expansion. Their priorities never change, so if they have ever expressed a lack of interest in anything it is final, and no amount of public demand will convince them to do it.

The reality is that the MTA takes its lead from others. The Governor has enough control over the MTA Board that its Chair essentially serves at his pleasure; if he made it a priority, the MTA would make it a priority. The current Governor also controls a lot of pork in the form of the “Regional Economic Development Councils” that have steered a million dollars towards planning the trail.

The Mayor of New York City can also set priorities, as we saw with the extension of the #7 train to Twelfth Avenue. This was nowhere on the MTA’s priority list until Bloomberg decided he wanted it done and arranged the funding for it. A Mayor who can get similar funding could get this moved to the top of the list; so could a Senator or a powerful congressmember.

Rail-trail advocates’ claims that “it’s never going to happen” are just bluster, and their claims to want rail “if it were possible” are transparent lies. If these advocates spent the amount of time and political capital on getting train service instead of a bike trail, the city would be clearing trees right now.

In my view, a lot of these people who want Queensway are very selfish and only concerned about themselves. There also are those who don’t want ANYTHING AT ALL done because they are concerned if EITHER proposal (Queensway OR Transit) happens, they will lose property that is illegally encroaching on the ROW.

The people who want Queensway to me want it because they are afraid if the line is converted to subway usage, they will see people who are not “their kind” suddenly arrive like was seen in some areas during the 1950’s and early ’60s. They (or their parents) also likely still think of the subway as how it was during the 1970’s and early ’80s when it was at its absolute worst: Graffiti-strewn, crime-ridden and so forth. They don’t or don’t want to realize that the subway of 2015 is a MUCH different place than that of 1980. While the subways still have their issues, it’s nothing like it was 35 years ago and people have to realize that.

A lot of this is also conditioning that comes from the days of Robert Moses, who abused his power to the point where today NOTHING often gets done without a massive fight because people are conditioned to fight anything worth doing solely because of how Moses trampled on people back in the day. Obviously, people back then were influenced a lot differently than today, but what Moses did is still being felt today in many ways, and not all of them good.

Imagine if the MTA had an entrepreneurial bent. The MTA quietly buys up land and houses around the proposed new subway stations; land has to be relatively cheap there now. Then builds the line and at the same time builds (or leases land) for lots of dense, walkable TOD sites where the rents help recapture the MTA's investment. (Think Hong Kong: http://marketurbanism.com/2014/10/23/how-hong-kong-pulls-off-transit-oriented-development/)

In case anyone argues that gov't can't buy up land speculatively, there is some precedent for government buying up land near places where it is going to invest. Philadelphia mayor Ed Rendell surreptitiously purchased the Reading Terminal Head House to capitalize on the construction of the convention center.

More on the land value around the QueensWay.

I was trying to figure out where the money is going to come from for the Queensway. Then I had a 'doh!' moment: $120 million will be delivered by Cuomo from the bank settlements. And it will be his 'gift to Queens', or at least, his version of auto-dependent, crappy transit, Queens.