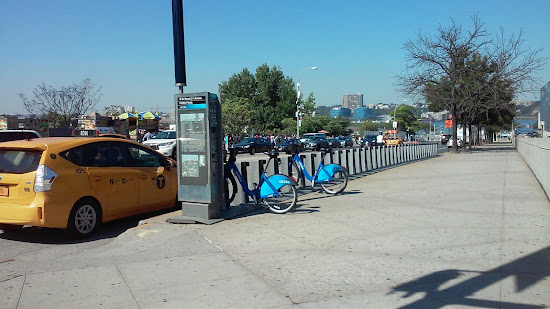 I really had only one worry: when I pulled up the Spotcycle app, it only showed me one free bike at the station. There was a second bike, but it was unavailable. I'm glad nobody took that bike before I got to it. I hope Citibike adds more docks or schedules it for more rebalancing, because it looks pretty popular.
Posted by Cap'n Transit at 11:48 PM

I just wish Hudson Yards included a bigger inter-city bus station, and not just a curbside pickup. When starting from scratch, it could have been the Port Authority supplement people are calling for.

Amazing how Mega and Bolt have become the inter-city mode of choice among my friends and family. Nobody even bothers to check the Amtrak prices anymore.

Yup, everybody uses Megabus and Bolt - except the ruling class which probably doesnt even know they exist. Hundreds of people standing on the sidewalk at all times of the day, in all weather conditions, very 3rd world.