I am Monoculture, Destroyer of Worlds

There's an idea going around that "gentrification" imposes a monoculture on the neighborhoods it touches. In a whirlwind of destruction it sweeps away the indigenous diversity that existed since the dawn of time, tearing up unique old buildings, tossing aging deli owners as for away as Florida and scattering younger ones to the Five Towns. In its wake it leaves a sterile landscape of Vertical Suburbs, identical high-rises anchored by chains like 7-Eleven, the Gap and Trader Joe's! 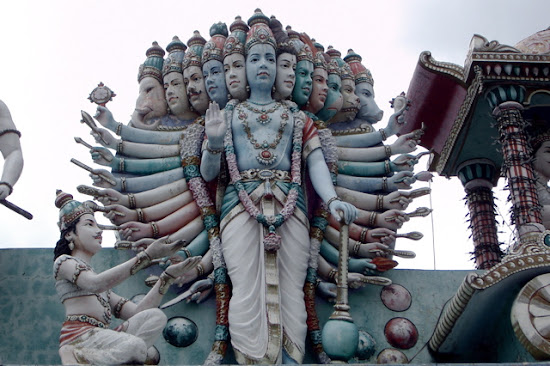 Photo: Steve Jurvetson / Flickr
What's that you say? The old buildings are recent and identical? They're already full of chain stores, clone restaurants and relatively newly arrived inhabitants, selling the same mass-produced stuff? The residents haven't moved out at a higher rate than any other time in the past fifty years? The new businesses aren't chains, and many of them sell handmade and secondhand items?

Well, it's still a monoculture! In a whirlwind of destruction it sweeps away the hopes of immigrants just beginning to put down roots with their first bodegas and Dunkin' Donuts franchises, swamping the old residents with hipsters from Ohio in identically unique flat caps and tattoos who produce a sterile landscape of coffee bars and vintage stores!

The great thing about this argument is that these elements can be combined in infinite ways to fit the situation. Any time there's a change you don't like, just highlight the diversity in the old and the similarity in the new. Bonus if you can sniff out any privilege the new people have over current residents!

Meanwhile, if you look at culture from a place of curiosity and not a place of fear, you find similarities and differences everywhere. Fads, formulas, common suppliers and the desire for a consistent customer experience are indeed forces that promote uniformity, but it is often a superficial uniformity. Uniformity is unsustainable, and the Second Law of Thermodynamics ensures that diversity always wins in the end. The Goths convert to Christianity, but then produce the Reformation. The Romans may have gotten the Iberians to speak Latin, but within a few centuries the Italians can't understand them any more.

When you get people from all over the country, and all over the world, coming together in one city or one neighborhood, of course you get some assimilation. But you also get a lot of continuity. A friend of mine is doing the artisanal hipster food thing, but she's actually using recipes and techniques passed on in her family for generations, knowledge that might have died out if she had taken a nice office job.

Yes, there is displacement, and it's not all good. There's a lot that we should be doing better. But we're not losing our diversity. The encroaching monoculture is a myth, a scary story that people tell their kids at bedtime. We're grown up now, and it's time to face facts. There is no monoculture.
Posted by Cap'n Transit at 12:40 AM

I disagree about your "laws of thermodynamics". Cultural diversity in an inclusive society and community is transient. Over time, with repeated daily contacts, cultures merge until a new culture and identity emerges, incorporating many features of the old. The only way to preserve "diversity" in the long run is to keep communities separate and reduce contacts to a minimum (for example, see the Jewish diaspora in the Middle Ages, where exclusion from Christian communities and institutions led Jewish communities to rally around their own institutions and their own neighborhoods).

All countries and communities that are called "monocultural" and "bland" were usually diverse in the past.

The biggest threat to cultural diversity right now is the internet, which has shifted people's focus into the "internet culture" and away from the culture of their own communities. Your historical examples were in situations where dominant societies (empires) receded, leaving previously integrated communities isolated from the earlier empire, so these communities then evolved differently, without close contact with other communities to keep them evolving together in a common culture.

Gentrification does create a more mixed community and breaks homogeneity, which should increase contacts between communities and therefore start a process of cultural convergence. It is a reasonable fear for people who want to cling to their cultural past and avoid their culture from evolving through integration. Whether that fear is rational or whether cultural change needs to be accepted/embraced however is up to one's values.

Thanks for your thoughts, Simon. I agree that isolation can produce differences, but I disagree that that is what happened in the examples I gave. In both of them, the "empire" (Rome, Christiandom) applied a superficial veneer to create an illusion of uniformity and integration. As those empires lost control, the veneer faded and differences reappeared.

I don't know which countries or communities you're thinking of that are called "monocultural" or "bland," but I've never seen a country or community that is monocultural or bland up close.

It is not true that rationality is up to one's values. Cultures evolve, there is no avoiding it. Expecting anything different is unreasonable and irrational. It may be understandable to fear change, or even to want to preserve certain aspects of a culture, but that has to be balanced against the very real needs of people for jobs, shelter and food. It is certainly wrong to assume that everyone wants their culture to stay the same forever and rejects migrants out of fear of being swamped by a "monoculture."