Could Lyft and Uber reduce congestion?

Charles Komanoff has created an open-source multimodal transportation model for New York City, available for free download as an Excel spreadsheet. In July, after learning that there were almost two thousand Uber cars on the streets of Manhattan every weekday, Komanoff used his Balanced Transportation Analyzer to estimate that these cars had slowed traffic by seven percent. 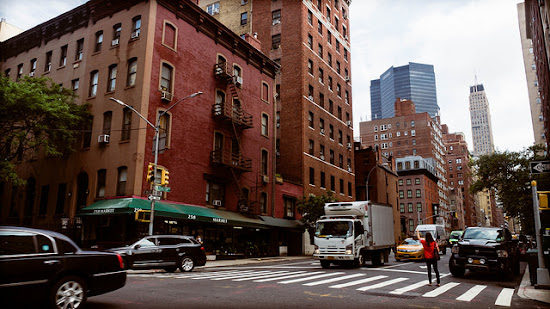 Photo: Jeffrey Zeldman / Flickr
A month later, some new information came out: taxis were sitting idle on the streets of Greenpoint. Drivers had found that they could make more money with Uber and Lyft than with the medallion giving them the right to pick up street-hailing passengers in Manhattan.

This suggests that instead of adding to the cabs in Manhattan, many of the Uber and Lyft cars have been replacing them. This is confirmed by an analysis conducted by Reuben Fischer-Baum and Carl Bialik for Five Thirty Eight. The net increase in congestion may be a lot lower than Komanoff estimated, especially since, as he mentioned, cabs hailed with apps don't have to cruise the streets.

I emailed Komanoff, and he was aware of this new data. "I revised my approach in mid-summer. I think the main change was a higher assumed displacement of yellows, which resulted in a lower impact of Ubers. The impact of 20,000 Ubers (not all of which are in the CBD all the time, obviously) is now a 4.3% slowdown in CBD speeds," he wrote.

To me this suggests that there is a limit to the number of taxis that we can add in Manhattan's Central Business District ("the CBD"). If vehicle speeds slow below a certain point, some passengers will decide that it's not worth their time and money, and either take the subway, go at a different time, or go somewhere else. The "surge pricing" (in fact, a form of congestion pricing, which Komanoff has advocated for all vehicles for decades) practiced by Uber and Lyft probably also serves as an extra disincentive.

If enough passengers make this decision, the driver doesn't get the hail. Because the fare they get for sitting in traffic is different from what they get while moving, they may decide that even if they pick someone up it won't be worth their time. And in fact, electronic hailing and traffic monitoring allows drivers to read and respond to these signals more quickly. A driver can now get a sense of the number of hails before they even enter Manhattan, and choose to go elsewhere.

The Economist's analysis of trip data suggests that these services are not adding very much to congestion: "During the two years to June 2015, Uber’s pickups in the CBD rose from an estimated 175,000 to 1.8m [per month], while yellow cabs’ hails in the area fell by around 1.4m. This implies that where Uber and yellow cabs compete most directly, just 13% of the growth in Uber rides has added to prior demand. The remaining 87% has replaced trips that would otherwise have gone to taxis."

It's even possible that electronically hailed cars could eventually help reduce congestion, and provide an alternative to subways and buses. Of course, not if they're single-passenger taxi trips: as I said recently, if Uber and Lyft simply take a vehicle with one person who's both driver and passenger and replaces it with a vehicle with one driver and one passenger, it may lead to a reduction in carnage and an improvement in the way people relate to each other, but there would be no net change in the number of passengers per car, and thus no practical change in efficiency or pollution.

There is one major difference in shifting from single-occupant vehicles to taxis: ownership of the vehicle passes from the individual (usually the driver/passenger), to the taxi driver or fleet owner. This means that control of the other passenger seats passes from the driver/passenger to the taxi service. As many people have observed, when combined with real-time schedule coordination, this makes it much easier to add passengers.

Uber offers an electronic carpooling service called Uberpool, and Lyft offers one called Lyftline. With these services, instead of carrying a single passenger, a Prius sedan can carry up to three comfortably, and an Escalade can carry five. The companies claim that they are very popular: Uber said that "almost 50,000 New Yorkers" used Uberpool in the last week of October. In April, Lyft said that Lyftlines made up thirty percent of its rides in New York. Unfortunately, both of those numbers are fairly useless for our purposes because they don't say how many of those rides were in Manhattan during business hours.

Still, each of those shared trips represents one of several possibilities. One is that the person took Uberpool or Lyftline instead of driving their own car or taking a separate cab. If these services do take, say, a thousand cars off the streets of Manhattan every rush hour this way - cars that are not replaced by other taxis, personal cars, or even trucks - that's a very good thing. Komanoff's model indicates that if we could get 32,000 less cars going into Manhattan every day, it would increase speeds by 3.2%.

It may be that the possible congestion limit I mentioned above is actually an optimal congestion point, and every car taken off the road by these carpool services will be replaced with another car, taxi or truck until it reaches that point. In that case, the only way to free up space on the roads would be to increase the price - tolls on the bridges, raise on-street parking rates, reduce government employee parking placards or implement a taxi congestion fee. In the meantime, at least this means more people that will be able to get into Manhattan.

Another possibility is that the person took Uberpool or Lyftline instead of taking the subway or bus, leaving space for someone else. A number of transit advocates have gotten all doom and gloom about this, saying that these services will "poach riders" from the public transit agencies, depriving them of fare revenue, but here in New York today the system is at capacity. All rush hour, people are watching full buses and subways pass them by. Poaching is simply not an issue, and will not be for the foreseeable future.

As I've written before, I do not believe that electronically hailed taxis can be a satisfactory replacement for fixed-route transit. I do believe that they can help us deal with our current capacity crunch, and potentially ease the way to eliminating personal cars. I've got more to say about this in the future.
Posted by Cap'n Transit at 11:51 PM

One big (okay, small, but maybe significant) difference that über or lyft could make is that the cost of each trip will be paid at the time. This foregrounding of cost will put some pressure on people to walk or bike or transit instead. I think this will make a difference. If you have a car, you tend to use it, since every trip seems "free".

I think that the Taxi industry is slowing down, but things like this just don't make the news with taxi cabs (see the article below). Even though I'm sure stuff like this happens all the time with taxis, you just don't hear about it and it seems like this stuff is happening more and more. If the media portrays Lyft and Uber as unsafe, then don't you think the major usage will slow down and we will revert back to riding taxis again? Seems to me like these could possibly a novelty - but that's just my thought

I disagree. You can linkbyour Uber account to your credit card and then just click to request and pay. People for cabs and MetroCard with credit card too or have MetroCard taken out of lay pre-tax. Tapping buttons on a screen is less real feeling than swiping a card, which is less real than counting out and forking over physical cash.