A lot of people are nervous about the possibility that privately-run electronic taxi-hailing systems like Uber and Lyft could take over functions that have recently been filled by government-run transit services. Others are disturbed by the sight of privately-run companies like Leap and Bridj marketing local bus services as luxury products. I share some of these concerns, and I've addressed them in previous posts. 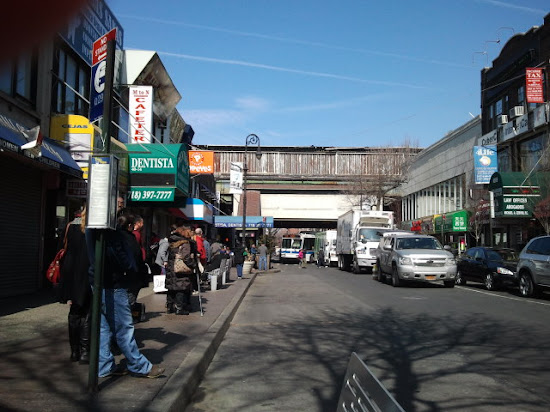 What I don't share is the idea that any of these services will create a "two tier" or "stratified" system with one service for the rich and one for the poor. There's a simple reason for this: we already have one.

If you go to a small city like, say, Lancaster, Pennsylvania, you'll see our stratified system in action: the people on the buses are mostly poor and nonwhite, and everyone else is driving. Ride the bus in a city like Kingston, New York, where the received wisdom is that "everyone drives because you need a car to get around," and you'll see that there are still people who don't drive: the extremely poor and the mentally and physically disabled. Here in New York the majority rides the subways, but there is a stratum that drives everywhere, and pretty much runs the city.

The bus and rail strata are largely run by the government and paid with tax money, but some of the money comes from fares paid by passengers. In the strata where people drive, passengers often contribute the labor of driving themselves, and pay a lot of money for the vehicles, fuel, insurance and other costs, and also contribute to the construction and maintenance of road, bridge and parking infrastructure through taxes. But as has been shown time and again, they do not pay the entire cost of the system; a much larger share of general tax revenue goes to driving than to transit.

This stratified system can be very cruel to those in the bottom strata, and it generally gets worse the smaller the share of the population that takes transit. The poorer the average transit user is, the slower, dirtier, more crowded, less frequent and less reliable the transit.

Even here in New York, the driving classes are constantly blocking improvements to transit, whether it's another commuter rail track, extension of an el train, allowing bus pickups or dedicating a bus lane. So yes, I know firsthand how bad it is to have a stratified system with minimal investment in the lowest strata. And I can't see how Uber, Lyft, Chariot and Bridj could possibly make things any worse.

In fact, I see it the opposite way: that people who take these taxi and premium bus services are less likely to identify as drivers and more likely to take transit and support transit expansion. If they don't have cars to park, they're much less likely to go crazy over reallocating street space from parking to transit.

As I've written before, I'm not a libertarian, and I'm not even much of a capitalist. One of my goals is access for all to jobs, housing, shopping and services. I would be open to a state solution, a government monopoly on transportation with a single level of service. But to impose a government monopoly on transportation would require drastic state action. Use your transit quota well, comrade! The government would most definitely be coming for your cars. Who would be first up against the wall - Rory Lancman?

In any case, I'm trying to think of an area where our government provides a monopoly with a single level of service, and coming up blank. Housing, food, energy, school - there is usually some government service, but it always has substantial competition from the private sector. Even services that are nominally single-tier like identification, permitting and licensing have inequalities. If you can afford to pay a rush fee or an expediter, or if you just live in a wealthier area, your interactions with the government will be quicker and smoother.

It's not just our government, either. The most revolutionary, egalitarian governments ever have failed pathetically at imposing transportation equality, when they've even tried it. Even the Soviet Union had its Ladas for the Party officials.

Sadly, these people who bleat about "stratification" don't even have the vision to realize the amount of stratification between cars and transit or the guts to mention it, much less address it. They would never think about taking away cars or parking, or defunding roads. They'd rather make a big show of opposing inequality that doesn't exist than address inequality that exists.

Olivia Chow and Jack Layton, which could be considered part of Toronto's urban liberal left, spent a good chunk of their political career without a car. Olivia Chow did rent a car with a chauffeur for the campaign trail during her most recent run for mayor but otherwise does not own one.

On the other hand Rob Ford whose positioned himself as a candidate for the blue collar working people of Toronto most certainly does own and use a car and rarely (if ever?) uses transit. His support base is in the suburban parts of Toronto, especially the working class ones. The current mayor John Tory I believe mostly takes the car, he's more like the establishment centrist candidate, probably similar to Bloomberg, with largely white-collar supporters living in the core and wealthier inner suburban neighbourhoods.

Agreed that an additional class tier to the transportation system isn't a problem. However, transit is at an unfair competitive disadvantage compared to jitney services, especially when fare structures are designed around principles of equity rather than profit. The main caveat I have before supporting jitneys is that this playing field needs to be leveled. Simply taxing a jitney ride at the maximum marginal revenue of a transit fare ensures that transit remains supported in its most important markets while allowing for the choice to use a jitney service.

I am not in favor of taxing jitney rides. The cheapest public transit systems in the US are useless. The better solution is to raise the fares and zero out the road subsidies. Then, people will determine when it is best to use their cars and the transit system will be market driven.

But we also need Jarrett Walker's Ridership/Coverage ratio spelled out. Most articles that show politicians supporting transit, they're solely or mostly supporting coverage. When has a politician said "better bus service" that it meant something other than coverage? Ferries are coverage as well. I haven't seen farebox recovery for SBS, but I hope it's ridership.

I agree with Joel. Fbfree, government transit is not supposed to be operating on a level playing field. It's a social service. If it costs too much to operate, tax the cars to pay for it, not the jitneys.

David, what do you mean? Some of the highest farebox recovery ratios are earned by ferry services. SBS also has high farebox recovery. In New York City, almost all the buses and trains and boats are packed these days.

@Capt. Agreed that the price for cars needs to be much larger, but both jitneys and cars need to be properly priced. The price for jitneys does not need to be very large, but there should be one to avoid cannibalization of service.

In any case, I'm trying to think of an area where our government provides a monopoly with a single level of service, and coming up blank.

Roads. Water and sewers. When you need support, welfare benefits. The charities nibble around the edges of that but there isn't an alternate to the government support.
...One of the major advantages of trains is that they aren't stuck in traffic on the roads.

Again, fbfree, I see "cannibalization" as a good thing. If the private sector can provide the service for cheaper than the government, it should. My only concern would be exploitation of workers, and that's where I see a role for regulation to ensure that minimum wage and other workplace laws are followed in spirit, not evaded through technicalities.

Cannibalization might be a good thing if a objectively better product were provided. However, there's no way a fleet of small vehicles with drivers is going to be cheaper to operate than a bus or subway of the same capacity. Some gaming has to be happening to make the less efficient private operator profitable.

Alternatively, if another company intends to run a bus service duplicating an existing bus, all transit users lose out due to split frequencies.

Thanks for the examples of water and sewers, Adirondacker. I can think of examples of inequality of service (sewers being cleaned more frequently in better-connected neighborhoods, and of course service across boundaries as in Flint), but in general when government provides it, it's pretty uniform.

Water and sewers are clear public goods, even more so than lighthouses, because when poor people have water contaminated with cholera, even the rich die.

The point of my post is that you can't consider roads by themselves.

And in fact, you could argue that bottled water and in-home/office filtration are the same kind of stealth stratification as private cars.

fbfree, your comments are full of loaded terms: "cannibalization," "gaming." The MTA isn't exploiting workers, but we have the other extreme: crazy union contracts that require the agency to pay multiple workers to do jobs that can be done by one and outrageous disability and retirement benefits.

Transit managers also tend to be very wary of trying new routes and schedules, because they know that they may be forced to maintain that service even if it turns out not to be cost-effective. Jitney operators have much more flexibility.

I honestly don't know what you mean by split frequency. Where there are two operators, there can be twice as many vehicles. Are you aware of the number of "pass-ups" we have every day in NYC?