As I said last year, what many people call "gentrification" in large American coastal cities is the result of the confluence of four or so different migrations. Cities have been drawing the Best and the Brightest and International Migrants for all of history, since the first trading post was set up where a trail crossed a river. They are not the main source of demand for urban real estate. Rents are rising because those two streams are joined by two other major streams, the Empty Nesters and the Small City Exiles. 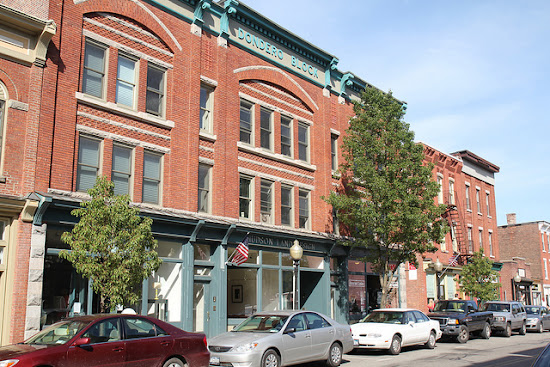 Beacon. Photo: Chung Chu / Flickr
The conformist Baby Boomers failed to make their utopia in the suburbs, and the back-to-the-landers failed to make their utopia in the country. Now they've got bad knees or bad eyesight or whatever, and if they care at all about any people, deer or trees on the road they'll do the right thing and buy a condo near their kids in the city where they can walk to shopping. Sucks if you wanted that apartment, twentysomethings.

Here's what I said about the Small City Exiles last year:

not the best or the brightest, or complete misfits, but they’re pretty bright, mildly kinky or noticeably nonconformist. Or maybe they can’t drive because they’re blind or epileptic, or they just don’t want to. Eighty years ago they’d have been pretty happy in Rochester or Knoxville or Omaha or San Luis Obispo: reasonably normal, functioning members of society, with enough peers to have a stimulating intellectual and artistic fellowship.

Today, those towns have hardly any jobs at all, especially within walking distance of downtown, shopping and services are sprawled out across the area, and transit between them is inconvenient. With this fragmentation, they can barely sustain a monthly open mike or an Indian restaurant, let alone a poetry slam or a regional Thai place. Our heroes – somewhat large fish in not-so-large ponds – see the grim desperation in the faces of their older neighbors and head to the bigger cities, where there are more opportunities, not just for jobs but for dinner after 8PM.

In that post, and in other recent posts, I've pointed out that the Empty Nesters and Small City Exiles don't need the big cities. They don't need a regional Thai restaurant. They were happy enough in the small cities, but there were no jobs and nowhere to walk. If we can fix those two problems they won't move to the big cities and drive up the prices.

If we make these small cities really attractive, many of the exiles will move back, and some will move to other small cities. What would it take? I'm not an expert on economic development, but I can think of a couple things that would help. First of all, they should be Strong Towns, keeping taxes low by focusing government spending on cost-effective, dense areas and avoiding spreading obligations out over huge distances.

It seems that a lot of our current economic growth is in high technology, and the places with most promise for tech are those that attract techie types, creative types and financial types (and people who are some combination) and allow them to mix and bounce ideas off each other. But I don't think you can declare a "Silicon Mangrove" in the middle of nowhere, upzone and automatically get tech jobs. It also seems that it helps for the city to be a physical port, connected to trade routes that make it easy for them to get materials and ship out products.

To my mind, the most promising small cities are those that are close to established centers like New York or San Francisco, so that staff members can spend a day in the city talking to potential collaborators and funders, and be home for dinner. Just as before the highway era, they can benefit from their proximity to the big port.

Some of these small cities are already coming back; you can tell because they're often called "the next Brooklyn." And where they are, people are already worried about displacement. It's important not to dismiss those displacement fears out of hand. Some towns have more vacancy than others. If rents are rising faster than wages, either the town should loosen zoning to allow more housing to be built in walkable areas, or we should work to boost opportunities in other towns.

Some people in those towns have expressed fear of their unique towns being swamped by a "monoculture," turning them all into clones of Brooklyn. I'm skeptical about these fears in general, but in small cities they're particularly unfounded. Beacon isn't Brooklyn, and neither is Rosendale; they've got way too much of their own personalities to become clones of Park Slope or Williamsburg. In particular, a lot of the people moving there are actually Small City Exiles who grew up in the area and tried to make it in the city.

I'll talk about what I think would help revive these cities in another post.
Posted by Cap'n Transit at 11:32 PM

Their location may be promising, but their leaders are still in the car-centric mindset. If they embrace downtown development, it is with massive parking lots attached to the buildings. So new residents just drive everywhere, lessening demand for retail downtown.

This is something I've been saying for years. Most of our once great American cities have been trashed by 70+ years of car culture and far flung, unwalkable suburban sprawl. So the handful of cities that can still offer a dense, walkable, non car dependent environment (see all the usual suspects: NYC, SF, Boston, DC, Philly, Chicago, etc, etc) simply can't accommodate all the people who want "in". And they never will - no matter how much new, "affordable" housing, no matter how much "infill" they try to build. We need a robust revival of all the moribund ghost towns out there: Detroit, St Louis, Cleveland, Kansas City, Buffalo, and, yes, all the lesser burgs too, Syracuse, Utica, Akron, just name your town.

Of course The Amateur Transporter rightfully point out that, any smart growth developments or initiatives in these second tier towns and cities will no doubt be vigorously opposed by the NIMBYs looking to preserve their car oriented, suburban life styles.

Successful universities or colleges can also form the core of a small city. Many of the older, more famous universities were located in these crazy, middle-of-nowhere places like Ithaca, NY or Brunswick, Maine. They provide the spark which allows the city to offer some amenities and some jobs.

By contrast, the small cities which were "company towns" have particularly severe problems when the company leaves.

In all cases, the "Strong Towns" principle of concentrating development on a sustainable footprint, rather than sprawling miles out in every direction, applies. And the principle that you need sidewalks also applies.

The small cities in the middle of nowhere *do* have a problem with being so far from big cities. In the old days, this was recognized; Ezra Cornell funded and built a passenger railway line specifically to connect Ithaca to New York City. Unfortunately, in more recent decades, people have forgotten how important this is, and allowed the rail lines to be ripped out. So another thing a small city needs is a rail link to a big city.