There are a lot of things that constrain what we can do to change transit. Ultimately, we can do very little by ourselves, so everything requires political and budgetary buy-in. The terrain and water are very hard to change. Then there are our goals for transit. Is transit always the best way to achieve access from point A to point B, or is it sometimes easier to move point A or point B? 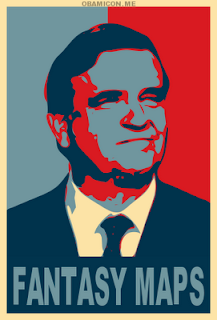 There are people who are talking about whether we should be moving where people live and work. For every new development in my neighborhood there's at least one NIMBY who brings up crowding on the 7 train as a reason to never build anything else again. People talk about developing secondary job centers in Newark, White Plains and Melville. When it's presented negatively as Someone Else's Problem it's stupid and nasty, but when it's presented thoughtfully and constructively it's promising.

Sometimes people talk about changing the terrain and water. These are the plans that are typically labeled as "visionary" by people with limited imaginations. Let's dig a tunnel under the Long Island Sound, build a deck over the Sunnyside Yards, fill in the East River. The spirit of innovation!

What we don't do enough of in New York is imagining what we could do with more money, more land or more political support. There are some great people making fantasy maps, but not enough. People are too ready to lecture each other about "political realities."

That's not to say that a low-budget solution isn't something to be proud of. When I read the proposal for a new Linden Boulevard station my only response was, "Why haven't we done this decades ago?" But we also need to think bigger.

Most importantly, we need to be willing to challenge political power for street space, for bus lanes and loading, and eventually for trolley tracks and stops. Any street that can fit a car lane can fit a dedicated bus lane; the only question is whether bus movement is a higher priority for us and for our government than car movement or storage.

Finally, we need to be open and honest, both with others and with ourselves, about what constraints we're challenging, and what we're holding steady. If we all work within a constraint and never mention it there's a danger that we'll stop seeing it, like fish in water.

I've been thinking about this in terms of two challenges that we're dealing with these days. There's the general problem that we've been successful in getting people to move to New York and ride the subway, but we haven't been making more subway fast enough, so we're all crowded into the subways we do have. Then there are the more specific issues about particular pieces of our transit infrastructure that will need to be taken offline and/or replaced in the next several years: the Fourteenth Street Tunnel, the North River Tunnels, the Port Authority Bus Terminal.

So let me ask you to think of these problems in two ways. First of all, forget about the budget. What if tomorrow, Anthony Foxx and Janet Yellen came to you and handed you a check for ten billion dollars that you can spend in the next five years. What would you in the short term to address specific challenges like the Fourteenth Street Tunnel and the general challenge of lack of capacity? How would you fulfill your goals by spending this on transit?

Second, let's bring back our budgetary constraints, but remove the constraints on land use. Imagine that you had complete control over the streets and highways and buses, backed by a Mayor and two Governors that everyone was unwilling to challenge. So you could put bus lanes absolutely anywhere you wanted them: on Main Street, on Thirty-Fourth Street, on Liberty Place, on Prospect Park West, over the Brooklyn Bridge. You do have a budget to buy as many buses as your plan requires. You can take any piece of land anywhere for bus terminals or garages. Nobody can stop you, there are no Community Advisory Councils, and the MTA has to implement whatever solution you come up with. Oh, and you can go to Jersey too, because you control the Port Authority, New Jersey Transit and NJDOT. What would you do with buses to fulfill your goals? Who would you enjoy telling to fuck off the most?
Posted by Cap'n Transit at 1:22 AM

Email ThisBlogThis!Share to TwitterShare to FacebookShare to Pinterest
Labels: plans, what if

The real problem is that $10 billion isn't enough. Based on the MTA's own recent budget estimates, half of that would complete only phase 2 of the Second Ave. Subway -- a project with significant miles of already-built tunnel. What would I do with the other $5 billion? Triboro RX or an extension of the 7 least east through Queens would get some funding for starters.

I would remove station parking, minimum parking requirements within 1/2 mile of every subway, regional rail, and major trunk bus routes. Demand for better transit would solve for everything else.

Fill in the East River between Navy Street and Wards Island.

What other intervention would have such positive benefits?