The majestic equality of subway gropers

In February Emma Fitzsimmons reported on a recent rise in crimes against women on the subways. On Wednesday, in a thoughtful guest post for Second Avenue Sagas, Sarah Kaufman summarized an important point in Fitzsimmons's article: "Women are also the predominant victims of subway-based crimes, specifically robbery, forcible touching (340 cases reported in 2015), public lewdness (223 cases) and sexual abuse (130 cases)." 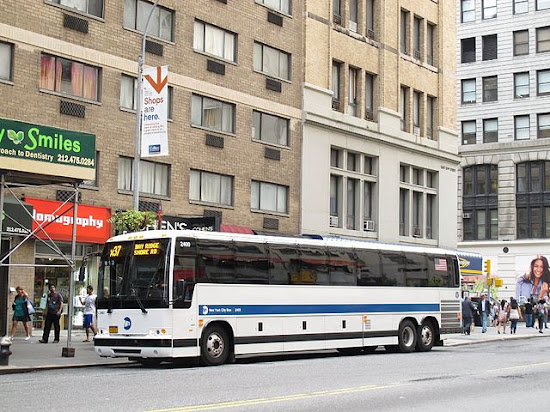 Photo: AEMoreira042281 / Wikimedia
Kaufman continues, "When possible, women prefer another, safer mode, rather than waiting in desolate subway stations or at dimly-lit bus stops. Depending on their economic well-being, women may opt for dollar vans, taxis, livery cabs, Citi Bikes, Lyfts, Vias or Ubers. Women outnumber men in the relatively inexpensive dollar vans (ridership is 63% female, according to Eric Goldwyn), but use taxis less frequently than men do (34% female) and are vastly underrepresented on the comparatively costly Citi Bike (24% of rides are taken by women)."

This may be increasing, but it is not particularly new. In 2013 Kimberly Matus talked about her experience being groped on the subway. In 2009 I remarked that many of the riders on express buses are women, particularly older women who are probably commuting to clerical or managerial jobs. Years ago a middle-aged female friend of mine said that she even preferred the local buses of Manhattan to the subway.

The connection that Kaufman draws between transit and Citibike is insightful. People have criticized the gender imbalance in urban cycling generally, and in particular in the "vehicular cycling" movement, which in its majestic equality, encourages men as well as women to mix with speeding traffic protected only by a light helmet. Citibike is a bit safer, being rolled out only after the installation of protected bike lanes on some Midtown avenues, but the numbers suggest that women feel much less safe.

As with vehicular cycling, there is a movement within transit advocacy that disdains all comfort, and quite a bit of safety, in pursuit of a sort of Spartan equality. They have no power to increase transit funding, but they insist on low fares, resulting in crowded, unreliable subways and buses. All conditions on transit must be completely equal; as the reactions to San Francisco's Leap bus showed, any difference in comfort or convenience is worse than offensive, it is ridiculous. And yet private cars, and the public infrastructure we built to serve them, can be as comfortable or convenient as possible because it is completely off the radar for this movement.

These transit advocates, in their majestic equality, encourage men as well as women to pack into subway cars with thieves and sexual predators, shout down any other options, and somehow seem puzzled when these women buy cars at the first opportunity. Hm.
Posted by Cap'n Transit at 1:11 AM

Your article dovetails into an argument about the proper treatment of "private transit" - vans and buses that carry a good number of passengers, but not operated by a government agency. You are right that these private entities should be supported and not ostracized. These include Leap, employment shuttles like you see in San Francisco, and for long distance travel Chinatown buses and Megabus, and even some luxury services like Hampton Jitney. They may not cater to the public at large, but they are all a piece of the puzzle to making life in a big city possible without owning your own car. IMO, most of these services should be allowed to use bus only lanes in the city as they do a good job of moving people and provide additional service in the transit market.

Yes, that's pretty much where I'm going with this, MRS-MAN!

I thought so. There are arguments to be made that certain preferences on the public street (bus-only lanes, turn restrictions that do not apply to buses, toll discounts for high occupancy, free parking for high occupancy, curb space for pickups) should apply only to public transit buses. And there are also arguments that these amenities should be opened up in some circumstances to private buses, jitneys, taxis, and even bicycles.

Chicago's new Loop Link, to reserve a lane along streets to connect Union Station to Michigan Avenue is limited to specific transit buses, even though there are many employee shuttles that illegally take the route and may better serve the commuter rail customer who do not want to take regular transit buses.

Perhaps the best thing to do is what Docklands Light Rail does. They don't have drivers, but they do have security guards on every train.