Okay, BRT is a collection of bus improvements, right? I can see why you'd want to pacakage your bus improvements together, if (a) you're building a whole new system and can't afford subways, or if (b) buses have such an image problem and you need to convince opinion leaders that no, this bus is full of people like you, not old and retarded people.

The main point I want to make in this post is that buses can be made "rapid" for a short length of their route, speeding up commutes and adding capacity, even if the rapid section isn't long enough to justify calling the entire route "BRT." In fact, the rapid section can be shared by many bus routes.

It's well-known that the biggest transportation bottlenecks in the region are at the river crossings. This leads us right to one of my favorite charts of all time, courtesy of the Federal Highway Administration: 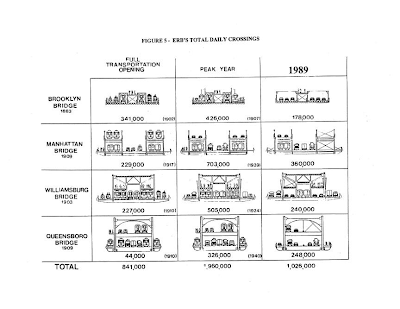 That graph is a bit out of date; this data from nycroads.com shows recent annual average daily traffic figures. The table below is the number of vehicles; You need to multiply it by a certain number, and add subway trips for the Manhattan and Williamsburg Bridges, to get the total number of people.

The graph and table show that the capacity of the four city-owned East River bridges actually declined from a peak early in the century. Why? Because the city actually removed seventeen tracks from the bridges to make room for car lanes.

To be fair, there were actually eighteen tracks (in subway tunnels with higher capacity) added as these tracks were being removed, resulting in a net gain in capacity. If you add in the four tunnels leading into Penn Station, that's even more. These tunnels led to a significant short-term drop in ridership for the private companies operating trains and trolleys over the bridges (and ferry operators as well) and many of them went out of business or abandoned some of their tracks. The city government, believing cars to be the transportation of the future, turned the rights-of-way over to them rather than railbanking them for companies that might come one day.

Well, the time for cars has come and gone, and now we need that capacity back. We don't have the money to build new subways or elevated trains to connect to these bridges, but we can run more buses (and maybe eventually trolleys again) over the bridges.

The Lincoln Tunnel Exclusive Bus Lane (PDF) is one of the best demonstrations of bus capacity outperforming private cars. This single lane carries 62,000 passengers from 6:15 to 10:00 AM every weekday, in more than 1,700 buses, from the Turnpike Interchange through the Lincoln Tunnel to the Port Authority Bus Terminal. In other words, over the course of three hours and 45 minutes this single lane transports about as many people as the four-lane Brooklyn-Battery Tunnel does in 24 hours. It's currently at capacity, and the Port Authority is looking at ways to expand it.

What if we had an XBL on every major bridge and tunnel? We could take all the buses that pass nearby and feed them through it, bringing people into Manhattan where they can get to jobs easier. This would be a form of BRT, even if it doesn't have fancy brands or fake subway stations. I would argue that it would be much more effective than implementing BRT over long routes. This is not a criticism of the DOT or the MTA, because they're actually doing this - or talking about it.

I'll write a few posts about the various bridges and tunnels involved, and what the plans are to increase bus capacity.

In response to an earlier BRT post, Alon Levy commented that "the XBL works only because it feeds directly into a gigantic terminal." So I'll also talk about what can be done to speed the buses once they get across the bridges and tunnels, too.
Posted by Cap'n Transit at 12:44 AM

Amen. DOT should focus on bus improvements for the worst areas, including areas like "The Hub" at the terminus of the 2 in Brooklyn, The other "Hub" in the South Bronx, as well as Jamaica Center, downtown Brooklyn (ok, they're not too bad with Fulton St), and of course the river crossings.

Like Paris, NYC doesn't need branding. It just needs quality, and focused improvements, since it sure as hell isn't getting parisian style improvements anytime soon.

By far the best part of this would be reducing the car carrying capacity of these bridges and tunnels. That being said, I'm a bit concerned about what removing that traffic would do to the MTA on the tunnels. Their fiscal situation is bad enough as it. I think the answer to this though is if the ERB could be sold to the MTA...

It's a good point, Chris, but as far as I know there's still available capacity on the MTA bridges and tunnels, particularly the tunnels. As long as there's a clear approach, it should be possible to add a lot more buses without discouraging cars from using the tunnels.

That said, the MTA has multiple revenue streams. While it's competing with the "free" roads and bridges we can't expect it to balance its budget on tolls and fares alone and still run a decent transit system. The revenue from the mortgage recovery tax is going down. None of this will work unless we've got a government that is willing to subsidize transit at least as much as private cars, and make up any lost toll revenue.

Here is an updated chart, based on the NYMTC's Hub Bound Travel data (which includes people using the bridges by transit, auto, and bike).

Also note that the pictures in the chart exaggerate somewhat the transit options available on the bridges in their "peak" years. The only trolley services on the Queensboro Bridge and the south side of the Williamsburg Bridge during their respective peak years were shuttles running between terminals at either end (though as of 1924 the north side of the Williamsburg Bridge did host trolleys from the Brooklyn end of the bridge to the Desbrosses St ferry and to Park Row). Furthermore the subway tracks on the south side of the Manhattan Bridge were used only during rush hours until the Chrystie St connection opened in 1967. The Williamsburg and Manhattan bridges are thus more useful today than they were in their busiest years, but still their usage is far below peak, and their subway tracks below capacity; this seems to have more to do with the availability of alternatives than with any decrease in capacity on the bridges themselves.

On another note, you grant Alon's point about the importance of the PABT to the Lincoln Tunnel XBL's success, but then in your subsequent posts about "xRT" propose routing the buses onto surface streets full of stoplights, pedestrians, bikes, turning and loading vehicles, etc, where "rapid" speeds would be neither safe nor feasible, and where a stream of 500+ buses per hour (as pass through the XBL at peak) would lead to instant gridlock. A bus lane is in no way a substitute for a "gigantic terminal"; neither are tiny legacy facilities with barely enough room for a single bus to turn around. It is worth considering ideas like a Red Hook trolley across the Brooklyn Bridge, or Northern Blvd SBS across the Queensboro, but we should be realistic that such projects could not approach the capacity of the XBL (without devoting a block and a half to a new PABT).

Thanks for that image, threestationsquare! You're right that when I wrote this post, I think I wasn't quite aware of the implications of Alon's astute observations. But even back in May 2008, when this post was written, I was thinking about street and terminal capacity, and through-running.