Faster, more reliable buses to Connecticut and beyond

In the comments to the original Design New Haven post about wanting better bus service, some folks mentioned that the New York-Hartford Megabus run was unreliable and took a long time. This was also mentioned by several commenters on the corresponding SeeClickFix issue, and there seems to be a consensus that buses from New York to Connecticut and points beyond (a) take longer than they should and (b) can sometimes take a lot longer. Everyone knows why: they get stuck in traffic on New York City streets.

As I've written before, the enduring profitability of the west-of-Hudson routes is due in large part to the Lincoln Tunnel Exclusive Bus Lane, which has been making bus commuting competitive with cars since 1970. Although the Port Authority has dragged their heels on the long-overdue expansion of the XBL, which has been at capacity since the late 1980s, they have continued to operate the lane.

Another factor is the huge number of general-purpose lanes feeding into the tunnel approach, which allow the buses to move relatively smoothly even where they don't have a dedicated facility.

If you go to the Port Authority and get on a bus to Montclair or Newburgh, your bus will go right out of the terminal and into the tunnel, with at most two blocks of street shared with private cars. By the time you're on the Turnpike or Route 3, traffic is usually flowing pretty smoothly for everyone. Relatively little of the route is on the general-purpose streets with frequent bus stops that put buses at such a disadvantage.

Now if you get on a bus to Hartford or Providence, your bus might go right out of the terminal and onto Tenth Avenue. There's no bus lane on Tenth Avenue, so you're mixed right in with the cars and trucks, and if traffic is bad, you're stuck in it too. If a light turns red, you sit there, and if someone blocks the box, you could be sitting there for a long time. So it goes up Tenth Avenue and Amsterdam Avenue. At some point the bus crosses to the East Side and gets on the Bruckner Expressway. There are no traffic lights on the Bruckner or the New England Thruway, but sometimes car traffic can get congested. The Bruckner has no bus lane, not even an HOV lane, which means that any bus is going to be slower than a corresponding car trip. Getting back is similar, except you're going down Ninth instead of up Tenth.

Because of this, some bus operators will actually use the XBL even for trips to Connecticut. That's right, they will go west, through New Jersey, up the New Jersey Turnpike and across the George Washington Bridge to the Major Deegan Expressway, and from there to the relatively less-congested Interstate 287 to 684 to 84. According to Google Maps, that adds about fifteen miles to the trip, but you know they've figured out that it's a more reliable - and often faster - route.

So why do we care if the buses are slow and unreliable? There's train service; shouldn't we put our government dollars into making that better? Well, maybe not; the old New Haven mainline is pretty much at capacity right now, and it's clearly not serving all the people who currently drive on these highways. Many people want a one-seat ride to a place that's not on the train, like Stockbridge or Northampton. Others want a level of comfort that they can't get on Metro-North, but maybe aren't willing to pay Acela rates. Some, as has been said before, want wifi, power outlets and a place to stow their bicycles.

That's why buses heading to the north and east need their own XBL, where they can be free from intersections and car traffic until they get to less congested highways. Ideally, this would be highway all the way. Why don't these buses take the LIE to the Whitestone Bridge? Well, thinking back to the few times I've attempted to drive the LIE at any time near rush hour, it was a lot slower than the Turnpike. The short morning rush HOV lane doesn't seem to be enough. If we had a bi-directional, 24/7 dedicated busway from the Midtown Tunnel to the Van Wyck Expressway, you know those buses would be flying out to Connecticut.

The LIE is a touchy subject with some people, so it wouldn't surprise me if it were difficult to get that bus lane approved. A less ambitious plan would put bus lanes on Ninth and Tenth Avenues (and Amsterdam and Columbus), similar to the ones on Fifth and Madison for the East Side. Don't West Siders - and Riverdale residents - deserve as much? 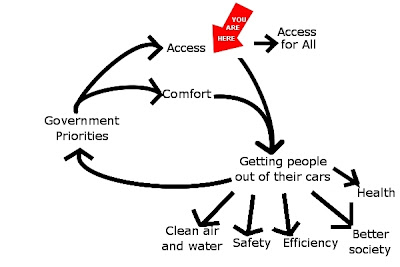 Put bus lanes on the West Side Highway or Henry Hudson Parkway, whatever it's called, from the Port Authority Bus Terminal right up to the George Washington Bridge to Jersey and onto the Cross Bronx Expressway heading east.

Some of the parkways were designed to keep the riffraff -- that's us bus riders -- off these carriage ways by making the overpasses too low and the underpassings unpassable. But I don't think the Henry Hudson suffers from that design feature.

Moving the bus traffic off Amsterdam and Columbus would be a large step to making the Heights and the Upper West Side less congested, polluted with stink and noise, and less dangerous for the residents. Buses would not hurt Riverside Park much because the current traffic on the Parkway has already destroyed any peace and quiet near it.

You know, you're right, Woody. The first low bridge on the Henry Hudson seems to be at 232nd Street. Not sure about on or off ramps.