Today, Streetsblog.net featured a post that relates to what I've been writing recently about the Magic Formula for Profitable Transit. The post is by Ann Arbor transportation promoter Nancy Shore, on the Get Downtown Blog. Shore discusses incentives to use transit, employing the "carrot and stick" metaphor. She's particularly insightful in this comment:

We have a huge carrot known as the go!pass, that gives employees unlimited rides on the buses, including to park and ride lots in addition to other incentives. But those carrots only work if there isn’t also a chocolate cupcake (such as employer paid parking) on the plate.

Let me refine Shore's metaphor for a minute, to make it even more apt. The "carrot and stick" metaphor is actually from the field of transportation, discussing the best way to get a donkey to move a load. You can put a carrot in front of it, and it will move forward to get the carrot, or you can hit it with a stick and it'll go forward to try to get away from you. 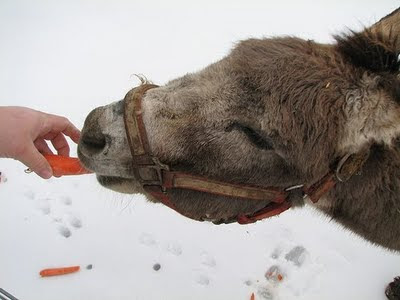 In fact, your Cap'n has actually had the privilege of traveling by donkey cart, and let me tell you, it was all stick. There were no carrots or other positive incentives in sight. But my experience is just one data point, so let's assume that it's not completely representative and that sometimes it's possible to motivate a donkey with rewards.

Imagine that you're getting downtown in your donkey cart, and you get stuck in the mud. You walk around in front of the donkey and hold out a carrot, and lo and behold, she starts moving forward. But then a thief comes along and offers the donkey a sugar lump. Although it's well-documented that donkeys like carrots, I've been told that they like sugar lumps even better. All of a sudden, the donkey starts following the thief as he backs away. And she's pulling your cart with its load of plasma televisions and Kindle DXes away from downtown, towards the office park!

For whatever reason, Shore seemed to end her article as though removing the free parking passes were a stick, instead of simply chasing away the thief with the sugarlumps. And really, that's what entitlement is, right? You get so used to the reward that when it's taken away it feels like a punishment.

So now let's get away from the culture of entitlement for a little while, and travel with Dave Olsen to the town of Hasselt in Belgium, where the buses have been fare-free since 1997. The crux of Olsen's argument is here:

Hasselt City Council's principal aim in introducing free public transport was to promote the new bus system to such a degree that it would catch on and become the natural option for getting around. And it did -- immediately. On the first day, bus ridership increased 783 per cent! The first full year of free-fare transit saw an increase of 900 per cent over the previous year; by 2001, the increase was up to 1,223 per cent and ridership continues to go up every day.

Olsen's entire article is definitely worth reading, because he makes it clear that the planners and government officials really did an amazing job in this town. But critically, they didn't just make transit free. Olsen kind of slips this one in there:

The "Green Boulevard," formerly the inner ring road, was a traffic nightmare in the 1960s. Starting in 1997 and finishing in 2000, it has been transformed into a multi-use transportation dream: a nine-metre wide pedestrian area (Vancouver's standard sidewalk width is less than two metres), separate bike paths, separate lanes for transit, and roads that are engineered to ensure that cars drive at a maximum of 30 kilometres an hour. Although there are only two lanes for cars, there is rarely any congestion. 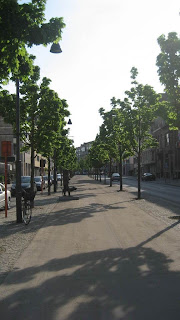 Okay, now wait a minute. They took a congested four-lane ring road and turned it into a two-lane, traffic-calmed street with a parallel greenway and separate lanes for transit. And you're telling me that this had nothing to do with the way that people flocked to transit?

It looks like the people of Hasselt followed at least part of our Magic Formula for Transit Profitability:

1. Give transit its own right-of-way and good terminals
2. Make it hard to use cars
3. Make it expensive to use cars
4. Profit!

More details of the Groene Boulevard can be found in this PDF report from Sust. I actually haven't been able to find pictures of this transit right-of-way, or any sign of road pricing, but they have clearly made it harder to drive in the town. They even made drivers travel in a loop, and we know that very few people actually want to travel in circles! Since Hasselt, like Curitiba, seems to be a popular destination on the Bus Boosters' World Tour, some of our readers may have been there; please fill us in.

What seems to have been the deciding factor is that the people of the area created a consensus Mobility Plan together, and seem to have really taken ownership of it; Olsen writes, "Now, people in Hasselt often speak of "their" bus system, and with good reason." The Sust report confirms this: "The stimulus for such a radical approach was multi-faceted: the city centre population had declined significantly over time, which lead to reduced levels of activity within the area. In addition, there was also a high rate of traffic accidents within the central boundary. These were some of the facts that indicated that city was in decline and needed a new focus and direction. Against this backdrop, the decision was taken to revitalise Hasselt by redefining mobility and the supporting infrastructure, making it more sustainable."

Apparently that's what it takes to turn a stick into a carrot: a shared sense of responsibility that outweighs feelings of entitlement. Not likely while the city looks to "leaders" like Bill Thompson and Pedro Espada.

Hey Cap'n
Great insights on your post! Thanks for taking my little thought trail and expanding on it.

One good government response to the "cupcake" would be to tax parking at 100%, so that firms, including the one under discussion, would have to double their expenditures to maintain the same benefit. Or they could tax parking benefits at 200%, so that firms would find it cheaper to give out the cash, which the park-and-ride commuters could use for transit instead.

Or maybe cities could just drop requirements for businesses to provide parking for their customers. Most businesses don't want to pay for parking anyway, so parking would be dropped pretty quickly.

And it wouldn't cost anything.

@ Jonathon ... Federal government policy provides a tax concession for parking (as a business expense), and its been a long, not as yet fully successful fight to provide a level playing field in the tax concession for other modes of transport.

While a local municipality might tax parking spaces, that's a bit of driving with one foot on the gas and the other on the brake.

If the tax treatment was reversed and it was treated as a taxable benefit, and at-large employee parking taxed for all employees unless it could be shown which were not receiving the benefit, that would substantially boost interest in paving the walk to the bus stop and getting a more useful shelter, establishing a discounted transport ticket program, getting bike lockers and showers, and etc. ... all of a sudden all actually lower full economic cost ways of supporting employee commuting would receive the support of the bean counter department.

@Bruce, most definitely! But I disagree with your brake-accelerator metaphor. New York City has a parking tax and that seems to work perfectly well despite the federal tax break on employee parking.

Someone should make a master list of all the 'boulders' that need shoulders put to them: Eliminating federal roads and parking subsidies, instituting congestion pricing, tolling bridge choke-points, etc.