Following the comments on SeeClickFix is a little difficult because of all the repetitive "Another person wants this fixed!" auto-comments. But in among those on the New Haven BoltBus issue (discussed here previously) are a few interesting news items. User Mark points to a Yale Daily News squib that reports that TransportAzumah CEO Joel Azumah has taken interest in the market. "Azumah said he is currently drafting a tentative schedule for the service to show the New Haven community, adding that if feedback is good, the line should run in time for Thanksgiving break."

Some readers will remember TransportAzumah as one of the more entrepreneurial bus operators in the New York area. It was Azumah who stepped in when Coachusa dropped the 144 route from Staten Island to Jersey City in 2007. He was rewarded for this by seeing the MTA run competing service; watch this video for Azumah's take on the events, plus a jaw-dropping quote from now-Congressman McMahon.

If the New Haven riders are looking for Boltbus comforts on the cheap, they probably won't get leather seats from Azumah. On the Staten Island run, customers complained that the buses were old and not very well-maintained - particularly regarding the bathroom plumbing. Azumah also has a relatively small fleet and contracts out with other operators for any additional buses he needs; consequently he has less control over the amenities on the ride. But it's clear that if he had had more than six months before he had to compete against subsidized service, he would probably have been able to take care of some of those issues.

Azumah is young, techno-savvy, and a regular contributor to various online transit forums around the New York area (like BusChat). I'm sure he understands the value - and potential draw - of onboard wifi. I'm guessing by his name that he has probably also been to Ghana and seen how for-profit transit operators act in a true free market. He has released a detailed proposal for express bus service from Long Island, and I think he may also be the author of this one for restoring competition to NYC buses. He might be able to set up the Boltbus-style dynamic ticketing scheme that the New Haven residents like so much. His entry into the New Haven discussion - and his potential entry into the market - could really bring a lot. 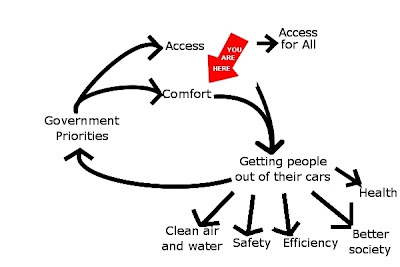 Usually there aren't too many "I want this fixed" comments - I think that typically they help users track when an issue gets hot.

This SeeClickFix thread is unusual in that 250-odd people have voted that they want the problem fixed.