From Staten Island to 34th Street

Commenter and occasional contributor George K has pointed out something that the Department of Transportation's bus planners seem to have missed: it's not just Manhattan and Queens. Thousands of commuters from Staten Island also ride buses that use the 34th Street bus lanes.


The total ridership for all branches of the X17 was 5680; I estimated that one third of that is the X17J. Atlantic Express did not publish any ridership figures like the MTA, but their 2006 filing in the National Transit Database (PDF) lists 693,076 unlinked trips for the year. George suggests that the X30, which brings 840 people to 42nd Street, could also use 34th Street, bringing the total number of trips to 7,202. 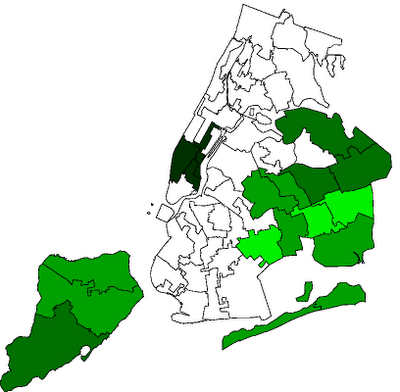 That means that Councilmember Ignizio from the South Shore has 2,846 34th Street bus trips from his district, almost as many as Dan Halloran does. Mitchell from the North Shore has 1,830, slightly less than Ulrich, and Oddo from the center has 1,682, a few more than Crowley. The grand total is over 42,200 bus trips using the bus lanes every day.

I've heard that some people in Queens are starting to contact their City Council members. If we can get the Staten Island delegation on board, it will be that much more of the city in favor of this project.
Posted by Cap'n Transit at 12:42 AM