The other users of the 34th Street Transitway

If you've seen television reports, newspaper columns and blog posts about the City's plans to provide physically separated bus lanes on 34th Street, you might be forgiven for thinking that this was some arbitrary exercise with empty buses, with the entire goal being to deprive car-dependent residents of Murray Hill of their right to be picked up and dropped off in front of their buildings - or worse, to let them try to pick up or drop off someone and then - gotcha! revenue generation!

If you read pro-transit blogs and tweets, you would know that the buses contain thousands of bus riders: about 33,000 trips per day. Apparently there has been some representation of these riders by the Straphangers Campaign, but the meetings seem to be completely dominated by people who identify as either drivers or taxi riders.

Other than the Department of Transportation staff themselves, no one has acknowledged that the majority of these riders don't even live in Manhattan. There are more than twenty express bus routes from central and eastern Queens, and a little bit of southern Brooklyn, that bring thousands of riders into Midtown every day. They travel down the Long Island Expressway through the Queens-Midtown Tunnel, west on 34th Street, north on Third or Sixth Avenue, east on 57th Street, back across the Queensboro Bridge, and down Queens Boulevard. Here are figures from the 2009 ridership data released by the MTA:

There have been at least five meetings about this project in Midtown Manhattan, but to my knowledge there have been no meetings in Queens. There is a Community Advisory Committee for the project, but are there any representatives from Fresh Meadows or Bayside? I certainly haven't heard from them in the news, the blogs or the Twitter feeds.

It's true that this is a pretty good case of a situation with concentrated costs and diffuse benefits, and these often get hijacked by the people who perceive themselves as having something to lose. While it may be no big surprise that Steve "real New Yorkers don't like pedestrian plazas" Cuozzo and Debra "Alt Side" Alfarone don't bother to get the bus passengers' perspective, it would be nice if Jill Colvin and Noah Kazis could at least find one person from Queens willing to talk about it.

The DOT is in a weird situation: they're supposed to be serving the public, and in this case I think they are. But if everything they hear from "the public" is anti-transitway, they're going to be hard pressed to continue the project. It seems reasonable to me that they would reach out to Queens bus passengers, but as far as I know they haven't.

As far as I know, we have also heard nothing from the City Council members who represent these riders. Here they are, roughly:


The numbers fall into four nice groups: Manhattan with almost 6,000 trips per district; Northeast Queens with 3-4,000 trips; Central Queens and the Rockaways with 1,000-2,000 trips, and Southeast Queens and James Barron's district in Brooklyn with less than a thousand trips each. 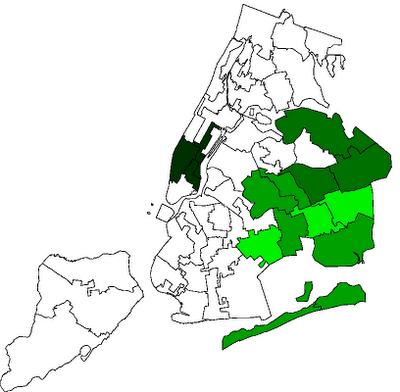 It would be nice to see more participation from people representing express bus riders, particularly from Gennaro, Weprin and Halloran. A few letters probably wouldn't hurt. And I'll give a tip to anyone interested in organizing the bus riders: after sitting in clogged traffic on 34th Street, they're usually pretty annoyed with the deal. Transportation Alternatives and the Straphangers Campaign could probably get a whole bunch of supporters signed on just by handing out leaflets at the bus stops in Manhattan.
Posted by Cap'n Transit at 12:33 AM

I heard somewhere that express buses and "Not in Service" buses aren't allowed in the present-day bus lanes. Is that true?

No, George, not in New York. But private buses, a.k.a. "dollar vans," are not allowed.

1. How many of those 18,000 riders on the Queens buses actually travel on 34th? I'm not trolling - I'm genuinely interested in the breakdown of intra-Queens versus Queens-34th travel.

2. For Queens-Manhattan riders using 34th, what percentage of the travel time would be saved by the Transitway, versus, say, designating bus-only lanes on QB and Union Turnpike?

Good questions! In my experience, it's very rare (as in, I've only seen it once and it was me doing it) for someone to get off in Queens on an inbound trip.

The stops are clearly arranged to discourage inter-borough trips. For example, the last stop in Queens for the QM1/5/6/7/8 is at Main Street, almost a mile from the Kew Gardens subway station. I'm not saying this is a good thing.

I've never taken these buses during rush hour, so I don't know how much they get stuck in which places. Outside of rush hour, the bus definitely moves slowest between the Tunnel and Sixth Avenue. The tunnel exit is actually a big bottleneck, where the express buses get stuck behind tons of cars turning onto 34th Street and merging with other cars from the east side.

To clarify my answer to George, express buses are allowed in bus lanes. I don't know abut "not in service" buses.

I do not think the 34 Street Transitway is a good idea. Why? The city isn't very good at moving traffic on 36 and 37 Street. Perhaps if they actually put traffic agents to move traffic on the through streets (gasp!), it would be better.

I am leery of schemes that simply divert road space from cars. You will be surprised about the level of trip chaining that is done with cars. This is why I like the higher parking meter fees in Manhattan. Manhattan also has very few corridors to move bypass traffic properly. The Cross-Bronx Expressway is a black hole, so the GWB is typically not viable.

According to the DOT answers at this week's 34th St. CAC meeting, the bus lanes are (by current law) open to any bus. That includes express buses, Bolt/Megabus, school bus, etc. I am sure that also means not-in-service buses.

Is there going to be a clear bus-only path from the tunnel to 34th? Is it even possible to build such a path without a bus lane in the tunnel, which would be great but will happen when hell freezes over?

Alon, I think you're underestimating the level of magical thinking on the part of the bus planners at DOT. Far be it from them to actually take an existing bus and observe the chokepoints. No, they'll go to Curitiba or Bogota and implement everything that the budget and politics will allow.

@Alon Levy: All of those express buses that use 34th Street are meant solely for travel between Queens and Manhattan, so there is no-intra Queens travel allowed.

@Cap'n Transit: The reason why the buses are set up in such a way that intra-Queens travel is difficult is because that isn't their purpose: Their purpose is to bring passengers to Manhattan.

Also, in addition to the Queens routes, there are Staten Island routes that run via the NJ Turnpike and use 34th Street that weren't included. (the X17J, X22, X23, X24, and X30). The X31 runs via West Street and then goes on to 34th Street.

It's very bad practice to separate buses like that. It would be like having separate trains for local travel and interborough travel. Best practice, which the MTA has no intention of following, is,

3. All routes use proof-of-payment, with none of the nonsense about the bus sitting still for inspections. People who need to swipe to pay board at the front; people with valid transfers or unlimited cards board through any door, preferably not the front one.

The reason that there are seperate buses for local/interborough travel is that the interborough buses are much more costly to operate. They also have more anemities (soft cloth seats rather than hard plastic seats) and because of the higher price, riders can avoid the "riff-raff" that ride the local buses and subways.
I believe Cap'n Transit wrote a post about people who are "too old for this shit", which describes services like commuter rail and express buses.

The interborough buses are more costly to operate precisely because the MTA insists on keeping two fleets, two bus companies, and so on. If the subway were split into two incompatible systems, one local and one express, the operating costs of the express system might be higher, too.

That is part of the reason. The other part, though, is the fact that the local buses feed people to the subway, which has a very high capacity and moves very quickly (costing less per passenger), whereas the express buses have a lower capacity and travel slower than the subway, even on a highway.

Also, I really think you should read the post I mentioned before.

The north-south Manhattan buses are part of the local fleet, but are not subway feeders. The M15 doesn't intersect the subway north of 14th Street. It's still a very efficient route, with fares covering the avoidable operating costs or coming close to it.

I think I've read the post you're referring to, and all I can say is that it deeply depends on service levels. S-Bahn services throughout the Germanosphere get ridership from all social classes, without strict segregation from inner-urban transit. As a result of their greater efficiencies, they cost on the order of $3 per rider to operate, rather than $10.

See the comments to see what I am referring to.

Yeah, that's what I was thinking of. This attitude exists because of the perception that cars are better and transit sucks. Make local transit work better and people of all social classes and ages will not mind taking the subway or the local buses. SEPTA for one gained ridership when it made regional rail work a little more like rapid transit - the riff-raff factor was outweighed by the "I can get to more than the railroad depot" and "the trains have half-hourly off-peak service" factors.

Cap'n: Can you revise the post to include Staten Island buses that use 34th Street?

I'm working on it, George. Thanks for the information!