Why replace the Tappan Zee Bridge?

Okay, I'm still not getting the answer I want. 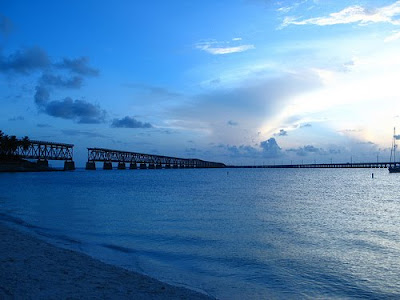 Photo by Flickr user Fovea Centralis
I think the latest estimate is $8.3 billion dollars to replace the Tappan Zee Bridge. Some of it may come from tolls, some may come from a "public-private partnership," some may come from the Tooth Fairy, but most of it will come from us taxpayers. I think we need to know what the public purpose of that spending is.

So far, all I've heard from the State DOT is, "Rehabilitation is not an option." Okay, fine. I've heard from Adirondacker 12800 about how the shipworms will eat the bridge if we don't do something. Okay, fine. But what's the point of the bridge in the first place? Why not just tear it down or prevent people from driving on it, like we've done with so many other bridges? Why do we have a bridge there?

I've never gotten any comments from DOT or Thruway staffers involved in the project, but I would be interested in hearing from them: why did the "no build" scenario in the Alternatives Analysis (PDF) involve maintaining the bridge's current capacity, when all the other documents show that they know perfectly well that there will have to be some "building" to maintain that capacity? Doesn't that violate the some kind of project review law? What would a true "no build" alternative look like?

I'm particularly interested in hearing from Kate Slevin, Veronica Vanterpool and Steven Higashide of the Tri-State Transportation Campaign, who last month wrote to the man who is now Governor, asking him to drop the commuter rail portion of the project, and on Friday reiterated that call, specifying that the "highway improvements" (widening) could be dropped as part of the scaling down. That would bring it down to around $5.2 billion dollars for the bridge, plus $900 million for bus lanes or $3 billion for a busway. What do we get for the money?

And yes, I am being Socratic here. I do have an answer in mind. But I'm being open-minded about this, and if someone can come up with an answer that will persuade me, I will change my mind. Let me tell you in advance some things that won't change my mind. I don't give a rat's ass about "mobility"; it's a means to an end, nothing more. And "reducing congestion" is a fool's errand when you're talking about building highways, so I don't want to spend $8.3 billion dollars for a "congestion reduction" project that won't. Finally, I'm not likely to be impressed by anything that takes the NYMTC population and economic projections as a given.

If you need data, the project documents are here.

Anyone want to give it a crack? How 'bout you, Joan McDonald?
Posted by Cap'n Transit at 1:47 AM

At least Joan McDonald might be capable of answering your question. In Colorado our new head of the Department of Transportation does not have the education or experience to do a good job.

The studies that I have seen of bridges in Asia seem to suggest that having lots of bridges is a good thing, but that what is best to run over those bridges varies. Pedestrian bridges seem to promote economic growth the most, and they also seem to enhance quality of life. Whether a bridge should have cars or buses or buses depends on what the nearest bridges carry. Variety is good for economic growth.

The cost of this bridge, at this point, is not recoverable under any reasonable traffic projection. I don't understand how a toll bridge in a heavy corridor can never pay for itself. It defies logic.

The reason why the Tappan Zee needs to be replaced in some way, shape, or form is because towns have sprung up on both sides of the bridge, and getting rid of the bridge could have a devestating economic impact on the region.

Obviously, the ideal thing would be to just rebuilt the bridge, except to only build the transitway, so that people aren't without a form of getting across the Hudson. Of course, the problem is that it's also a regional link (people crossing from upper NY State going to Connecticut have to use the bridge), so a compromise could be to just have 2 lanes in each direction, and then put a transitway on it. In another 100 years, if/when oil becomes unaffordable (and interstates start being replaced with rail lines), the bridge can be rebuilt without the automobile option.

Seems to me that the shortsided purpose of this new bridge is to provide jobs. When this project is finished, where will the jobs go? ans. build another highway or another bridge. If you build more roads there will always be more traffic. Ugh! I see what's happened on the big L.I.E. ANTIEROAD