Before the Tappan Zee Bridge 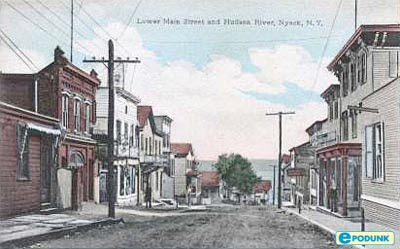 I've talked before about the amount of sprawl that the Tappan Zee Bridge has generated west of the river in Orange, Bergen and Rockland counties. One thing that's often overlooked is that this area did not go straight from farmland to sprawl. Before 1950 it had an extensive railroad network, moving goods, travelers and commuters between the areas north and west of the Hudson Highlands and boats on the river.

The New York Central's West Shore Line ran from Albany along the river to Weehawken. The Erie ran from Binghamton and Port Jervis to Piermont, and later to Jersey City, splitting into the Main, Bergen County and Northern branches. The New York, Susquehanna and Western ran from Stroudsburg and Warwick to Edgewater. The various docks and junctions were significant employment centers, but the area also contained vacation destinations, bedroom communities and industrial uses such as rock quarrying and ice harvesting.

With the opening of the various bridges and tunnels and the highways connecting them, truck freight became more economical than rail. At the same time, new refrigeration technologies made ice harvesting unnecessary, and the creation of various mountain parks put an end to rock quarrying in these counties.

The bridges, tunnels and highways also put the area within easy commuting reach of Manhattan jobs. The housing crunch created in the city and inner suburbs by building height restrictions, racism and crime made even houses in Orange and Ulster counties desirable. The result is the sprawl we see today. That sprawl is real, and it represents an outrageous amount of wasted effort. But if we look, we can see the area's transit-oriented past. That can be the foundation for a sustainable future.

Yes, exactly. So many American cities were proto-transit cities (more on that on my blog, later) but converted to car cities...

One nitpick: wasn't the Northern Branch part of the West Shore Railroad rather than the Erie?

Some of us in these "River Towns" are trying to reverse the clock. As these towns continue to grow, New Urbanist developers are trying to attract wealthier dwellers, leading to calls for the removal of bus lines off of the Main Streets. Noise complaints are a big factor, but also that those that rely on the buses are generally poorer immigrants and not represented in local government.

This just happened in Dobbs Ferry, where one of the bus routes was moved out of downtown to Route 9. It is "only" 150 yards away up a steep hill to a route with no pedestrian amenities, but none of the users -- generally working-class immigrants -- ever complain publicly.

Au Contraire, the quarrying continues in Haverstraw and Stony Point. Check out some older Erie line maps in Rockland County on my blog: http://haverstrawlife.com/2011/03/09/our-history-of-trains/ The line through Piermont actually ended at a terminal station on Main Street in Nyack (where the Riverspace Theatre is now/M&T Bank). That line connected with the now-Pascack Valley Line at Nanuet Junction. The Spring Valley Line continued north all the way to New Main Street in Haverstraw. There was also a New City branch from Nanuet. An expansive rail network indeed.

. I am really impressed with your writing skills and also with the layout on your blog. Is this a paid theme or did you modify it yourself? Either way keep up the excellent quality writing, it is rare to see a great blog like this one today..
Brooklyn Limousine Service

It's amazing how they'll complain about a bus running every 30 minutes, but they won't say anything about the noise from automobiles?

@George K: That was the #6. No idea why the other bus lines were not moved. I haven't figured out how it came about. But the Bee Line Bus rep said Dobbs Ferry asked for the change. It is not something that Bee Line wanted or asked for.

The problem is that those who use the bus are not those who generally speak up about stuff.