The end of sprawl has come to Westchester and Rockland 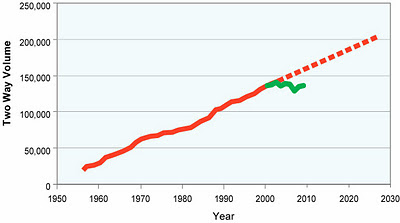 The New York Metropolitan Transportation Council (NYMTC) projects that both population and employment growth will continue (see Figure 1-4). Between 2010 and 2047, the populations of Rockland and Westchester Counties are expected to increase by 50,000 and 134,000 residents, respectively. Employment is projected to increase by 47,000 jobs in Rockland County and by 160,000 jobs in Westchester County during this timeframe. This growth in population and employment will increase daily volumes across the Tappan Zee Bridge for the next several years. (PDF)

Figure 2. Historical bridge traffic volumes and capacity constraints. "Getting Up to Speed" (PDF, 2007)
None of those is true. I've already shown how the traffic projections are wrong. You might object that this leveling is due to the recession, and if the population and job projections are correct, traffic will go up. Well, that's wrong too. The number of cars trying to squeeze onto the bridge began to level off in 2000. This mirrors general trends in driving habits. 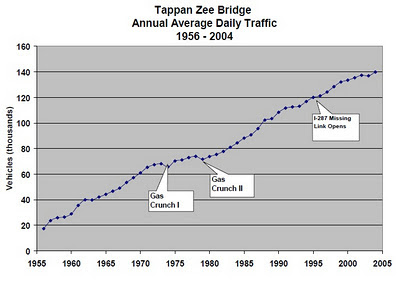 Figure 3. Historical bridge traffic volumes, gas crunches and highway openings. "Rockland County Tappan Zee Corridor Transit-Oriented Development Study (PDF, 2007)
This weekend I found two great charts from 2007 that also riffed off the NYMTC projections. This one, produced by the the Tri-State Transportation Campaign, shows that traffic on the bridge is self-limiting. When it becomes too inconvenient to drive across the bridge, people find another way to get to work, or another job, or another place to live. The other, produced by the Regional Plan Association, shows that the traffic is limited by the cost of driving and encouraged by new highway construction. We really shouldn't have to spell any of that out for anyone, but there it is. 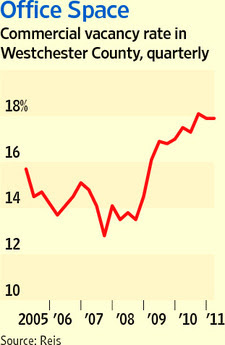 Reis via the Wall Street Journal
What about our second assumption, then, that there will be job growth in Westchester and Fairfield? Reports suggest that that supply is leveling off. Employers are finding that if they locate in a downtown area, they attract more creative and dynamic employees. In general it's more fun to work in the city where you can eat a different cuisine for lunch every day than in some office park where you eat at the corporate cafeteria every day instead of spending your lunch hour stuck in traffic on the road to Applebee's. "It's a switch back to 'I don't want to be isolated in an office park, I want the vibrancy of a downtown, public transportation and the ability to shop and walk around'," Gerard Hallock, executive managing director of Colliers International, told the Wall Street Journal.

Finally for our first assumption, that people are going to keep moving to Bergen, Orange and Rockland counties. Let's look at the housing market there.
There's a glut of housing in these areas. No one wants to live in New City because you can't get anywhere without driving, and driving is dangerous and uncomfortable. But mostly, since we've run out of money and space to build new roads, and since the price of gas has risen, driving is slow and expensive. Housing prices are down in Bergen, Orange and Rockland. In contrast, if you look at housing in Westchester, where housing is denser and people can commute to the city by train, prices are recovering.

New York Home Values - Interactive chart
So let's review: we're spending five billion dollars to build a bridge for people who live in Rockland to drive to jobs in Westchester, but people aren't moving to Rockland, jobs aren't moving to Westchester, and the people who live in Rockland aren't going to drive across the bridge if it's not convenient.

This is a project that kinda sorta made sense ten years ago if you didn't question the projections too much. In 2011, it's clearly a waste of money. It's a zombie project, one that was almost dead for good until our governor and president reanimated the corpse. Thanks, guys!
Posted by Cap'n Transit at 2:31 AM

Not all transportation projects are designed to meet current demand. Some projects are actually designed to accelerate demand. If it is easier to get into the city from upstate, then that will help us sell this new subdivision we just built. That doesn't make it "right", but it may explain the data you're describing.

"If it is easier to get into the city from upstate, then that will help us sell this new subdivision we just built"

Sure, but would most voters pay $5 or $10 billion ($1000 from each family in the State) to subsidize developers? No, people support road projects because they think they are needed to "get traffic flowing."

If most New Yorkers realized that this bridge widening isn't needed because of traffic, they wouldn't be willing to support the cost.

Good point, Leigh! I addressed this a couple weeks ago. It may work for a few years, but then it'll collapse.