From tragedy to farce in Bushwick

Today Streetsblog had a post about a few blocks immediately to the east of the Knickerbocker Avenue el station in Bushwick, where development is hostile to pedestrians. 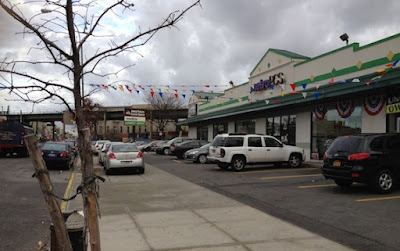 Sprawl development in Bushwick. Photo: Christopher Taylor Edwards.
I was curious, so I pulled up the zoning for the area on City Planning's handy new ZOLA map (also on this PDF). The block with the military recruiter is zoned R6 with a C2-3 overlay, and the equally sprawly Burger King across the street is in a C4-3 commercial district. The C4-3 zone allows a floor-area ratio (FAR) of 3.4. The C2-3 overlay only allows a commercial FAR of 2.0. Both allow a residential FAR of up to 2.43, depending on setbacks. The developers could have built taller on both blocks.

These two zoning categories have identical parking requirements, and if the Burger King qualifies as "Refreshment stands, drive-in," it would have to have one parking space for every 400 square feet of floor area, with no waiver (PDF). The Burger King is about 5000 square feet, meaning that it's required to have thirteen spaces. In the parking lot there are about sixteen. The phone store is a bit more of a mystery, because when the amount of parking required is less than 25 spaces per lot, it is waived, but the developer built the parking anyway.

Noah Kazis writes, "Zoning may not be the chief culprit here. Head a block west along Knickerbocker, or follow the elevated subway tracks along Myrtle, and you’ll find vibrant commercial corridors with stores facing the sidewalk, not a parking lot. Even so, this seems like a location crying out for an intervention from New York City’s planners and economic development officials."

So if the zoning created that sprawl to the east of the el, why is there multistory mixed-use urban development under the el and to the west? The key is that the zoning code only covers new development, and all the buildings to the west were built in the 1930s, before the current zoning code was adopted in 1961. 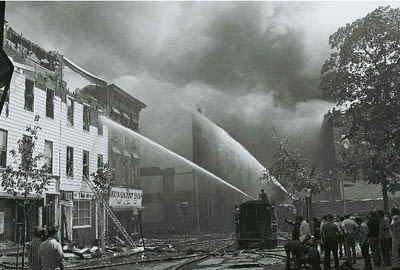 The All Hands Fire. Photo: FDNY.
The next question is, why were the block with the Burger King and the block with the phone store new construction? What happened to the buildings that were there before 1961? To find that out, I found the area on the Digital Tax Map, and plugged the Block Number into ACRIS. There were some records referring to a "Bushwick II Urban Renewal Plan." And that led me to the fire. In 1977 the All Hands Fire was started by three boys playing in an abandoned knitting factory. It destroyed several blocks of stores and apartments. For years, not much was built except the ugly sprawly police station.

I haven't found much about the history of the Burger King block specifically, but the block with the military recruiter and the phone store was sold by the City in 1983 to a guy named Ralph Goffner. The deed contains the interesting clause that "The development and use of the subject property is limited to off-street parking purposes only, and any successor in interest shall not use the premises for any other purpose." Clearly, Goffner is now using the premises for other purposes as well as parking. I'm assuming that the City relaxed that covenant at some point, but I haven't found documentation. If so, they may have required that Goffner continue to use some of it for parking.

The bottom line is that it's not 1961 in Bushwick, and it's not 1983. It's 2011, and we now know that large curbside parking lots are anti-urban and anti-pedestrian. Single-use single-story buildings are pretty out of place next to a train station as well. The City should rezone the area to allow for denser development without required parking - C4-5A or something like the R6N district that I proposed in July with a C2-5 overlay.
Posted by Cap'n Transit at 11:43 PM

I used to live just a block away from there. The laundromat I used is just out of frame to the right.

Those two lots are certainly out of place in the neighborhood and there's every reason to redevelop them. There's a lot of new construction only one stop away near Central, and there's no particular reason it shouldn't come out further.

fwiw, I think Ralph Goffner sold his BK franchises a long time ago.