You know that big ugly boulevard near you? Maybe when it was built it was the Champs-Elysées of your town. Maybe it wanted to be, but things didn't turn out quite right. Or maybe your town planners had a less ambitious model, like the Miracle Mile or Route 66.

Whatever the ambitions, today that boulevard is a stroad. It's one of the most dangerous places to drive or walk, but people keep going there anyway, because that's where the Target and the Old Navy and the Barnes and Noble are. Even though it's one of the most popular shopping streets, it brings in a relatively small fraction of the tax revenue.

There are a number of remedies that can be taken for a stroad boulevard (boulevaroad?). I want to focus on one particular remedy that combines traffic calming and transit expansion; we can call it green tracks.

The poster child for this method is Paris, in particular the Boulevards des Maréchaux. This is a ring of boulevards that runs just inside the city limits. They replaced the "rue Militaire" that ran along the inner extent of the fortifications built between 1841 and 1844 under Prime Minister Adolphe Thiers and torn down between 1919 and 1929 after they proved unable to stop heavy artillery in the Franco-Prussian War. The road is divided into 22 segments, each named (more or less) after one of the military leaders who bore the rank of marshal under Napoleon. 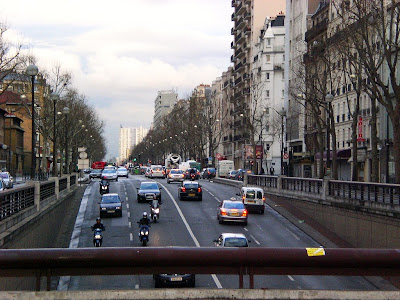 Paris's Boulevard Ney. Photo: Minato Ku
I've visited a few of the Maréchaux many years ago, and they were all pretty unpleasant places to walk. Definitely not what comes to mind when you think of a stroll through Paris. Even though they had trees, cafes and fairly wide sidewalks, they were noisy and felt dangerous. The 4-5 lanes of unbroken traffic and the long gaps between crosswalks made the boulevards feel like a barrier; I rarely crossed them, and usually took parallel streets when walking home from the metro. I never took the mixed-traffic "PC" bus, after trying once or twice and finding it slow and infrequent.

At its core, the design of the Maréchaux privileged cars at the expense of pedestrians and transit riders. The city of Paris found an excellent way to adjust that balance in favor of the more sustainable users. They built a trolley.

Here in the United States, we have basically two ways of building a trolley. We can build "light rail" which operates primarily in an old rail right-of-way or highway median with some mixed-traffic or dedicated segments, or we can build a "streetcar," which operates entirely in mixed traffic. Jarrett Walker in particular is fond of slamming streetcars for offering no mobility improvements over buses. Both, notably, minimize the amount of street space reallocated from cars. 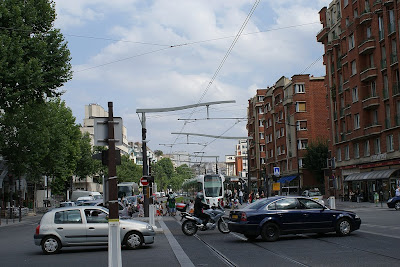 Boulevard Victor with green tracks trolley. Photo: Minato Ku
The Tramway T3 takes a third approach. Its entire route, except for intersections, is physically separated from all other vehicles. This helps trolley passengers get to their destinations faster, because they are much less likely to get stuck in traffic. To underscore this point, and to simply look nice, the right-of-way between and around the tracks is covered with sod. This evokes the grassy medians where trolleys have traveled in other cities - for me particularly, the "neutral grounds" of New Orleans. 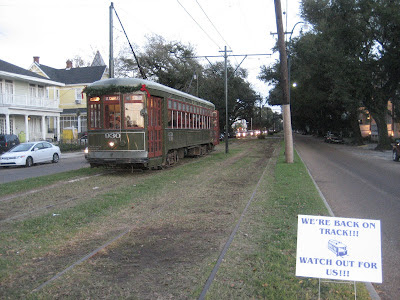 The Saint Charles Streetcar in New Orleans. Photo: Infrogmaton / Wikipedia.
The right-of-way of this new Paris trolley was not previously a train line, or private property. It was street. Two lanes of these boulevards were simply taken from cars and reallocated to transit. The sod has the additional function of marking the right-of-way as "not car space" and thus discouraging any use by cars.

The last time I was in Paris, the T3 was not yet running, but the street space had been reallocated. It made a huge difference. There weren't as many cars, and they were going much slower. The noise was much less oppressive. Crossing the boulevard was easier and felt much safer. There were two sets of pedestrian refuges at each intersection, not just one. But wherever I've seen street-running trolleys, they're always more predictable than cars, and therefore safer. They almost never leave their tracks.
Posted by Cap'n Transit at 1:38 AM

I created a Flickr group dedicated to showcasing photos of transit (trains as well as buses) running over grass.
http://www.flickr.com/groups/1641257@N23/

Boston has three stroads like this, with a separated trolley in the median. Commonwealth Avenue, Beacon Street, and Huntington Ave. Sometimes I wonder what it would be like if the trolley wasn't there, and I had to cross 8 lanes every day. Not pleasant.

Though I have to say, they run pretty slowly, because of bad operational practices, and because cars are willing to block intersections in front of trains.

Several of Portland's MAX lines (the Yellow along Interstate Avenue; the Blue along E Burnside) were done in this way--a four or five-lane stroad was turned into a two-lane street with light rail in the median.

One advantage that streetcars do have over local bus, as far as traffic calming goes--is that they are effective traffic calming devices themselves, and unlike busses, there's far less temptation to move their stops to the curb in order to get 'em out of the way of cars. It's not a BIG advantage, but it's something.

regarding the photo you you've tweeted; it is a tram in Milan.

In Italy there are only four "heritage" tramways left: Milan, Turin, Rome and Naples and of course they offer the most pictoresque views.

In Milan there's also the only "heritage" suburban tramway left: Milano-Desio. If you like pictures, here's a nice one

Here is the tram depo

Technically speaking, "trolley" refers to the type of power pickup on a vehicle-- the trolley pole. You can have trolleybuses, trolleyboats, etc. and most modern rail vehicles are not trolleys-- they use pantographs for power pickup. (The one notable exception to this is Toronto, as well as many "heritage" streetcars.)