Why I care about transportation in the suburbs

If you read my posts you'll notice that I live in the city, but I talk a lot about transit and roads in suburban counties like Rockland and Bergen. You might be wondering: why do I bother? Why not just let them have their roads and parking lots, and focus on my own transit and sidewalks? 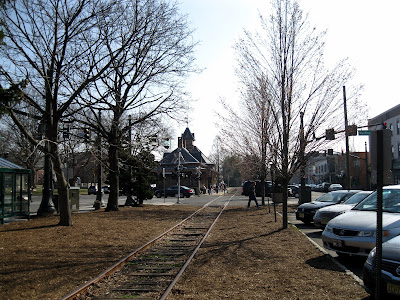 Sometimes I even ask myself that, but I actually do have a good reason, with several consequences. The fact is that we live on one planet, in one country, and in one region. Within that region, I live in one state with lots of suburbs in it. New York City is not hermetically sealed off from these suburbs. They affect our lives, in terms of carnage, pollution, resource consumption and socialization. And of course, they affect our lives politically.

The air and water pollution from suburban cars gets borne by wind and water currents and winds up in my lungs and on the beaches I go to. Every gallon of gas burned in one of those cars is one less gallon that will be available to my grandchildren for energy, for plastic or for fertilizer. Every ounce of steel and rubber is one more ounce that will not be accessible without energy-intensive recycling. And of course, when they want "parity" for their roads, it's our tax dollars that go to build them, and rebuild them, and widen them....

The suburbs also affect our lives culturally. In my neighborhood in Queens, the non-car-owning half of the population primarily looks to Manhattan and its streets, while the car-owning half mostly looks to Long Island and its malls. But there is a large middle chunk of the population that looks both ways: drivers who take the subway in to see a Broadway show and walkers who bum rides to Roosevelt Field and Costco. It's especially noticeable as a parent of a small child, because many other parents, and magazines like Queens Parent, orient their lives around car-dependent destinations like the Alley Pond Environmental Center and the Long Island Children's Museum.

Most importantly, they affect our political lives, which means that they exert control over the laws and budgets that affect transit and walking. The leaders of the fights against congestion pricing and the Ravitch plan were legislators from Westchester and Long Island, but also from eastern Queens, the northern Bronx, southern Brooklyn and Staten Island. Drivers from the fringes of the city have provided critical margins for Rudy Giuliani, Christine Quinn and George Pataki.

It's true that there are plenty of politicians in the City who drive and who pander to those who drive. But many of them are on their way out, and others are changing their tunes. We need to make sure that the suburbs change their tunes too. We can't let the suburbs do what they (or at least their leaders) want. Their decisions affect our money, our air, our water,our culture and our safety.
Posted by Cap'n Transit at 11:43 PM

I think the choice between being oriented towards Manhattan or suburban areas is something that's mostly overlooked. Usually a more black and white city-or-suburb division is put forth.

In reality there are huge swaths of the outer boroughs where having a car isn't out of the question, but you're still close enough to the subway to make use of Manhattan's amenities. I'd argue we should focus transportation policy on these marginal "swing" users, who could be goaded into using the subway more if more frequent service were provided.