Our bodies and our auto bodies

I recently talked about the power games that drivers play with each other, how they often involve using cars as weapons, shields or placeholders, and how that can kill pedestrians and cyclists if the drivers forget that we don't have two tons of steel protecting us. In a counterpoint to that, I have noticed that drivers often perceive their cars as parts of themselves. 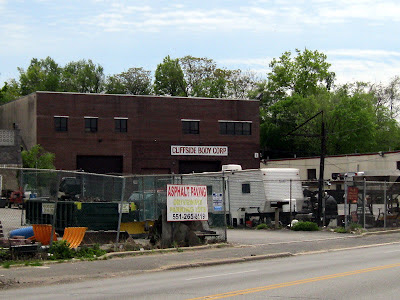 You've probably all had the experience, as car passengers if not drivers, of looking for your car in a large parking lot and saying something like, "I think we're over here." It used to drive me nuts to hear myself saying that. I would correct myself: "No, we're right here. The car is over there." But it's very easy to think of things that way. After all, when we're driving around, most people just see our auto bodies and not our flesh bodies inside them.

People often get very protective of their auto bodies. I personally never have, maybe because I've only ever driven used cars and rentals. It may simply be that it's inconvenient and expensive to repair damage, and even if you can get a dent out the car still doesn't look like new. But I think there's something more, due to the way drivers identify with their vehicles.

Combine this protectiveness for the driver's own auto body with the casual disregard for the flesh bodies of pedestrians and cyclists that comes from power games, and the result is homicidal craziness. I've read tons of stories of cyclists and pedestrians who tapped on the fender of a car, and even done it myself occasionally. It is invariably done in response to some kind of dangerous move on the part of the driver. Often the victim, either a pedestrian with no warning system but their own voice, or a cyclist with no horn and only a little bell, was simply trying to get the driver's attention. Sometimes they hit the car out of rage, but only intending to express their frustration, not to cause any damage.

It never accomplishes anything worthwhile. Sometimes the drivers just zip away indifferently. Sometimes they roll down the window or even get out of their cars, shaking with fury and hurling threats. "You touch my car?!" I've heard of fistfights resulting, or weapons. Even worse, sometimes the drivers stay in their cars and use them as weapons to try to harm the cyclist or pedestrian.

When a cyclist or pedestrian talks later about an incident like this, in person or on a message board, some condescending jerk will often lecture the victim about the folly of hitting someone's car. Thank you for sharing your wisdom. Yes, it's a really bad idea and it can get you killed. But let's step back from the pragmatic perspective and reflect on how deeply, insanely divorced from reality the driver's point of view is. On one side we've got a flesh-and-blood human who's just been put in mortal danger by someone with two tons of steel. On the other we've got a person who probably has no damage or danger at all to their life or property, and at the absolute worst has a fifty dollar repair job. But the person who is in no danger is making homicidal threats to the other.

This kind of thing happens every day on our streets. It is the very definition of bullying and injustice. And it has to stop. It will not be stopped by electric cars, or fuel cells, or natural gas. It will only be stopped by shifting to a system where there are no cars.
Posted by Cap'n Transit at 11:19 PM

I don't think the "We're over here" is indicative of too much. It's normal for people to refer to avatars in many kinds of gaming in the first person. "I died" is much more common than "my character died." This is true not just of hardcore gamers, who you could say treat some of their characters as extensions of themselves, but also of casual video game players. It doesn't mean anything - it's just a convenient shorthand.

There's at least two parts to this. One is the natural human response to treat sufficiently familiar tools as extensions of ourselves. (Just listen to a fixed gear rider talk about their bike for an example relevant to transportation).

The other is the marketing apparatus that has saturated Americans with the idea that their car displays their status. Thankfully the younger generations seem largely immune to this, preferring to pour their identity into an iPad instead. (Say what you will about that, but no one has run over a person with an iPad).

I'd also like to see a legal shift of liability and responsibility onto the party with the more powerful and dangerous vehicle. Similar to right of way rules while sailing, liability should automatically be placed on the more dangerous vehicle until proven otherwise. I would really like to see a police department take complains of harassment or negligence seriously even in cases where the cyclist doesn't end up dead or in a hospital.

One of my least favorite parts of my commute home via the R train to the Prospect Ave stop in Brooklyn is having to cross the intersection of 4th Ave and Prospect Ave to get home. 4th Ave is 6 lanes of high speed traffic. Prospect Ave itself isn't bad, but the off ramp from the Prospect Expressway right there is a drag strip. I've nearly been mowed down on numerous occasions, usually by vehicles turning at a high rate of speed. There is no traffic calming whatsoever at this intersection so the cars tend to cut the corners and take the turns fast. Once, a large SUV turned off of 4th Ave onto Prospect as I was crossing (with the light). He very nearly ran me over. In frustration (and stupidity) I smacked his bumper. He actually stopped, got out and began screaming at me. I simply ignored him and kept going. Luckily, he loved his beloved gas guzzler too much to leave it unattended to attack me.

I've tried contacting my council member and 311 to try to persuade the city to implement some kind of traffic calming, to no avail. I finally gave up and now cross 4th Ave at 17th, even though I live up Prospect. It's a marginal improvement, but more than anything the city has offered.