If you care about the Northeast Corridor...

Last week I mentioned that the Northeast Corridor between Washington, DC and New York City has a wealth of transit options, all of them generating operational profits for the transit provider. Credit for this success is in part due to the citizens of New York and New Jersey, who have resisted pressure from road builders to destroy town and country for planned highways like the Somerset Expressway and the Lower Manhattan Expressway, and in part due to the managers at the Port Authority of New York and New Jersey, who implemented high tolls with congestion pricing. 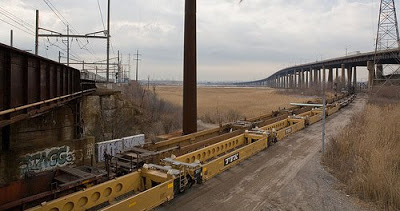 The Northeast Corridor (left) and the New Jersey Turnpike (right) compete with each other across the state. Photo: David Pfeiffer / Flickr.
When our governments did not simply continue to build roads and keep the tolls low, people needed alternatives. As car traffic has increased on the New Jersey Turnpike and parallel highways and the price of gas has risen, people have steadily switched to trains and buses. The result is that Northeast Corridor passengers now subsidize the rest of the Amtrak network, and a whole range of bus operators from Eastern up to Vamoose Gold make enough money to not just pay for gas, wages and maintenance, but for new buses, and even generate a profit.

Those options are under threat now from unchecked government spending to interfere in the market, and the person directing this interference is none other than that darling of the right and famed budget-cutter, New Jersey Governor Chris Christie. You may remember, specifically, that Christie cancelled the ARC Tunnel project because he thought it would place too great a burden on future generations of New Jersey taxpayers.

It turns out that Christie didn't just lie about New Jersey's share of the cost and redirect three billion dollars to road projects. Tri-State has the news (from the Star-Ledger) that even three billion dollars isn't enough to finish those projects, and the Turnpike Authority will borrow an additional $1.4 billion to complete them - putting that burden on future generations of New Jersey drivers and taxpayers.

One of those projects in particular is a really bad idea and could seriously undermine transit in the Northeast Corridor. There is a bottleneck on the New Jersey Turnpike between Mansfield and New Brunswick where the highway is "only" six lanes wide. A lot of that $4.4 billion is being spent to widen the Turnpike to twelve lanes in that section.

Eventually, as with most road expansions, those twelve lanes will probably be just as congested as the six lanes are today,. Or maybe not. If other driving costs like gas and insurance continue to rise, driving may drop there just as it is all over the country. But for a while it will be smooth sailing, and that could spell trouble for Northeast Corridor transit.

It's no coincidence that the Pennsylvania and Lehigh Valley railroads started to lose money after the Turnpike was opened, or that the Erie and New York Central lost money after the New York State Thruway was built, or the Delaware, Lackawanna and Western went downhill after Routes 78 and 80 opened. The Northeast Corridor, which is the successor to the Pennsylvania Railroad, is just beginning to recover.

Just as those highways drew passengers from the parallel railroads, the time savings on this newly widened Turnpike will draw passengers from the trains and buses of the Northeast Corridor. This is massive government-sponsored, debt-financed sabotage of a profitable market, done by a Republican with a reputation as a budget-cutter. Combined with the way the Democrats gummed up curbside bus pickup here in New York City, we may well see a drop in Northeast Corridor bus and train ridership over the next several years. I hope I'm wrong.

After the Port Authority raised tolls in 2010 there was a huge stink. After Christie cancelled the ARC Tunnel there was outrage from transit advocates. So far this massive highway widening hasn't gotten much more than a few angry Tri-State blog posts, and nothing from budget hawks. Will anything change?
Posted by Cap'n Transit at 1:25 AM

What if they widened the road with HOV lanes? Would that be an acceptable compromise?

I dont know if youve ever driven on a highway before, but 6 lanes is just claustrophobic. You need at least 10 to feel comfortable. 12 is good, but in reality it should have 15 lanes so people can really spread their legs out.

How dare you want drivers to have to sit in traffic, etc. We should just keep trying to out-subsidize driving, we should demand an additional and much needed Hudson river crossing for trains. Oh, wait...

If standing room only trains are good enough then so are puny six-lane highways. When people are fairly informed what they will have to pay in toll and tax hikes for Earth's next great road widening project, they'll say the same.

Let's start with deciding what we can afford to spend and then choose the most effective places to spend it, instead of whatever the hell the Infrastructure planners are used to doing.

The Turnpike Authority receives no subsidies from the state budget. The 1.4 billion in debt is only on the turnpike authority, not the state. Not the same as the ARC, in which cost overruns would have been dumped on all taxpayers of the state.

The worst I could see happening is the turnpike authority raising tolls to cover this new debt, which really isn't that big of a deal.

It should have been done 20 years ago.

Where are you on the idea of some extra freight rail crossings of the Hudson River? Such as Cuomo deleting the lower deck from the TPZ Bridge replacement?

Doug, let me remind you that this blog is for people who share the goals listed at the top of every page.

I agree that we should have more rail crossings, including ones usable by freight trains like the Cross-Harbor Tunnel and the Poughkeepsie Bridge. The Tappan Zee Bridge should be torn down and not replaced. No amount of rail will justify that much car infrastructure.

So long as the Turnpike is funding it from their own resources and not relying on other parts of the State's pie--that is, acting like the semi-public corporation they are--then they can do what they want, when they want (within reasonable bounds, of course).

And may I remind you that's how those railroad tracks got there in the first place?

Steve, Doug said "should." Your comment is all about "can."