The news is that the Long Island Rail Road East Side Access project, initially forecast to cost $4.3 billion and be completed in 2009 is not due to open until 2023, and it will cost $10.8 billion. Some have faulted the tunneling process and the engineers' estimates of the cost. Some have faulted the decision to run the trains into a deep cavern under Grand Central rather than on the loop tracks. I agree completely. But it recently occurred to me that a big part of the expense and delay - what makes it "the biggest " is a tunnel. Not the tunnel under the East River, that was dug 44 years ago. A tunnel through unstable soil in a filled swamp under the Sunnyside rail yards.

And why dig a tunnel? If you're building a new track that crosses an old track, the cheapest option is an at-grade crossing, but with two busy new tracks crossing lots of existing tracks - including storage tracks with trains parked on them and eight of the busiest tracks in the country - it's easy to see why the design team ruled out that option. It's harder to see why they ruled out a bridge. The yards are in a valley. Just a few blocks west, Queens Boulevard and the three tracks of very busy #7 train line have been crossing them on a double-decker bridge for over a century. There are five or six other bridges, depending on how you count.

There's no concern about blocking the sunlight because the only people in that yard are railroad employees. Sometimes a tunnel is chosen over a bridge to mitigate noise, but the trains will emerge from the tunnel close to the densest residential population, in Sunnyside Gardens. Grade elevation isn't a major concern because the yards are wide and the northernmost tracks are elevated, allowing for a relatively gentle slope, but if the grade is too steep, it would be possible to put in a bend. 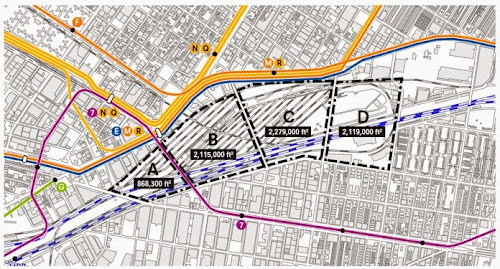 Map: New York Observer.
And yet in the Final Environmental Impact Statement there is only one option considered for the Queens route: "crossing beneath the railroad yards." There's only one real reason I can think of to tunnel instead of building a bridge: a tunnel would get in the way of the convention center.

For years, developers, city planners and politicians have been quietly preparing to build a deck over the Yards and develop the area. Because NIMBYs were so successful at "protecting the residential quality" of most of the city's neighborhoods, the amount of new housing that can be built as of right in the city is not enough to accommodate everyone who wants to live here and bring rents down. Planners and developers see one of the largest uninhabited areas in the city, right next to the huge Queens Plaza station and the underused 36th Street stop, and they want to put something there. It figured prominently in the city's discussions about Olympic development, and a report from Alex Garvin and Associates to the Economic Development Corporation in 2006 called it "the city's single greatest opportunity to increase the housing supply and simultaneously improve the quality of the public realm."

Building over a rail yard is a strategy that made millions for the New York Central Railroad a hundred years ago. Railroad managers, now mostly government employees in the city, long to replicate that success. That was the idea behind the Atlantic Yards development in Brooklyn and now the Hudson Yards development in Manhattan, and they've got other yards in the Bronx to follow Sunnyside. Never mind that Atlantic Yards was a crappy deal for the MTA and the Hudson Yards isn't looking quite as successful as forecast. The city's elites are still hung up on the idea: in 2012 Dan Doctoroff found some interest for it at the Municipal Art Society.

If you look at the map above, the East Side Access tunnel is there, under sections B and C. If it had been built as a bridge, at least part of it would be right where the deck would go, and get in the way of some of the buildings and streets.

I don't know for sure how much the East Side Access designers were thinking about this. But if it played a role at all in their decision to dig a phenomenally expensive tunnel instead of building a bridge, then a significant portion of this multi-billion-dollar federally-funded "transit" project is actually subsidizing a possible future residential and commercial mega-project. Yay?
Posted by Cap'n Transit at 1:34 AM

You'd expect that if they wanted to develop the area they'd have put a train station there instead of at the intersection with Queens Boulevard...

"It's harder to see why they ruled out a bridge."

The 63rd St. LIRR tunnel under the East River is underneath a subway line. To get to a bridge, you have to get out from under the subway line and then rise up to bridge level. But wait, there's more! The Astoria line is in the way -- elevated. Because of the housing in that area, you have to stay underground until east of the Astoria line. By the time you can start rising to the surface, you've already reached the rail yards and you don't have enough distance to get elevated.

Look at the geometry before questioning decisions like this.

In particular, the ESA tracks are below the subway tracks through 21st-Queensbridge, and then have to continue below the 63rd St subway tracks, which themselves need to be below the main Queens Blvd tracks for the grade-separated junction. Above those tracks is the street, and above that is el. Perhaps it would have made sense to bring the ESA tracks up as quickly as possible and do a shallow cut and cover tunnel under the yard, building a temporary yard where the freight yard used to be. The connection to the mainline tracks would still be tricky, but I'm not sure that it would be any trickier. Ironically, there's already a fairly significant cut and cover section all the way from the end of the original 63rd St tunnel all the way to the edge of the Amtrak yard, with elevated yard tracks to cross it (carrying the yard lead to Arch St yard among other things). Sounds like the real reason behind bored tunnels is depressingly familiar: turf.