The missing denominator is pedestrians

Every year or so, the Tri-State Transportation Campaign produces a report of The Region's Most Dangerous Roads for Walking. It's important to talk about these issues, but in 2012 I suggested that since the roads are different lengths, the numbers of pedestrian injuries and deaths per road are not a great measure for ranking roads, and I ranked them instead by fatalities per mile, with the Bowery coming out on top. They seem to have completely ignored this, and this year's report compares the 89-mile Sunrise Highway (9 killed in 2010-2012) with the ten-mile Woodhaven Boulevard (8 killed in 2010-2012). Transportation Alternatives similarly compared roads regardless of length. 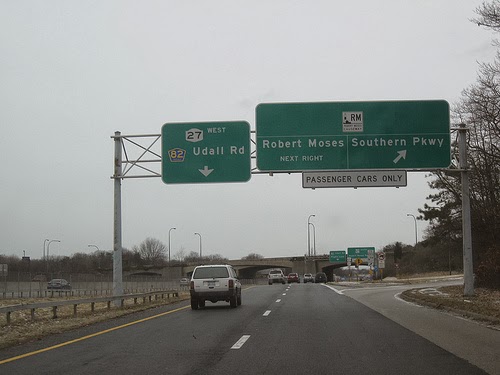 Sunrise Highway. Photo: Doug Kerr / Flickr.
But as threestationsquare commented on my 2012 post, the length of a road alone does not tell us enough:

Streets that have more pedestrian traffic (e.g. 14th St, Broadway) will naturally see more fatalities than streets that are so obviously dangerous that pedestrians avoid them (e.g. Queens Blvd), but it hardly seems reasonable to call the latter streets "safer". I would be more interested in data that divided the fatalities per mile count by some estimate of pedestrian traffic, so that I can estimate just how much risk I am taking walking near the street in question. Do you know any sources of data on pedestrian traffic counts?

The figure of fatalities per mile is useful because it tells us how many lives can be saved by a relatively concentrated improvement. Fatalities per pedestrian is important because it can suggest how many people are being scared away by bad pedestrian infrastructure. It's also valuable for individuals when deciding where to walk. If there are very few pedestrians in a high-fatality area, that means that everyone who walks there is at a high risk.

Pedestrian counts have been difficult to get in the past, because they involved someone standing on a street corner clicking a counter. The DOT theoretically has pedestrian counts of large swaths of the city, since they're required to take them when studying things like whether to put in a stop light. The city has been releasing DOT data on the web, but so far they have not released any pedestrian counts. I know that most of them are probably very outdated, but even out-of-date pedestrian counts could be useful.

Recently I've had more hope. A start-up called Placemeter has been collecting foot traffic data based on geolocated social media posts and a network of old smartphone video cameras. They created a coarse-grained map and shared some of the data with the Mayor's Office of Data Analytics to produce a Business Atlas. The idea is that if you open a store selling only gourmet rice krispie treats, you want to be in a place where a lot of pedestrians will see it. If you want fine-grained data, I'm sure Placemeter will be happy to sell it to you...

I'm all for the Business Atlas and business owners buying foot traffic data. I would even hope that this kind of data could convince a company not to build a suburban-style drive-up in a pedestrian neighborhood. It'd be nice if Placemeter could donate this information to activists fighting strip mall development.

I still want the DOT to release all their data, but I hope that Placemeter can give us up-to-date pedestrian count data so that we can measure fatalities per pedestrian. I don't want to ask them to undercut their entire business model, but it could save lives.
Posted by Cap'n Transit at 12:58 AM

Since the Chicago Transit Authority tracks and publishes the number of people who board and deboard at each and every bus stop, I've been using that data as a proxy pedestrian count as every single one of those passengers will have had to use a sidewalk near that bus stop at some point.

I can analyse the ped count for you if you'd like.

Which corridors are you looking at?

You could start w/Ocean Parkway from Church Ave to Ave L. Some corners had 7 collisions in Dec NYPD Crash stats, but we don't have pedestrian figures. Church & Ocean Parkway seems to be the the worse, but nice to confirm that.

Ill look it up.

Jan Gehl is opening an office in NYC. Maybe the city can create a Department of City Life similar to Copenhagen and contract Gehl's firm to start the measuring.

How does their city life department work?

How does their city life department work?