The New Jersey Department of Transportation will shut down two lanes of the Pulaski Skyway on Saturday, and recently Sarah Gonzalez was on WNYC with dire predictions of carmageddon.

My prediction is that these predictions, like most predictions of carmageddon, will not come true. There will hardly be any additional congestion. There is a simple reason: drivers are being warned in advance. In the recent Carmageddon episodes in Los Angeles and Seattle, not only were there dire warnings well in advance of the impending doom, but they were broadcast far and wide. When the time came, drivers took alternate routes or stayed at home, and the congestion failed to materialize. 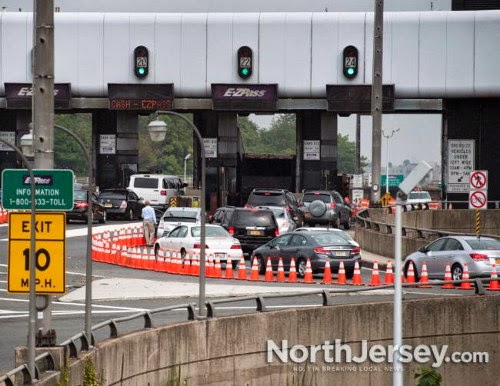 Photo: Amy Newman / NorthJersey
The contrast with "Bridgegate" just a few miles up the river is particularly revealing. In Bridgegate, as with the Pulaski, there were two approach lanes taken out of service, but with Bridgegate there was absolutely no notice given. Drivers didn't know that the George Washington Bridge toll booths were closed until they got there, and many of them didn't even know then, until they got close enough to see. The element of surprise makes a huge difference.

There are other factors, in particular the availability of alternate routes, but that factor favors the Pulaski. As Larry Higgs tells us, there are many ways to get across the Meadowlands or the bay, and several of them don't even require driving.

The best outcome, in fact, would be for habitual drivers to take a transit option, realize that transit isn't so bad, and shift to transit permanently, as they seem to have done in Seattle. The bridge is a major contributor to crashes and pollution in Lower Manhattan. The best way to encourage transit use would be to turn the two remaining lanes of the Skyway into exclusive busways, but charging a well-advertised market-clearing price on the Holland Tunnel would work too. Unfortunately, nobody took up my suggestions, and drivers will have a nicely renovated bridge when it's all finished, making permanent shifts that much less likely. Thanks, Chris Christie!

Unfortunately, on weekends for the rest of the year, the ordinarily-best-alternative route across the meadowlands (PATH) will require a transfer and wait at Journal Square, because the Port Authority refuses to through-run the trains there for no apparent reason.