Transit advocates, pedestrian advocates, urbanists and in general all the people who are trying to improve the quality of life in cities need to talk about gentrification. Not because improvements to transit or walking or urban quality of life lead to gentrification, but because some people think they do. Others, bizarrely, are scapegoating the people moving to urban areas, as though their migration were the result of either nefarious conspiracy or a spontaneous coincidence of individual greed. Some of these demagogues are willing to attack the transit and quality of life improvements, the people promoting those improvements, or the migrants themselves, in a desperate attempt to prevent this change. 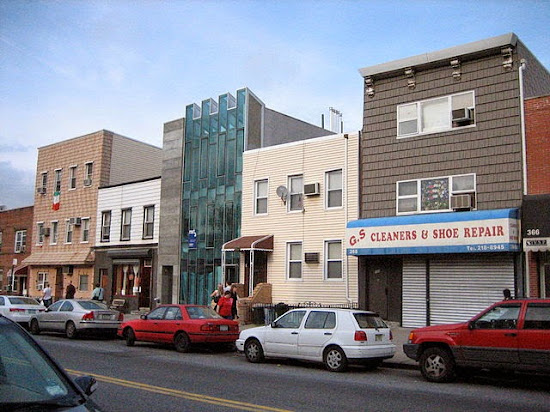 Graham Avenue, Williamsburg. Photo: Telethon / Wikipedia
The fact of the matter is that the transit and quality of life improvements are largely the effect, not the cause, of the move back to the cities. The suburban growth ponzi scheme and the hippie back-to-the-land fantasy have run out of money, and the jobs are leaving. As the jobs leave the suburbs and the country, the quality of life goes down, and people flee for the cities.

These migrants may be a bit insensitive, but they are not conspiring amongst themselves to take from city dwellers, and they are not acting out of greed and jealousy; rather, their own dislocation from their homes deserves as much sympathy from anti-gentrification activists as that of the people they are displacing.

This migration is much more powerful than the anti-gentrification demagogues. Even if they manage to keep cities as inconvenient as they are, people will keep coming. The only way they could stem the tide is if they somehow manage to bring the cities down to the level of the suburbs. Short of bringing back the crack epidemic and setting the South Bronx on fire again, I just don't see it.

The demagogues may not succeed in stopping the migration to the cities, but they can do some damage, and make cities, suburbs and country miserable places all around. Fortunately, some of them are motivated by a heartfelt desire to help others that has been twisted to scapegoating and destruction. They may be amenable to reason, and that is why we need to be prepared.

Really, it is the concept of "gentrification" as a thing that leads to this misradicalization. Gentrification may seem to be a neat, easily identifiable phenomenon - uh oh, there's a new coffee bar over here, and a vintage record store over there! - but the effects that people complain about are hardly that simple.

Even though some people may complain about restaurants and "hipsters," these are not the substantive concerns that others take seriously. The worst effects of gentrification are (a) rising prices and rents, which squeeze the budgets of old-time residents and businesses whose incomes have not risen, (b) displacement as those residents move to cheaper areas, (c) loss of services as the businesses close or move away, and (d) disconnection as people and businesses that are displaced may move to different areas and have difficulty keeping in touch.

In general, I'm not really swayed by the loss of services argument. I may mourn the passing of Big Nick's Burger Joint or Shakespeare and Company, but I actually think the Shake Shack burgers and the browsing experience at Barnes and Noble are better than their predecessors.

I'm also not troubled by displacement in itself: migration is a fact of life. The idea that the children of African Americans or Puerto Ricans who moved to the neighborhood forty years ago have more of a right to it than the grandchildren of Jews and Italians who moved there eighty years ago is just bizarre. The problems come when the displacement is too fast and too extreme, and scatters people who otherwise want to be together.

The real question is not whether to avoid or stop "gentrification," it's whether we can slow or ease the displacement, and make it so that when people do get displaced, they wind up in places that are almost as nice as the places they left.

In order to do that, we need to further unpack "gentrification." This migration is not a simple one: in fact, it is at least three migrations combined, and not all of them equally necessary. We need to do what we can to reduce that inmigration. The displacement is not automatically necessary: we need to increase the amount of housing and jobs in the city, so that the old-timers can live alongside the newcomers instead of being forced out. We need to make sure that poor city dwellers aren't simply being displaced to the same dangerous, unpleasant, disconnected suburbs that the middle-class migrants are leaving behind - with less ability to afford cars.

Will this convince the misguided radicals who see gentrification in black and white terms? Hard to tell. Will it help me feel better promoting transit and urban life? Yes. I'll talk more about these issues in future posts.
Posted by Cap'n Transit at 1:26 AM

I'm constantly grappling with this issue. One issue, the chain vs. local business, is one that somebody sent me this flyer about:

We need to do what we can to reduce that inmigration.

No, Arcady, because I think we can spread the economic opportunities around somewhat. There's lots of urban area currently underutilized.

Amateur Transporter, the chain vs. local question is a good one. It's muddied quite a bit by the existence of locally owned franchises, and the extent to which local businesses can profit from outside businesses.